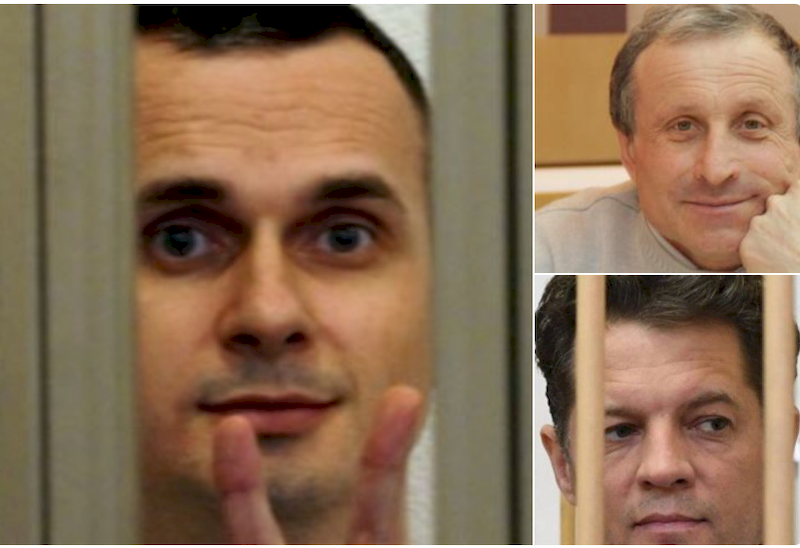 Ukrainian filmmaker Oleg Sentsov, sentenced in Russia to 20 years for non-existent ‘terrorism’, has become one of the laureates of the Andrei Sakharov Award for Courage, together with two other Ukrainians facing Russian persecution: journalists Mykola Semena and Roman Sushchenko.  The award for courage is well-deserved in all cases, but especially fitting given Sentsov’s powerful final address to the ‘court’ in Russia.  In those final words, he stressed that he was not asking the court for justice, as “a trial by occupiers cannot be just”.  Having echoed the words of the writer Mikhail Bulgakov’s character that the greatest sin is cowardice, Sentsov said that he hoped that Russians could learn how to not be afraid.

The award ceremony on January 31 was a poignant remake of Soviet times, only with a few critical differences.  Now instead of relatives or friends receiving awards in the West on behalf of imprisoned or exiled Soviet citizens, the ceremony took place in independent Ukraine, with three Ukrainian laureates unable to be there in person because of Russian persecution.

Oleg Sentsov has been imprisoned since May 2014 because of his opposition to Russia’s invasion and annexation of Crimea.  Russia is now holding him in a notorious prison north of the Arctic Circle, as far from journalists and foreign representatives as the Kremlin could achieve.  His award was received by his cousin, Natalya Kaplan.

Ukrainian journalist Roman Sushchenko has been held in Russian detention since his arrest, shortly after arriving in Moscow to visit relatives in September 2016.  His wife Angela and daughter Julia were in Kyiv to receive the award on his behalf.  Details of the award and of his ‘case’ were reported here earlier.

The third Ukrainian laureate was Crimean journalist Mykola Semena who was also honoured, together with the Radio Svoboda project Krym.Realii, for courage.

“On behalf of Mykola Semena I would like to thank our Russian friends [initiators of the Sakharov Award].  It is very important for him that Russian friends have awarded it for his words that Crimea is Ukraine….  This award to Krym.Realii is in fact an award to journalists working in Crimea under very difficult conditions when each day they could face arrest.   For them it is extremely important that their rights are valued.”

Russia is already holding at least 64 Ukrainians prisoner on politically motivated charges, either in occupied Crimea or Russia.

Of the three recipients of the Sakharov Award for Courage, Semena is the only one who is not behind bars.  The 67-year-old journalist received a two and a half year suspended sentence in September 2017 for an op-ed article in which he expressed the position of the UN General Assembly; the EU; Council of Europe and the international community regarding Russia’s occupation of Crimea.  Although not imprisoned, he has been prohibited from any public activities (and therefore journalism) for two years, placed on Russia’s notorious ‘List of extremists and terrorists’ and prevented from travelling to Kyiv for vital medical treatment (details here).

Oleg Sentsov has been imprisoned for almost four years and is serving a 20-year sentence.  This is exactly the sentence that the Russian FSB officers torturing him threatened him with in May 2014 if he did not provide the testimony they demanded.  He refused, as did civic activist Oleksandr Kolchenko who was sentenced to 10 years.

Natalya Kaplan recently commented that, while it is important that filmmakers, artists, writers and civic groups have all continued to demand Sentsov and Kolchenko’s release, political pressure is needed to force the Kremlin to free them.  This is one of many reasons why the White House’s refusal to impose sanctions supported by both US House of Representatives and Senate is so unfortunate.

The details below about the trial and imprisonment of Ukrainians who opposed Russia’s invasion of their homeland have been given many times before.  They are repeated here with the urgent request that they be used to call on politicians in your country to intensify pressure on Russia to stop such political persecution of those whose condemnation of Russian occupation is endorsed by all democratic countries.

The sentences imposed on Sentsov, Kolchenko, Ruslan Zeytullaev, Mykola Karpyuk, Stanislav Klykh and many other Ukrainians are far worse than those used to silence ‘dissidents’ in Soviet times.  They are, furthermore, applied against Ukrainians held thousands of kilometres from their families, in most of the cases because Russia wants to silence protest at its occupation of Ukrainian territory.  There is surely no excuse for not imposing the most robust sanctions possible.

Brief details of the ‘Sentsov case’

Four Ukrainian opponents of Russia’s annexation of Crimea  – Oleg Sentsov; Oleksandr Kolchenko; Gennady Afanasyev and Oleksiy Chyrny - were arrested by the FSB in May 2014.

There was literally no evidence of ‘terrorism’ against any of the four men, and there are absolutely compelling serious grounds for believing that all were subjected to torture.  This was asserted by Sentsov from the outset, and stated in court by Gennady Afanasyev when he retracted all testimony against Sentsov and Kolchenko (which the ‘court’ ignored).

Sentsov was warned that if he didn’t give the testimony demanded, he would be called the mastermind and would get 20 years.  As mentioned, the FSB got what they’d threatened although there was literally no evidence against him at all.

Sentsov, Kolchenko and Afanasyev were all declared political prisoners by the renowned Memorial Human Rights Centre, and their release has been demanded by the EU, Parliamentary Assembly of the Council of Europe, OSCE, US State Department and all democratic countries.

More information can be found here:

Sentsov and Kolchenko are just two of many political prisoners, and our silence now will only allow Russia to continue such reprisals against those who dared speak out against its invasion and annexation of Crimea.

I am writing to you as my representative to ask for your assistance in putting pressure on Russia to free Ukrainian filmmaker Oleg Sentsov and civic activist Oleksandr Kolchenko.  There are very strong grounds for believing, as does the renowned Memorial Human Rights Centre, that their arrest and persecution are linked only with their opposition to Russia’s invasion and annexation of Crimea in 2014.  Sentsov was given a 20-year sentence and Kolchenko 10 years, despite the lack of any evidence at all, and now Russia is also trying to claim that the two men ‘automatically’ became Russian citizens.

The men’s release has been demanded by the EU, Council of Europe, OSCE, and all democratic countries, as well as international human rights organizations, yet almost four years on, there is no sign that Russian President Vladimir Putin will release them unless further pressure is brought to bear.

I would stress that in highlighting Oleg Sentsov and Oleksandr Kolchenko, we are in no way forgetting the ever-increasing number of Ukrainians held illegally in Russia and Crimea.  We hope that pressure on Russia to release two innocent men, one of whom (Sentsov) has serious medical issues and two young children whom he was bringing up alone, will be a first step also in ending the mounting repression in Russian-occupied Crimea.

These are only some examples, others can be provided.

Please also write to Oleg Sentsov, Sasha (Oleksandr) Kolchenko and Roman Sushchenko.  Addresses and some guidance on letters in Russian can be found by clicking on the names here.