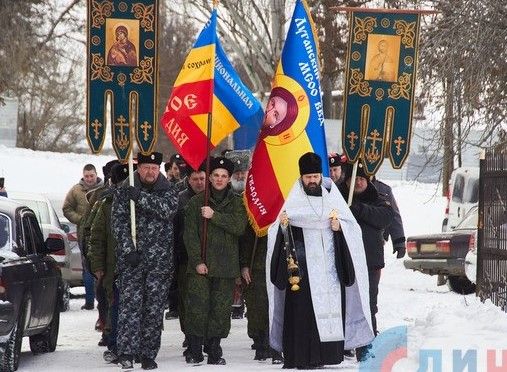 Around 40 ‘Cossack’ fighters from the self-proclaimed ‘Luhansk people’s republic’ [‘LPR’] have attended a ceremony in an Orthodox Church under the Moscow Patriarchate, claiming that it gives them “the right with rifle in hand to defend the republic”. The event on 27 January is not the first time that Moscow Patriarchate churches are seen taking a clear and highly contentious position in the Kremlin-backed conflict in Donbas.

According to , 40 Cossacks, two women and the 10-year-old son of one of the men “swore allegiance to the Orthodox faith, the Republic and the Quiet Don”.  The spokesperson Alexander Shtyka is described as the Luhansk leader of the ‘International  union of Cossack civic organizations of the all-powerful fighters of the Don’.  This Russian-based outfit initiated the formation of the so-called ‘Cossack national guard’  in early 2014, with the latter placed under European Union sanctions in 2015 .  Shtyka asserted that “the oath is binding on each Cossack and gives him the right, with weapon in hand, to defend his fatherland from the enemy.  Now the republic is surrounded by enemies, we all know very well that it is defended by Cossacks, they are standing in faith and truth in defence of the republic”.  The ceremony was followed by a ‘march of the cross’, accompanied by the Orthodox priest, to a memorial to members of ‘LPR’ armed groups.

The fact that these ‘Don Cossacks’ who came to Donbas from Russia to take part in the fighting and any local supporters should come up with such an oath is unsurprising.

The direct involvement of the Orthodox Church under the Moscow Patriarchate [UOP MP] can also not be called surprising, but it is disturbing.

The official position from UOP MP from the beginning was that it took no position on the conflict in Donbas. This was very often not the impression on the ground, with members of the Church seen blessing prominent militants such as former Russian military intelligence officer Igor Girkin and ‘LPR leader’ Igor Plotnitsky. Girkin’s main aide Ihor Druz back in August 2014 that they had carried out extra-judicial executions in Sloviansk.  Sitting under a religious banner, he claimed that this had been to “prevent chaos”.  Those killed during the period of occupation (from April to early July 2014) included four members of an Evangelical Church whose bodies were found in a mass grave, as well as 19-year-old student Yury Prykhodko and Horlivka city councillor Volodymyr Rybak who were both savagely tortured.

Professor Oleksandr Sahan, a specialist on the Orthodox Church in the world and relations between the state and different faiths, the Orthodox Church under the Moscow Patriarchate “a channel actively used for its own purposes by the aggressor state” [i.e. Russia].  “We are talking about a national centre which produces its own national ideology and effectively imposes it on its believers”.

In a 2015 study entitled ‘’,   Ukraine’s Centre for Civil Liberties and International Partnership for Human Rights presented considerable evidence of religious persecution by militants in Donbas, and of  the role played by Russia and its armed criminal ‘crusaders’ in crimes against humanity in the region.

The authors pointed out that “open sources and witness testimony indicate that these armed groups also have local support from the clergy of UOC-MP and the Russian Orthodox Church”.  Examples are provided of some Moscow Patriarchate priests who “have, to varying degrees,  supported these illegal paramilitary groups in their campaign against representatives of Protestant, Evangelical and Catholic Churches, and Orthodox believers who do not recognize the Moscow Patriarchate.”

At least two of the ‘Cyborgs’ defending Donetsk Airport who were taken prisoner by Russian or pro-Russian fighters have said that their tormenters included a man wearing the clothes of an Orthodox priest, who used his cross as a means of torture.

Oleksandr Mashonkin spent 197 days imprisoned by fighters from the so-called ‘Donetsk people’s republic’ [DNR] before being freed on Aug 6, 2015.  During that period he was subjected to all kinds of torture, including a hot iron on his hands.  He   Radio Svoboda that a “priest came, apparently from the Moscow Patriarchate, with a cross. He beat us with that cross around the head, perhaps he thought that would drive out our sins, he said we were monsters.”  When he broke the wooden cross on a prisoner’s head, he brought a metal one, and continued to hit them.

Calls for all sides to lay down weapons, etc. cannot conceal the Moscow Patriarchate’s failure to react when crimes are being committed supposedly in its name.

While conflicts have arisen between differing armed groups, especially in ‘LPR’, the authors note that adherence to the Orthodox Church under the Moscow Patriarch and political ideas around the so-called ‘Russian world’ are largely shared by all pro-Russian militants.

This concept of a supposed ‘Russian World’ – encompassing Ukraine, Belarus and Moldova, as well as Russia itself – has been repeatedly endorsed by Putin, and by Patriarch Kirill. The latter  in November 2009, that “if we consider the Russian Federation with its present boundaries, then we have sinned against the historical truth and artificially cut off millions of people who are aware of their role in the fate of the Russian World and consider its creation their main deed.”

Some of the Cossack ‘Russian world crusaders’ have also taken part in armed conflicts in the post-Soviet areas of Transnistria, Abkhazia and Serbia.