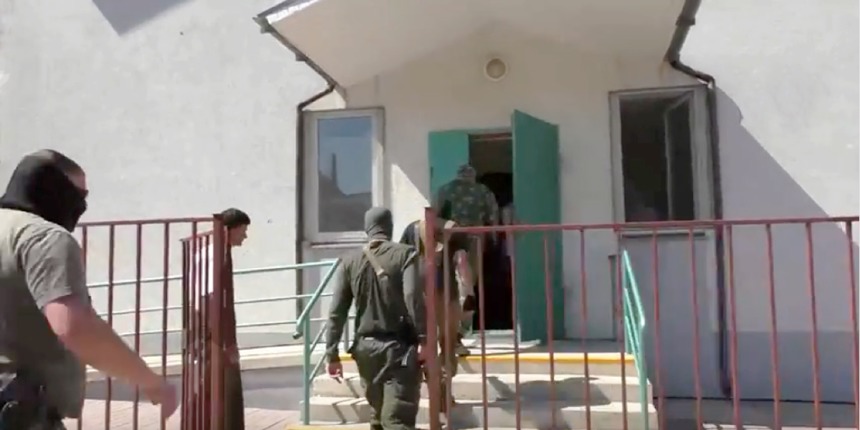 The self-proclaimed ‘Luhansk people’s republic’ [LPR] has yet again followed Russia’s lead, this time by the Jehovah’s Witnesses, calling them and other banned faiths ‘religious groups’.  The move comes just days after the Kremlin-backed ‘LPR parliament’ several ‘laws’, including one aimed at hunting down and prohibiting so-called extremism in religious or political organizations, as well as in the media.

Dmytro Sidorov, who is called the ‘acting LPR minister of culture, sport and youth’ the ban on Monday 5,  He explained that in the so-called ‘law on freedom of conscience and religious organizations’, adopted on February 2, they had specifically excluded ‘religious groups’.  He defined the latter as organizations with five people (presumably meaning at least that number) which “do not have a direct relation to any of the traditional faiths”. Although he suggests that the Jehovah’s Witnesses had been removed earlier, Monday’s announcement is the first formal confirmation of an actual ban on the organization, not its literature.   It comes nine months after Russia reverted to Soviet practice and banned the Jehovah’s Witnesses, claiming the faith to be ‘extremist’.

It took the so-called ‘Donetsk people’s republic’ until 28 July 2017 to Jehovah’s Witnesses’ printed material ‘extremist’. It was claimed that the material aroused enmity on religious grounds and propagandized the superiority of the Jehovah’s Witnesses over other faiths.

In ‘LPR’, they went even further, , on 28 August 2017, that the Jehovah’s Witnesses were helping Ukraine’s Security Service [SBU] and “neo-Nazi groups”.  An investigative search had supposedly established not only that the Jehovah’s Witnesses in Luhansk and Alchevsk were in breach of ‘LPR law’, but that they were probably “agents of influence of the Ukrainian Security Service”.  It was asserted that the search carried out had found agitational material containing Nazi symbols, as well as leaflets calling for cooperation with the SBU.  Leaflets from the SBU and the Azov Civic Corps, it was claimed, had previously been pasted around Alchevsk.

The suggestion that Jehovah’s Witnesses, who avoid any involvement in politics and have faced persecution rather than take up arms, should have “assisted radical, neo-Nazi groups and other military formations” was overtly absurd, and unbacked by any evidence.

According to the same ‘law’, all religious organizations and associations in ‘LPR’ will need to undergo compulsory registration, otherwise their activities will be regarded as illegal.

It is unclear what is required for such compulsory ‘registration’, but the imposition of Russian requirements in occupied Crimea was used to put pressure on and / or drive out a number of religious organizations.  In both Crimea and the militant-controlled areas of Donbas all faiths and denominations except the Orthodox Church under the Moscow Patriarchate have come under major pressure.

The ‘arrest’ of world-renowned religious scholar Ihor Kozlovskyy in January 2016 coincided with propaganda measures against the Ukrainian Greek Catholic Church and other faiths which the militants called ‘sects’.  While that was in ‘DPR’, there is nothing to suggest that the Luhansk militants would follow different policy.

The ‘bill’ on religious organizations was fast-tracked through ‘parliament’ on 2 February, together with similar ‘laws; on ‘, ‘counter-terrorism’;  and one allowing for detention without a court order for up to 30 days..  If the documents, which are as yet not posted,  do happen to clearly define ‘extremist activities’, the official ‘LPR’ website is not letting on.

Whatever ‘extremism’ may be, the bill now establishes “a system of state bodies” aimed at countering it.  Should these ‘state bodies’ consider that political, religious or other organizations are carrying out harmful extremist activities, their activities can be suspended before a court bans them, with the same ‘preventive measures’ allowed  with respect to the mass media.  Dissolution is envisaged, by court order, of legal  entities considered to be providing an ‘extremist organization’ with financial support, venues,  printing or educational facilities and technical back-up.

Some of the measures are directly lifted from the Russian measures seen applied in Crimea since Russia’s invasion.  These include the possibility of formally ‘warning’ the leaders of religious organizations, political parties or the media of “the inadmissibility of doing things which could result in extremist activities”.  In Russia, two such ‘warnings’ can be sufficient to seek an organization’s or media publication’s closure.

All of this coincides with a change to the ‘LPR constitution’ for individuals to be detained for up to 30 days without a court order.  This is purportedly to prevent actions which could threaten the ‘republic’s security, and is allegedly during the unspecified period of ‘martial law’.

At one level, it is difficult to see how the measures introduced differ from what has long been the case.  Most of the people seized and held hostage in the self-proclaimed ‘Luhansk and Donetsk people’s republic’, simply disappeared, with few, if any, normal procedural requirements observed.

The warning now, however, is that any media, religious or political organizations could be summarily closed for what the Russian-controlled militants deem to be ‘extremism’.   ‘LPR’ has already imposed 10, 14 or even 17-year ‘sentences’ for no more than critical comments on a blog or a flash mob against the ‘LPR flag’, and there is no reason to expect that ‘extremism’ charges will be any more justified.

Ihor Kozlovskyy, who was released in the exchange on 27 December 2017, after almost two years’ imprisonment, the situation for religious organizations in occupied Donbas “catastrophic”.  He says that the militants are imitating Russia with respect to religious matters, and that anti-Semitism and Islamophobic sentiments are rampant, and expressed also by the leaders of the so-called ‘republics’.