Man arrested over attacks on Nigerian studentsTwo vicious attacks on Nigerian studentsNigerian held in detention for 6 months after being attackedTwo suspects in Luhansk racist attack caught in RussiaAlleged organizer of Luhansk attack on foreign students released from custodyLuhansk: Continuing run-ins between local residents and foreign nationalsLuhansk: Masked gang beat up foreign studentsAnti-Semitism and xenophobia in Ukraine during April 201424. Rights of ImmigrantsOlaolu Femi: Suspended sentence for defending himselfOlaolu Femi’s surreal difficulties continueOlaolu Femi finally released from custody17 months on Olaolu Femi trial delayed for want of an interpreterProsecutor accused of corruption over Olaolu Femi casePeaceful protest in support of imprisoned Nigerian student stoppedQuestionable “witness” in the Olaola Femi trialThe Olaola Femi Case: Free Hand to Skinheads?One year on, still imprisoned for defending himselfSelf-Defence is No Offence!It’s criminals who should be in prison, not their victims!
• Topics / Interethnic relations 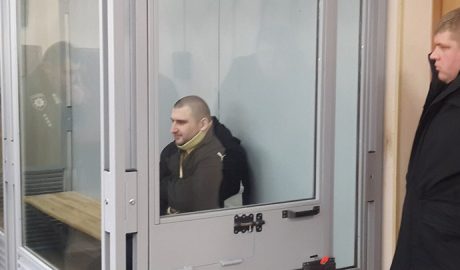 A 28-year-old Kharkiv man has been sentenced to life imprisonment for racist and homophobic attacks on six people and the killing of another young man. The case was important in that the prosecution clearly identified the racism determining Vitaly Kadnichansky’s choice of victim, as well as referring to homophobic motives.  It also gained some notoriety due to the attempt by Oleh Lyashko, head of the ‘Radical Party’ to get the young man added to a list of ‘political prisoners’ in 2015, and released under an amnesty.

Vitaly Kadnichansky was arrested in May 2012 after two shocking attacks on Nigerian students studying in Kharkiv, with other charges then added. He reportedly confessed to the attacks, though later retracted his confession and denies all charges.

A panel of judges at the Dzherzhynsky District Court in Kharkiv, under presiding judge Yekateryna Arkatova, was unconvinced by his later rejection of the charges, and sentenced him on February 5 to life imprisonment on charges of murder, attempted murder and possession of explosives.  He was also ordered to pay 6 thousand UAH to each of the victims, as well as 18 thousand for costs linked with the investigative experiments. The sentence is, of course, not final and his lawyer has said that she will be lodging an appeal.  appealed.

Kadnichansky was charged with six attacks, mainly on foreign nationals (from Africa or Asia), as well as with the murder of one Ukrainian Vyacheslav Sychov.  He had apparently confessed to this separately.

He is supposed to have come to Kharkiv from his village in the Kharkiv oblast and selected his victims, choosing people not only on the basis of race, but so that they were physically weaker than him.  He attacked all of them, by knifing them in the back, and inflicting up to 18 stabs).  One of his victims was a minor who managed to flee after receiving 5 stab wounds.  Vyacheslav Likhachev, who was monitoring all such attacks at the time, understands that the young lad, a schoolboy, was of ‘non-Slavonic’ appearance.

A number of people were released in an amnesty in 2014 after the abrupt end of Viktor Yanukovych’s presidency.  Some, but not all, were very clearly political prisoners, or people whose imprisonment and convictions under Yanukovych had aroused concern.  The suggestion in 2015 that Kadnichansky should be released as a ‘political prisoner’ was, fortunately rejected, with some of the others proposed by Lyashko also eyebrow-raising.

Kadnichansky was found guilty of grave crimes, but the motives were never in dispute.  It has often been difficult to get prosecutions initiated on the grounds of xenophobia, and little experience at all of charges of homophobic crimes.   The reasons include the difficulty of proving the intent required by Article 161 of the Criminal Code and a wish to not ‘spoil’ the statistics with such cases.  One very negative consequence is that many foreign nationals targeted in racist attacks have either been fearful of reporting them to the police, or have simply seen no point.