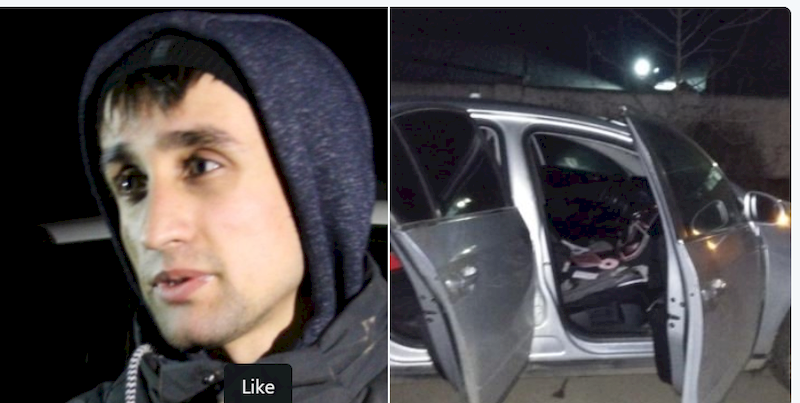 23-year-old Fakhri Muratov was dragged from his car in Russian-occupied Dzhankoi [Crimea] on February 6 by men in masks and without any insignia, who proceeded to beat him and then search his car, before driving off.  It is not clear whether the aim was ‘simply’ to terrorize, or whether the young man was targeted because of his father, Remzi Muratov, who is a member of the Crimean Tatar Qurultay [National Congress.  The latter reportedly faced a search of his home, on supposed suspicion of ‘terrorist activity, in 2015, and another visitation the following year.

What is clear about the events on Tuesday evening is that the local police assumed that the assailants were enforcement officers.

Muratov told Krym.Realii that the men had silently pulled him from the car, hitting him in the stomach and on the legs.  There were four men, three in balaclavas, and none had anything on their clothes to indicate what unit they were from.

Since they lifted up the carpets in his car, it is possible, as the local police suggested, that he was mistaken for somebody as part of an operation ‘to catch drug dealers’.

Crimean Tatars have faced too many abductions, disappearances, beatings, and armed searches under Russian occupation to exclude the possibility that this was the latest act of terrorization.

This is the view of Rustem Ennanov, an activist from the Crimean Tatar national movement, who recalls that the abduction of Ervin Ibragimov began in a similar way, with men dragging him from his car and then taking him away.

Ervin Ibragimov, a member of the Executive Committee of the World Congress of Crimean Tatars and, until Russia’s invasion, a Bakhchysarai City Councillor, has not been seen since his car was stopped as he returned to his home in Bakhchysarai in the evening of May 24, 2016.

CCTV footage was obtained from a shop near his abandoned car,  This shows Ibragimov being stopped by men who appear to be in road patrol uniform.  There is a second where the young man tries to flee, but is seized and forced into the men’s van.

Ervin’s father Umer Ibragimov sees no progress at all, and says that the only action from the FSB was to set up surveillance of him and his wife.

Just over a year before Ervin Ibragimov was abducted, there was an apparent attempt to seize another rights activist Emir-Usein Kuku.  It went wrong for the abductors because a crowd gathered and demanded to know what was going on, and turned in sinister fashion into an FSB ‘search’. 10 months later Kuku was arrested and is now facing a long sentence on entirely fabricated charges.

Some of the abductions appear to be aimed at forcing Crimean Tatars to collaborate with the Russian FSB, sometimes after having been tortured into ‘confessing’ to non-existent crimes.

Renat Paralamov, a 31-year-old father of three, was effectively abducted on September 13, 2017, after men in masks turned up at the home he was sharing with his wife, four children, and his parents-in-law.  Although not an activist as such, he had collected money for the Crimean Marathon which is seeking, through united efforts, to pay the ever-increasing number of fines which the regime is using to try to crush opposition.

It was noticeable that the two men who had FSB insignia quickly tried to conceal it after a large number of neighbours and friends gathered.

Paralamov  was taken, with a bag over his head and in handcuffs, to a building, where most of the torture took place.

It is unfortunately likely that Paralamov  is not the only Ukrainian in occupied Crimea to have faced such treatment, however he refused to remain silent.

After being found at the bus terminal where the FSB had left him in terrible condition, he spoke at a press conference with prominent rights lawyer Emil Kurbedinov.  Over the following weeks, he quietly moved himself and his family to mainland Ukraine, from where he gave the full harrowing details of his experiences.   In an emotional address, he explained: “If I don’t speak out, they’ll come for others”