13-year sentence against Belarusian investigative journalist who helped expose crimes against Ukraine Fascism is here in Russia. Anti-war activities in Russia, 15-22 AugustOpposing the Orwellian State. Anti-war activities in Russia, 27 July-5 AugustInvaders stage fake referendum so they can accuse Ukraine of ‘invading Russia’ Chief Kremlin propagandist calls Russia’s killing of elderly civilians – Hero of Ukraine Oleksiy Vadatursky and his wife - "denazification in action"Russia confirms plans to annex occupied parts of Zaporizhzhia and Kherson oblastsFeminists, “Railroad Partisans” and School-Leavers Protest. A Digest of Protests in Russia, 25 June-2 July 2022 Belarusian rail partisans who helped save Kyiv from the Russian invaders threatened with death sentences “We’re not celebrating today” – digest of Russian protests (early June 2022)The letter on the attempt to remove the Ombudsman from the position – to all people concernedEven in Russia, Putin’s ‘denazification’ claims prove no excuse for war against UkraineRussian invaders create “real concentration camp” to torture Ukrainian prisoners in Kharkiv oblast Russia is forcibly ‘mobilizing’ Ukrainians from occupied territory to fight its war against Ukraine Fake ‘referendums’ at gunpoint planned to try to ‘legitimize’ Russia"s invasion of Ukraine Chief Rabbi of Odesa: “Ukraine is the safest country in the world for Jews” Russia has already greatly surpassed the Nazi Third Reich by insidiously launching missile and bomb attacks on UkrainePutin ramps up aggression against Ukraine through so-called ‘Russian citizens’ in occupied Donbas Putin’s new law envisages annexing other countries" territory as grounds for Russian citizenshipNew United Russia party MP confirms that the fighting in Donbas is by “Russian forces”’ Russia blocks OSCE conference when prevented from spreading disinformation about occupied Crimea and Donbas
• Topics / Elections

Why Election Reform Should Be a Top Priority Now 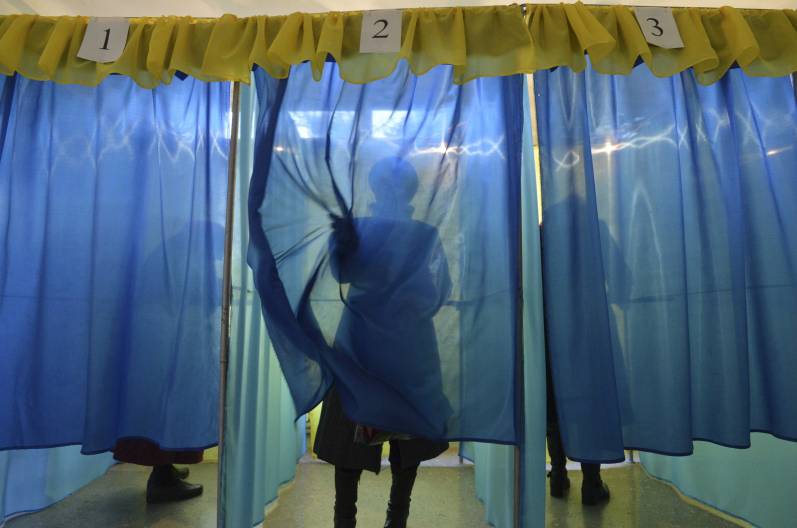 People gather inside voting booths during a regional election at a polling station near Kramatorsk, Donetsk region, Ukraine, October 25, 2015. Ukrainians go to the polls on Sunday to appoint mayors and council heads to regional seats. REUTERS/Oleksandr Klymenko

Election reform in Ukraine is finally gaining some momentum. In December, parliament passed in the first reading draft law #3112-1, which creates an open list proportional election system and makes it easier for small parties to win seats in parliament. In addition, the president’s long-awaited list of candidates for the Central Election Commission has finally been submitted.

This is a good start to improve Ukraine’s electoral system—but it is only a start. Since the Venice Commission recommends having an agreed-upon election code in place at least a year before an election, and with the presidential election just fourteen months away (and parliamentary elections shortly thereafter), there is no time to waste. The issue needs serious engagement from the president, parliament, civil society, and diplomatic community now.

However, the law needs public debate and more involvement from civil society in order to work out some of the trickier points. For example, its most controversial provision distributes seats at the oblast level based on turnout. This would give additional weight to votes from politically active regions at the expense of those with low turnout. Unfortunately, this could have the effect of decreasing incentives for turnout in these regions in the future. The amendments proposed to the draft law by MP Leonid Yemets include the elimination of this turnout distribution language, which is a good thing.

Nonetheless, this is the first proposal in Ukraine for an open list proportional system that includes regional representation by oblast—and that’s important, given that a strength of the current system is that half of the MPs are elected from districts in each oblast. Regional representation is especially important for smaller oblasts.

The most urgent issue is the renewal of members’ terms to the Central Election Commission (CEC). Of fifteen members, the terms of thirteen have expired; a commission with only two valid members can hardly claim legitimacy. On January 23, President Petro Poroshenko presented a list of fourteen proposed members, and in February, parliament is supposed to select thirteen for final approval.

However, the proposed list lacks representation from the Opposition Bloc, the third largest faction in parliament and main opposition party. In the past, the CEC has had representatives from opposition parties, and this is standard practice in the West. The inclusion of pro-Russian Opposition Bloc representatives on the CEC is important to increase the commission’s legitimacy since it represents the entire country, even though this step will justifiably rankle many Ukrainians. Indeed, the G7 ambassadors have called for “a politically balanced election commission,” and they are right to do so. There is a fix: the Yemets amendments clarify provisions for CEC appointments and institute term limits; they also require the president to include all parliamentary factions in the list of proposed CEC members.

Campaign finance is another reform that is just as important, if not as urgent. Ukrainian elections are tremendously expensive and are frequently fueled by corruption. According to the Westminster Foundation for Democracy, a Ukrainian political party with a sizable faction in the Rada can spend up to $500 million on a single election cycle, with most of that money being spent illegally and non-transparently. In comparison, if that Ukrainian political party’s campaign spending was put in US equivalents based on population size, its spending would amount to around $4 billion—more than twice what the US Republican Party, Republican candidates, and all pro-Republican PACs spent during the 2014 cycle. In a country whose GDP is about 1/200th that of the United States—and one where there are more than two major parties—this serves as a serious indicator of the level of corruption within the current system. Fortunately, amendments to the draft law harmonize provisions of the election code with the 2015 Political Finance Reform Law, which adds transparency and greater accountability to the process.

Another issue to be resolved is the question of what to do with Ukraine’s 1.6 million internally displaced persons (IDPs), who are often unable to vote because Ukraine still uses an antiquated Soviet system for registering residences that effectively bars many from voting in the areas to which they have moved. The Yemets amendments would allow IDPs to vote where they currently live.

Even if every single one of the reforms mentioned here is implemented, that would not be enough. This is not only because Ukraine is still a young democracy, but also because the opponents of a democratic Ukraine are intelligent. The criminals and oligarchs who have made careers out of manipulating Ukrainian politics will not sit idly by: they will invent new ways to cheat the system.

Nevertheless, it is the duty of the president, parliament, and civil society to pass an improved electoral code this spring, before the campaign season begins, to ensure that the 2019 elections meet international standards and level the playing field for everyone.

Andrew Fink is an PhD candidate at the University of Leiden who has been living in Ukraine since 2015.