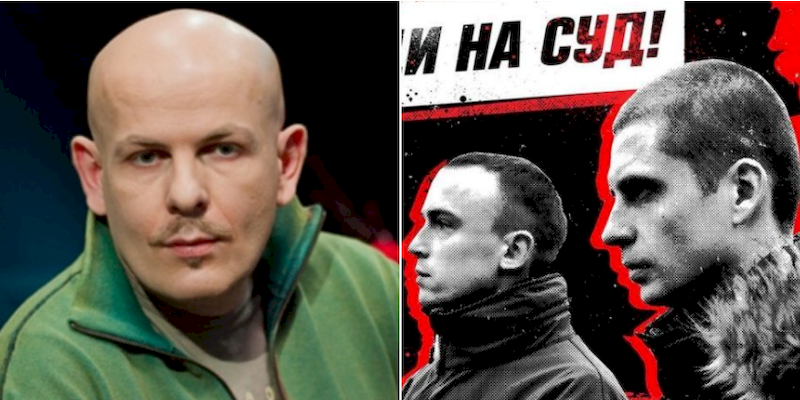 Almost three years after Ukrainian journalist Oles Buzyna was shot dead near his home in Kyiv, two men have gone on trial, charged with his murder.  If Buzyna was a highly controversial figure, so too is ‘C 14’, the far-right organization that the suspects – Andriy Medvedko and Denis Polishchuk – are linked with.

A number of members of C14 were outside the court for the preliminary hearing on February 9, together with several members of the so-called ‘Natsionalni druzhyny’ vigilantes whose public oath-taking ceremony at the end of January aroused considerable public concern.  The position taken by C14 and other nationalist groups has been that the men are innocent, and are being targeted as ‘patriots’.

Oles Buzyna was shot dead in the early afternoon on April 16, 2015, less than 12 hours after the killing of Oleh Kalashnikov, a rather notorious politician linked with the regime of former President Viktor Yanukovych.  Although the two deaths were initially assumed to be linked, and a group calling itself the Ukrainian Insurgent Army [UPA] claimed responsibility for those killings and other deaths, Ukraine’s SBU [Security Service] dismissed the alleged group’s statement.

Buzyna was known for pronounced pro-Russian views and extremely contentious works, such as a book about the Ukrainian poet Taras Shevchenko.  He had also recently ended a brief spell as Chief Editor of the newspaper Segodnya.  The 45-year-old journalist was at least as visible, if not more, in Russia because of the frequent interviews he gave, generally echoing the position pushed by Moscow about events in Ukraine.

Whether or not significant, journalists in Ukraine did note that Russian President Vladimir Putin had commented on Buzyna’s murder during a live broadcast while the Ukrainian media were still awaiting confirmation before publishing the news. Other journalists initially assumed the Russian security service to be behind the killing.

On June 18, two months after Buzyna’s killing, the Interior Minister Arsen Avakov publicly asserted that the case had been solved, and that three men were in custody.  The third was shortly released, and only Medvedko and Polishchuk were named.

Then 26, Medvedko was a member of C14, an ultra-nationalist organization, which is generally considered to be neo-Nazi.  Polishchuk, who was 25, was at the time identified as a member of UNA-UNSO, a far-right nationalist organization which during Euromaidan had merged with Right Sector, but later re-emerged as a separate organization. He too seems to be involved in C14. Medvedko had recently fought in Donbas as part of the Interior Ministry’s Kyiv-2 volunteer battalion, while Polishchuk had served as commander of a unit of the 54th separate reconnaissance platoon.

Both men deny any involvement in the killing.  While in detention, court hearings seeking their release were attended by certain MPs and others who also maintained that the men were innocent.  While most were people who shared the men’s political views, that does not appear to have been the case with all.

Medvedko was initially remanded in custody without the possibility of bail, while Polishchuk’s bail was set at five million UAH.  The bail was paid, however the prosecutor challenged his release, and initially succeeded in getting him back in SIZO [pre-trial detention centre].

It is not quite clear what changed, since in December 2015 both men were released under house arrest.  This was soon changed to a night curfew, and, since there are strict time limits on house arrest, later removed altogether.  At present, both defendants are only under a signed undertaking not to abscond.

As reported earlier, the high profile nature of the killing and international attention to the case prompted claims from those asserting the men’s innocence that they had been framed.

Artem Shevchenko, Police Communications Officer, reacted to this just over a month after the arrests by taking the unusual step of getting an article published about the case.  He asserted that he had persuaded the investigators to share evidence which could not harm the case, but should convince people that the police had grounds for their suspicions.

He wrote of several witnesses, although only one appeared to have seen the men, while the others confirmed seeing the car believed to have been used.  The investigators assert that Buzyna’s killers were watching him from that car for a week, and early that morning arrived in the courtyard and waited for him, then left in it after the killing.

The article was detailed, with other evidence mentioned, including some regarding phone calls which had allegedly drawn the investigators’ attention to Medvedko.

The men’s lawyer disputed the DNA forensic tests, and also produced the testimony of two women working nearby who said that the defendants were not similar to the men in the car whom one of the women had even sold coffee to.

A second DNA test was taken a year later, with this against the two men’s will, and with their lawyer publicly asserting that the men had been physically ill-treated in the process.

The pre-trial investigation was concluded in June 2017.  That was already two years after the men’s arrest, and seven months before the preliminary hearing into the case in the Shevchenkivsky District Court in Kyiv.  There had earlier been an attempt by that court to get the trial moved elsewhere, but this was turned down . The reason given was that it would be difficult to find the number of judges using the automated selection procession.  It does seem likely, however, that enthusiasm about taking on this controversial case would be strictly limited.  The trial will be with a panel of judges: presiding judge Yevhen Sidorov; Tetyana Levytska and Oleh Linnyk (the judge who recently gave a suspended sentence to one of the men involved in the killing of Maidan journalist Vyacheslav Veremiy).  The defence demanded the withdrawal of the presiding judge, and also assert that the men should be tried by a jury. Sidorov appears to have himself tried to withdraw, however after retiring to the consultation chamber, all moves to change the panel were rejected, and the first hearing into the actual charges will be on February 28.

According to the BBC’s Ukrainian Service, it is not only the defendants who are represented by a well-known lawyer Andriy Fedur.  The lawyers representing Buzyna’s wife and mother are Artem Zakharov and the former Deputy Prosecutor General under Yanukovych, Renat Kuzmin.  The latter played an extremely prominent part in the politically motivated prosecutions of opposition leader Yulia Tymoshenko and others. They assert that the investigators have violated the rights of Buzyna’s family, through mistakes and failings which reduce the chance of solving the crime and getting a conviction.

Medvedko and Polishchuk are charged with murder, committed by a group in conspiracy and with illegal possession of arms.  If convicted they face 10-15 years’ imprisonment, or even life.