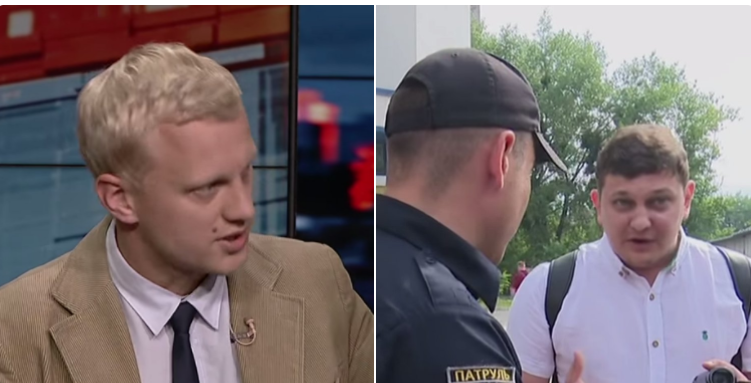 Prosecutor General Yury Lutsenko has acknowledged that blogger Vsevolod Filimonenko is a ‘provocateur’, yet rejects any suggestion that the prosecution of Vitaliy Shabunin over an incident involving Filimonenko constitutes persecution of Shabunin, a well-known anti-corruption activist.  His view was not shared from the outset by many civic and media organizations in Ukraine and western observers, and the first court hearing on February 9 only heightened deep scepticism over this prosecution.

As reported, the incident in question is not in dispute. On June 8, 2017, Shabunin did indeed punch Filimonenko.  Numerous questions come to mind over this case, including why that particular incident prompted a criminal investigation when many other much more serious attacks receive little attention.  Even more disturbing is why the prosecutor should have chosen to support Filimonenko’s claim that Shabunin hit him “because of a journalist investigation into the activities of the Anti-Corruption Centre [AntAC] and Shabunin”, the Centre’s founder.  The corresponding change in the charge to the more serious “deliberate inflicting of light or moderate injuries to a journalist in the course of the latter’s carrying out of his work”, means that Shabunin could face a sentence of up to 5 years’ imprisonment.

Lutsenko’s answers to questions about the case in an interview for TSN avoided or distorted certain issues which are crucial, in particular:

Filimonenko’s right to be considered a journalist;

the grounds for considering that the punch was because of such journalist activities; the real nature of any injury inflicted.

During the interview, Lutsenko floundered badly trying to explain what the publication was that gave Filimonenko the right to get such accreditation and to be considered a journalist.  He said that he had at first been “against viewing Filimonenko as a journalist but that the documents provided had led the investigator to the conclusion that it was, nonetheless, necessary to apply this article”.

He then went on, with rather manipulative pathos, to explain that he could not “shut his eyes” to physical violence.

It should be noted that various parts of the prosecutor’s service have persistently closed their eyes to real attacks by those in the public service on journalists.

Lutsenko’s answer was at very least disingenuous.  In a case where Ukraine’s most prominent media and civic organizations have stated clearly that there are no grounds for treating this as an attack on a journalist carrying out his work, it should not be up to the defence to have to ‘prove’ that Filimonenko is not a journalist.  This is particularly true where the video footage of the incident appears to give no grounds for seeing the impugned motive of obstructing a journalist.

The background to the incident, as well as concerns about earlier treatment of AntAC were described earlier.  The crucial moments for assessing the charges can be seen and heard on the video here .  Filimonenko has run up to Shabunin saying something about the latter’s accusation that he had upset his colleague Oleksandra Ustinova.  Shabunin asserts that he was outraged at Filimonenko’s behaviour towards his young colleague whose friend was killed in the fighting in Donbas.  She had been hounded, he says, by Filimonenko at the airport, with the latter asking her how she could be going on holiday when men were dying.

After Shabunin left the recruitment office, he was surrounded by journalists, and by Filimonenko.  Shabunin tried to go up to him, accusing him of hounding his colleague.   Filimonenko kept running away, and then suddenly used a pepper spray straight in Shabunin’s face.

In court, the defence applied for all medical documents to be provided since most had not been included in the material.  While the punch is not in question, its force and effect is.   The prosecutor asserted that the forensic assessment had been added, and said that they would waste a lot of time having to present the documents again.

Shabunin was unsympathetic: “Five years in prison – now that is a long time.  Undoing folders and getting documents out does not take long”.

The Prosecutor General’s assertion that the “documents” called for the charge of ‘obstruction of a journalist’ was made on the eve of the first hearing on the so-called merits of the case.  Given this line of argument, the answers provided during that hearing by Dmytro Mahanov, founder and chief editor of the website Flash on Time News, are particularly worthy of note.  It was he who had obtained journalist ID for Filimonenko, he confirmed, saying that Filimonenko had been carrying out an editorial task, through “an investigation of AntAC and Shabunin”.

This he allegedly did for no money at all.

In fact, what he did also proved to be in question.  Asked how many pieces of investigative journalism he had published in the newspaper he allegedly worked for without remuneration, the answer was none.

Mahanov was also unable to name even one other well-known journalist who worked for the newspaper.  Challenged to name any, he gave a few names, and asserted that the latter had posted “many” articles on his resource.

Why was Filimonenko’s work not in the newspaper or on the site?  This, Mahanov said, was his “personal decision”, since he can post what he wants.  And get journalist accreditation for whom he wants, with this then used as justification for a worryingly questionable prosecution.