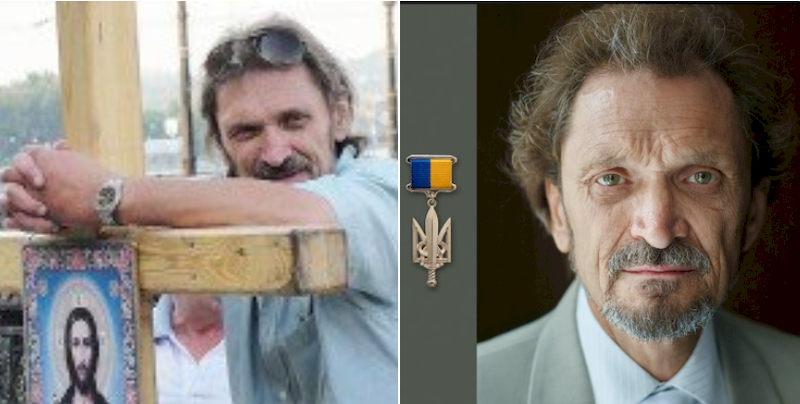 Oleksandr Khomchenko,  the courageous Donetsk pastor tortured for his active participation in the Prayer Marathon under a Ukrainian flag in 2014, has died after a long illness, aged 59.  He had been living in Mariyinka, Donetsk oblast, where he was Pastor of the Church of the Transformation and very active in voluntary work, helping families in need.  He had also travelled to the European Parliament as part of a mission aimed at highlighting Russian war crimes in Donbas, and was one of the people who gave testimony used in the report “Those who survived Hell’.

Back in February 2014, Father Oleksandr was one of the organizers of the Prayer Marathon. Together with members of all faiths, except the Orthodox Church under the Moscow Patriarchate, they gathered on Constitution Square in the centre of Donetsk to pray for Ukraine’s unity and for peace. The Prayer Marathon continued for 158 days, although it became more and more dangerous with each day.  Pastor Sergey Kosyak has stressed that the main danger was in the fact that they gathered under the flag of Ukraine.  They had even been approached and told to  take away the flag and they could pray as much as they wanted to.  They refused “since for us it was more than a flag”, he explains.

“We are here, - Father Sergey explained on one occasion – to defend the honour of this flag.  Various types of evil have been committed at times under it, but today we are rehabilitating its symbol, praying under it for peace, for love, for the people living in our country”.

16 participants ended up taken captive, with 5 of them subjected to mock executions. One person was killed.  Ihor Kozlovskyy, a religious scholar who had remained in Donetsk because of his severely disabled son, was only released on December 27, after almost two years held captive.  Although he was seized long after the worshippers had been forced to stop gathering each day, his ‘arrest’ coincided with an attack on the Ukrainian Greek-Catholic Church and what the Russian-controlled militants called ‘sects’.

Father Oleksandr was Pastor at the ‘Word of Life’ Church in Donetsk, and many of his parishioners were also taking part in the Prayer Marathon.  In an interview given in 2016, he explained that at the beginning there had been as many as 300 worshippers, however the prayer tent had been attacked four times and people were understandably afraid.  A number of priests and pastors had been abducted during those months, and you could get killed just for wearing a ribbon in the colours of the Ukrainian flag on your clothes.

This was no exaggeration.  On July 23, 2014, 16-year-old Stepan Chubenko was seized by militants under the control of Vadim Pogodin (‘Kerch’) because of the Ukrainian ribbons on his rucksack and a scarf from the Karpaty Football Club which he supported. He was tortured and then shot and killed.  Russia has refused to hand over Pogodin who is now living in Russian-occupied Crimea.

Father Oleksandr, together with Sergey Kosyak and others, spent their days helping to evacuate families with small children, or where somebody was unwell.

He was seized by the militants on August 4, 2014, together with two other people.  It was reported at the time that Valery Yakubenko had been accused of not working for the good of the so-called ‘Donetsk people’s republic’ [‘DPR’] and of supporting ‘enemy sects’, but was released after 24 hours.  Father Oleksandr, as Pastor of a Protestant Church, was regarded as an enemy, held and tortured for several days.

He later explained what had happened. On that day, he had taken flowers and chocolates for two of his parishioners who had birthdays that day.  “You understand, at that time in Donetsk I lived each day as that it was my last, and rejoiced in anything good that was happening. We prayed, while tanks and armoured vehicles drove past us …”

Father Oleksandr was held and tortured for nine days.  He explained later that the bandit who had tortured him had told him he had come from Belgorod [in Russia] “to fight fascism.  Yet again I was bemused: a person nicknamed ‘Bes’ [demon’] is fighting for Orthodoxy, while some ‘Abwehr/ is fighting fascism.  It’s all got mixed up for them.”

He recounted that they had staged fake firing squads three times in the four days he had been held prisoner.  The first time, they put him against a wall and then fired from machine guns over his head.  He thought they would kill him.  “During the first day of my captivity, I saw and heard how they killed Ukrainians.  They shot one from a machine gun, with another they tried out a grenade thrower.  One person was forced onto his knees and shot dead with a pistol.  “

Among those mourning the passing of Oleksandr Khomchenko is Said Ismagilov, Head of the Spiritual Directorate of Muslims of Ukraine.  He recalls that he owes his life to Father Oleksandr, who came to him as soon as he was released and told him to go into hiding immediately, as he would be next.  It was thanks to this warning, that the militants did not find him when they arrived at the Mosque.  “He was a person with a great heart, much love, a great patriot”.

Oleksandr Khomchenko was named People’s Hero of Ukraine in the summer of 2016.