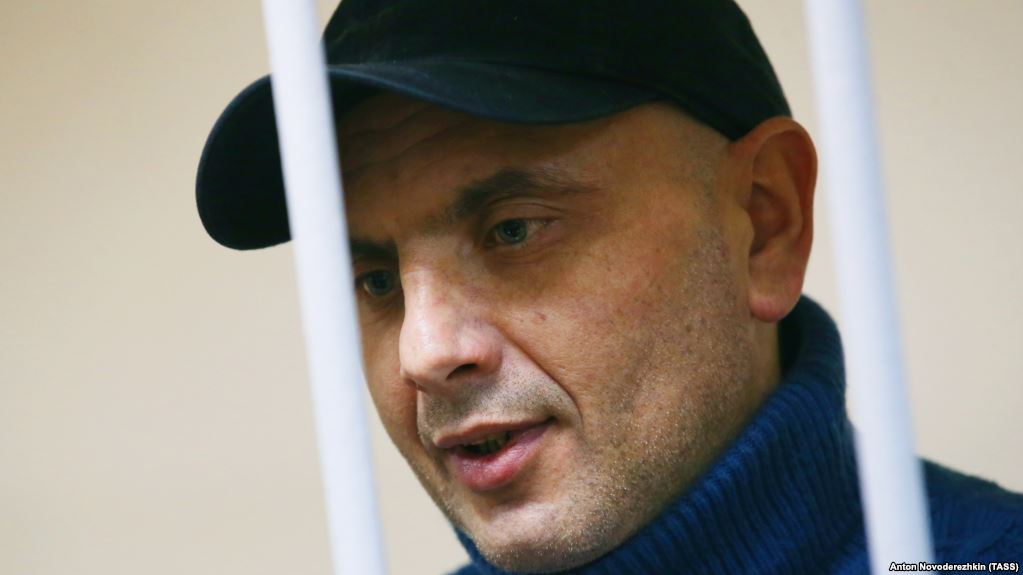 A ‘court’ in Russian-occupied Crimea has sentenced Andriy Zakhtei to six and a half years’ imprisonment after he was effectively tricked into ‘cooperating’ with the investigators.  Having initially brutally tortured Zakhtei and three other Ukrainians for ‘confessions’ to a fictitious ‘sabotage plot’, Russia’s FSB then used the appalling conditions of imprisonment and psychological pressure to convince Zakhtei to accept the charges and be ‘tried’ behind closed doors.   This, it turns out, was a win-win situation for the FSB, and Oksana Zakhtei is surely right in saying that her husband was simply used.

The ‘High Court’ reduced the sentence in a harsh regime prison colony demanded by the ‘prosecutor’ by 6 months.  Zakhtei was also fined 220 thousand roubles (a very large amount for the family).  The charges were of planning sabotage; obtaining firearms and explosives; and, most cynically, of having illegally obtained a Russian passport.  The latter charge was introduced after Zakhtei renounced his Russian citizenship back in March 2017,  saying that he was disillusioned by the Russian justice system and lack of rule of law, seen in how they had falsified his case.

We can only guess the ferocious pressure that Zakhtei was under, but it is very unfortunate that the FSB were able to get their way with a secret trial, and no argument.

There was, after all, no evidence of a ‘sabotage plot’ at all, and no traces of Zakhtei’s DNA or fingerprints were found in the supposed hiding place with weapons and explosives.

It is also significant that of the four Ukrainians who were shown on Russian state-controlled media ‘confessing’ to a sabotage plot organized by the Ukrainian military, the first two men were both sentenced on charges quite different from the ‘confessed version’.

The first video shown widely on Russian television was of Panov’s ‘confession’ and the accusations against him.  The video was extremely sloppy, with the full moon visible in one shot indicating that it had been taken three weeks earlier when Panov was still working as a driver in Enerhodar [Zaporizhya oblast].  Panov showed signs of having been beaten.

Andriy Zakhtei, a taxi driver living in Yevpatoria, also ‘confessed’  to having directly fulfilled tasks from Ukrainian military intelligence in transporting saboteurs and their things around Crimea.  In fact, he had received an order to pick up some people and had been in constant contact with his wife.  This was presumably part of a set-up, since the supposed clients did not appear, and he was grabbed by the FSB.

On August 12, Redvan Suleymanov also stated on a video broadcast on Russian TV that he had been recruited by Ukrainian military intelligence in October 2015.  He was later jailed for 20 months on effectively different charges.

On August 22, 2016, in a report on Russian TV claiming that the so-called ‘sabotage in Crimea’ had been planned at a very high level, the confession was broadcast of Volodymyr Prysich, a truck driver from Kharkiv. He was sentenced on May 18, 2017 to 3 years’ imprisonment a totally different charge.  He denied all charges, and said that the first confession had been tortured out of him.

The sentence passed on Zakhtei is thus twice as harsh as the more severe of the other sentences.  This may be revenge for Zakhtei’s earlier retraction of his ‘confession’ and the details he has provided, including in an application to the European Court of Human Rights, about the torture he was subjected to.  The FSB may also need such a sentence for their paperwork especially since Panov has thus far withheld intense pressure to get him to also ‘cooperate’.

Both Panov and Zakhtei were long prevented from seeing lawyers, with this effectively only achieved after the European Court of Human Rights’ intervention on Panov’s behalf.  This was a full two months after the men’s seizure, and Panov had only a very short amount of time with his lawyer.

It was, however, long enough to retract his confession and say it had been obtained through torture.  Russia immediately moved Panov and Zakhtei to Moscow, presumably hoping to get him far away from his lawyer.  This, in fact, made it harder to prevent the men seeing lawyers and giving detailed accounts of their torture, which included electric shocks to their genitals.  They were soon moved back to Crimea, where they were held in very bad conditions and placed under ongoing pressure to renounce their lawyers and ‘cooperate’.

Zakhtei is 42, and originally from the Lviv oblast.  He had earlier had trouble with the law, but now has a wife and young daughter and the family had moved to Crimea, hoping to begin a new life.