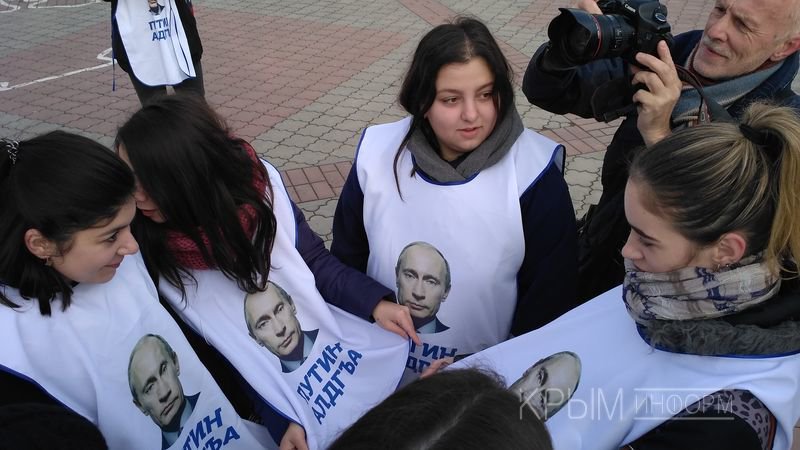 Russia cannot even fake a Crimean Tatar ‘rally in support of Russian President Vladimir Putin without getting it wrong.  Not only was the event very obviously orchestrated for the cameras, but they hadn’t even bothered to get the language right.  According to Refat Chubarov, head of the Mejlis of the Crimean Tatar people, the words which were supposed to mean ‘Putin forward!’ in Crimean Tatar were, in fact, in the Tatar language.  Chubarov suggests that the FSB, whom he believes to be behind the stunt, couldn’t care less where Tatar ends and Crimean Tatar begins.  “For them all non-Russians are the same”.

The event was, of course, for Russian-controlled media and they were, predictably, quite uncritical.  The Russian state-owned RIA Novosti had the headline: “Putin forward!” Crimean youth pass on a message to the President’   This message in which the young people were supposed to form the words “in Crimean Tatar” was then said to be supported by “Crimean Tatar civic activists”.  As a physical embodiment of the latter, the reports all cite “the head of a regional organization of Crimean Tatars Eivaz Umerov”.  He claims that the flash-mob was spontaneous, and is quoted as saying: “it is no secret that Crimea is now on the eve of the celebration of the Crimean spring.  Crimea has been within the makeup of the Russian Federation for four years, and all that is thanks to President Vladimir Putin”.

The ‘flash-mob’ is asserted to have been part of an action entitled ‘Crimean spring. Building the future”.

It should be noted that well-known Crimean Tatars and other Crimean Ukrainians forced into exile after Russia’s invasion are calling on western countries to not recognize the already-known outcome of the Russian presidential elections, which are being illegally held in Crimea.  It is no accident that the date chosen was March 18, the anniversary of the ceremony formalizing Russia’s illegal Crimea land-grab.

Russia is currently facing legal proceedings at the International Court of Justice at the Hague, with one of the legal suits brought by Ukraine being over violation of the International Convention on the Elimination of All Forms of Racial Discrimination through its treatment of Crimean Tatars and ethnic Ukrainians in occupied Crimea.  It is currently refusing to comply with the provisional measures which the ICJ agreed to impose.  Instead, repressive measures have intensified, while certain Crimean Tatars who chose to collaborate with the Russian occupiers organize propaganda stunts like that on February 17.

A month before the hearings at the Court in the Hague, Russia’s representative to the UN produced a statement, purportedly from the Qırım Birligi organization, headed by Remzi Ilyasov, calling for recognition of Crimea as Russian, an end to sanctions and to the blockade of Crimea which Russia invaded and annexed in early 2014.  That letter from a few collaborating Crimean Tatars came just days after the announcement that a newspaper in the Ukrainian language was to be published in occupied Crimea.  In that case also, the supposed ‘Ukrainian community’ cited as ‘supporting’ and presumably publishing the newspaper was known for its anti-Kyiv position and had probably been specially created for propaganda purposes by the occupation regime in 2016.

The same Russian-controlled media used for pushing the idea of Crimean Tatars being ‘grateful to Putin’ for annexation also invariably make a great deal out of any ‘foreign visit’ to Crimea.  The politicians who have turned up from France, Germany, Bulgaria and Italy, are invariably presented as being part of the mainstream political life in their countries.  Nothing is said of the fact that most are members of marginal, usually far-right, though occasionally extreme left political parties, known for their pro-Kremlin position.  See, for example, French Collaborators Kiss Monument to Russian Invaders of Crimea.

All such propaganda is aimed at creating the illusion that the world has accepted Russia’s illegal occupation of Crimea and that the population of Crimea is thanking Putin – like the placard during the darkest Soviet days with a young girl seen “thanking comrade Stalin for our happy childhood.”