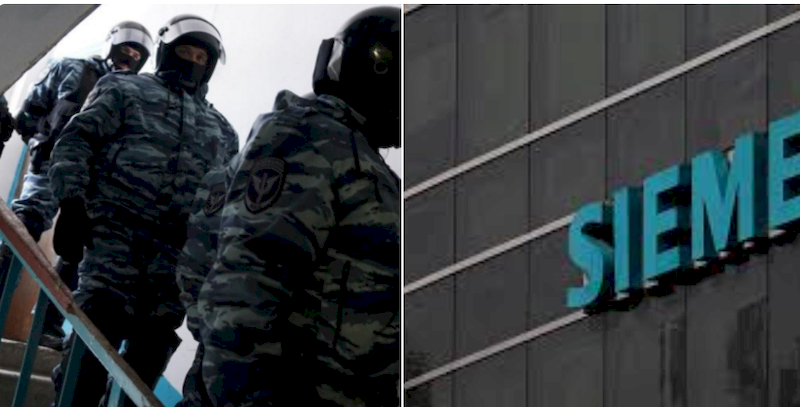 Siemens is continuing its attempts to present itself as the aggrieved party over the delivery of Siemens gas turbines to Russian-occupied Crimea.  The grounds for disbelieving them are strong enough to make it critical that both the German prosecutor and the EU respond.  It is also vital that the loop-holes in sanction documents or deliberate sanction-bypassing methods, used by major companies, such as Adidas, Metro Cash & Carry,  Auchan, Volkswagen, DHL, Visa and Mastercard are also challenged.

Siemens has claimed it was deceived, and is adamant that it will not happen again.  Its original suggestion, after the scandal over gas turbines provided to Crimea broke, that it might leave Russia, has proven empty, and it has already signed a contract with Russia for a further three turbines.

There are strong grounds for treating all Siemens’ denials of collusion with scepticism.

The story it tells is that it believed it was providing four gas turbines for a power plant in Taman, Southern Russia.

There was no such power plant, and it was known by the summer of  2016 that none was likely to be built in the foreseeable future as the tender had been terminated ‘for lack of bidders’.

None of this could be called surprising.

The first report that Siemens Gas Turbine Technologies LLC, the St Petersburg subsidiary of Siemens, was to provide gas turbines for new power stations in Crimea was made in a Vedomosti report on June 30, 2015.   Vedomosti reported that the deal had been reached in Spring with the Siemens turbines officially contracted for a station in Taman in Russia, but in fact destined for Crimea.

Siemens said nothing except that it complied with international sanctions. It continued to repeat this line despite numerous other reports.  Reuters had, for example, in August 2016, reported that plans to use the turbines in Crimea had been finalized.  Siemens categorically denied this and claimed that its “its joint venture is making turbines for a separate plant on Russia’s Taman peninsula” (more details here)

It was already clear that there was no “separate plant on Russia’s Taman peninsula”, nor going to be since the tender had received no bids.

It was again Reuters who reported on July 5, 2017 that the gas turbines had arrived in Crimea.  It seems likely that, had nobody noticed the turbines, that Siemens would have continued to pretend that they were at the Taman Peninsula.

Siemens has now undertaken some legal proceedings in Russia, the outcome of all of which is known in advance.  The Bavarian Prosecutor’s Office is reportedly looking into this case, but a long time has passed, and there is no indication that they are making progress.

The message this sends others wishing to deny knowing despite being publicly told for two years is clear.

In January 2018,RBC reported that the Crimean Zaliv Factory, which was unable to buy generators from the Finnish Wärtsilä because of sanctions, had managed to buy such generators produced by Germany’s MAN.   The latter claimed to know nothing about this and that it had not sold anything to Zaliv in the last 10 years.  It did however say that their generators could have been provided for other vessels, and then resold, with MAN having no control over this.

The same could be said of equipment from Finland’s Wärtsilä, but its refusal to breach sanctions simply made Zaliv look elsewhere. The MAN spokesperson did not mention Zaliv having approached them and received a refusal, which would surely have been the obvious step after Wärtsilä said no.

According to an expert whom RBC spoke with, the story is rather different from that with Siemens since the generators in question are made in bulk, not individually, and it is therefore at least conceivable that these were resold generators.

Since the EC spokesperson referred any questions about possible sanctions violations to the individual EU member state, it is worth noting the response from a German government official.  He informed RBC that the government does not comment on export issues of private companies, and that it was the latter’s responsibility to comply with EU sanctions.

Who does respond where sanctions are not observed remains a mystery.

Ivan Zhilin, writing for Novaya Gazeta, has probed some of the other methods used to bypass sanctions.

Visa and Mastercard did initially leave Crimea – for around a year. Officially they have still left and are fully complying with sanctions.

The problem is that cards with Visa and Mastercard have been freely used in occupied Crimea since 2015.

Zhilin was told by an unnamed source clearly in one of the companies, that they had been forced into this situation.  In June 2014, Russia had created a ‘National System of Payment Cards’ and soon forced the companies to transfer all ‘internal Russian’ operations to be processed in Moscow.

Since Russia as occupying state is including Crimea in such operations, Visa and Mastercard are now used in Crimea, and the companies’ formal compliance with sanctions is totally cosmetic.

Judging by the unnamed source, they stood to lose the entire Russian market if they refused to transfer their processing to Russia.  Presumably they now make no protest about cards being used in occupied Crimea for the same reason.

Is there really no choice?  It is surely questionable whether Moscow would seriously want to throw two such major financial service providers out of Russia if they stood their ground.

There must be some means of distinguishing the cards since Zhilin notes that cards with Visa or Mastercard, issued by Crimean banks, cannot be used abroad.

Ukraine initiated criminal proceedings in April 2017 over the fact that the French chain Auchan was still operating in Crimea, and was even transporting goods illegally from Russia using ferries to Kerch.

Ukraine’s authorities were typically behind Reuters which had, back in September 2016 reported that the French Auchan and German Media AG were both operating in Crimea and both claiming that this was not in breach of sanctions, although the goods were “being shipped there from Russia via a ferry and port that are subject to EU sanctions”.

The key claim by both retailers is that this is not a breach of sanctions since the stores are operated by Russian subsidiaries which are not subject to EU sanctions.

So if a Ukrainian company begins using Auchan and Metro logos, etc. to sell their own goods, the retailers would say nothing?

Judging by the Reuters report, it seems that nobody wants to take responsibility for addressing such obvious sanction-avoiding, with the EC spokesperson saying it was up to EU member states to implement sanctions.

That report was published 18 months ago.  There is no evidence that anything has changed, or that those bypassing sanctions have been held to answer.

Both Volkswagen and Addidas have ‘expressed surprise’ at Ukraine’s criticism of them for selling their goods in Crimea.  Both claim that they are not in breach of sanctions, and Zhilin suggests that while their goods are covered fully by US sanctions, they slip through the EU sanctions net which does not directly prohibit the sale of cars, clothes and food items.

Zhilin also writes that the authorities in some EU countries have the power to issue permits for selling goods and services in Crimea.

If this is the case, then urgent measures are needed to rectify the situation.

Russia is not only occupying Ukrainian sovereign territory.  It is also committing grave human rights violations, and any attempts to carry out ‘business as usual’ are totally unacceptable.