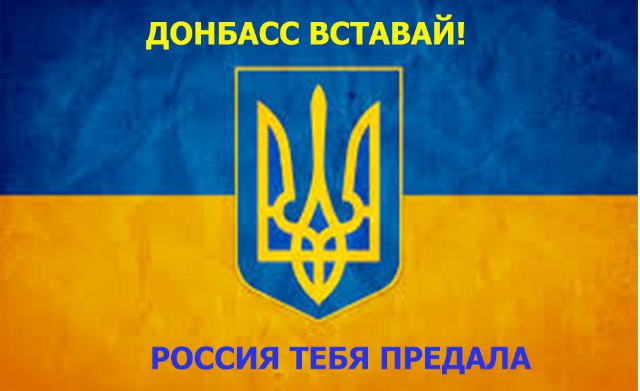 69-year-old Anastasia Mukhina (or Mushnina) was seized on 8 February in the self-proclaimed ‘Luhansk people’s republic’ [‘LPR’] seemingly for posting leaflets saying: “Rise up, Donbas.  Russia has betrayed you”.  The so-called ‘LPR ministry of state security is now claiming that they found explosives in her flat and accusing her of having “abetted a Ukrainian sabotage group’.

As is most often the case, news of the ‘arrest’ first came from social media, and the sources that Radio Svoboda has since managed to talk to asked for their names to be concealed out of concern for their own safety.

The social media reports state that Anastasia Volodymyrivna Mushnina, born in 1949 was taken prisoner by people from the ‘ministry’s department for fighting extremism’.  The first such reports from February 9 suggest that both the explosives (listed) and leaflets with the above-mentioned symbol, as well as a Ukrainian ‘tryzub’ with the words ‘They’re waiting for you at home’.

Radio Svoboda journalist Oleksandr Byelokobylsky has spoken with an unnamed source close to ‘the LPR interior ministry’ who let him have a copy of an entry in the ‘police register of crimes and incidents’.

This calls the woman Anastasia Mukhina and says that she was detained 20 minutes walk from her home “while posting leaflets with Ukrainian symbols and the text ‘Rise up Donbas! Russia has betrayed you!  Choose the future, choose Ukraine”.

There is then a second entry which records removal of explosives from the woman’s home and makes it clear that she is to be ‘charged’ with purchasing, possession or sale of weapons, ammunition (under Article 267.1 of the so-called ‘LPR criminal code’).  This could carry a ‘sentence’ of up to four years’ imprisonment.  If they decided that this had been as part of a group, or by conspiracy, this would increase to 6 – 8 years.

A person from an adjacent building, speaking on condition of anonymity, confirmed that her home is now locked up and that he was already unable to reach her on February 9.  Anastasia Volodymyrivna is a widow, and seemingly has only one brother with whom she is not on good terms.

The same source says that another neighbour had been told by a ‘police officer’ that she had been detained.  He had apparently said that they had been told to be vigilant in scrutinizing people’s views.

One of the other suggestions, again originating from the social media is that ‘LPR officials’ are trying to get good statistics of ‘catching extremists’ following the fast-track adoption of a number of ‘laws’ on 2 February.  As reported, these documents included one aimed at hunting down and prohibiting so-called extremism in religious or political organizations, as well as in the media.

Whatever ‘extremism’ may be, the bill now establishes “a system of state bodies” aimed at countering it.  A change was also made to the so-called ‘LPR constitution’ allowing for individuals to be detained for up to 30 days without a court order.  This is purportedly to prevent actions which could threaten the ‘republic’s security, and is allegedly during the unspecified period of ‘martial law’.

How much this changes anything is another matter since most of the people seized in the self-proclaimed ‘Luhansk and Donetsk people’s republic’, have simply disappeared, with few, if any, normal procedural requirements observed.

In September 2017, Yulia Polishchykova from Rovenki disappeared, with neighbours saying that she had been taken away by men in training gear who claimed to be from the ‘LPR ministry of state security’.  The whole story was extremely menacing and one of many.

While the reasons why some people are seized remain unclear, in other cases it is evidently linked with pro-Ukrainian views.

Among the civilian hostages released as part of an exchange on 27 December 2017 was blogger Edward Nedelyaev who had been held prisoner for 14 months.  His truthful blogs about life in the so-called ‘republic’ had got him a 14-year sentence for supposed ‘treason’.  Two young football fans - Vlad Ovcharenko and Akhtem Akhmerov  - were also released.  They had been sentenced to 17 and 13 years respectively for a Ukrainian flag and a flash-mob burning the ‘LPR’ flag, and had already been held prisoner for 15 months.