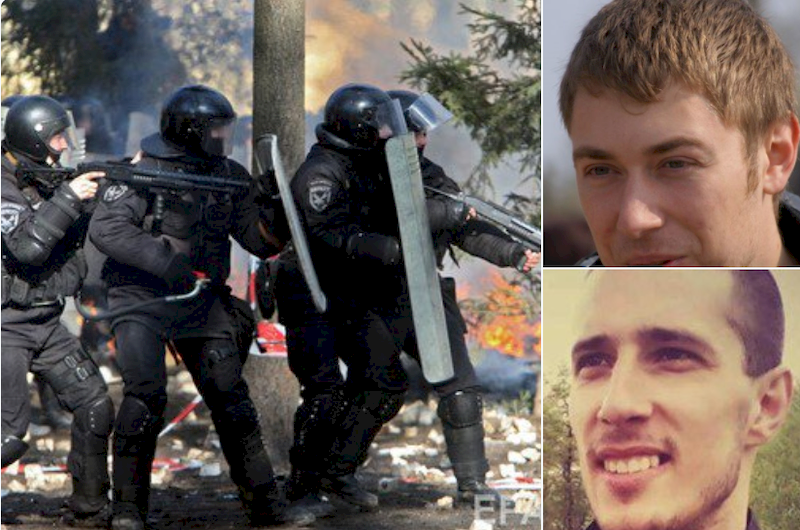 Russia is continuing to deny any involvement in events in Ukraine from Euromaidan to the war in Donbas.  Yet it cites concern about “national security” as its reason for rejecting requests to extradite or even just interrogate former Ukrainian Berkut officers, some of whom are suspected of having taken part in the gunning down of unarmed Maidan activists.  The refusal to cooperate over suspected killers is particularly suspect given the large number of Ukrainians Russia is imprisoning on charges linked solely with Euromaidan or with alleged involvement in the Right Sector movement which is legal in Ukraine.

Ten of the 23 ex-Berkut riot police officers suspected of gunning down protesters in the last days of Euromaidan have received Russian citizenship, while a further two men have been given ’refugee’ status.  Russia is, of course, giving refuge to former Ukrainian President Viktor Yanukovych and a large number of other former-high-ranking officials.  Serhiy Horbatyuk, Head of the Special Investigations Department, reports that they are prevented from questioning any of these people, including the ex-Berkut men.  He calls Russia’s claim that this is due to considerations of national security “rather incomprehensible”.

While Horbatyuk is cautious in what he says, Russian involvement in the last days of Euromaidan is something that his team is investigating.  It is known, for example, that Russia’s FSB were providing consultation to the Yanukovych regime, advising them on how to counter the protests.  There were also visits from people in Russian President Vladimir Putin’s administration, and a major delivery of so-called ‘humanitarian aid’ – in fact, various forms of anti-protest special means.

It was not only Ukrainians who expressed the fear that the Kremlin wanted bloodshed, so that Yanukovych’s path to greater movement towards the EU would be blocked once and for all.  What it is that Moscow believes could endanger national security can, for now, only be guessed.

Russia’s claim that Maidan and the war in Donbas are internal Ukrainian matters would be more convincing if it did not so actively persecute Ukrainians for their part in Maidan, or for their involvement in Right Sector, a right-wing nationalist organization which came to prominence during Euromaidan.

A number of Ukrainian political prisoners, including filmmaker Oleg Sentsov and Valentyn Vyhivsky, were active participants in Maidan. Vyhivsky was illegally taken to Moscow and held incommunicado until after his ‘spying trial’, so we know only that he was tortured, not what the FSB wanted him to ‘confess to’.  Sentsov was tortured to force him to give ‘testimony’ against Maidan, and against the government formed after Yanukovych fled the country.

Two men are, most incredibly, serving sentences for unprovable ‘offences’ which they are supposed to have committed against Ukrainian citizens in the capital of Ukraine before Russia’s invasion of Crimea. .  Natalya Poklonskaya, the so-called ‘prosecutor’ installed after Russia’s invasion, used former Berkut officers who had later switched allegiance and taken Russian citizenship, for the surreal trials, first of Oleksandr Kostenko, then of Andriy Kolomiyets.

Oleksandr Kostenko is a former police officer who took part in Euromaidan from the beginning.  He was arrested in Russian-occupied Crimea on Feb 5, 2015, and savagely tortured to extract a ‘confession’ for over 24 hours before the officially recorded time of arrest.

Kostenko was charged with slightly injuring a Ukrainian Berkut officer in Kyiv on Feb 18, 2014.  He had, it was claimed, deliberately aimed a cobble stone at V.V. Poliyenko, with this allegedly resulting in Poliyenko receiving an injury “in the form of a large haematoma on the left shoulder”.  Kostenko was supposed to have been motivated by “a feeling of ideological hatred and enmity to law enforcement officers”.  As is often the case where the charges are obviously politically motivated, Kostenko was also charged with possession of a rifle barrel which they claimed to have found.

Kostenko is due to be released in the middle of 2018, having been forced to serve a 3.5 year sentence on these grotesque charges. He is recognized as a political prisoner by the authoritative Memorial Human Rights Centre

The ‘trial’ of the then 22-year-old Andriy Kolomiyets and his 10-year sentence on June 10, 2016, should have deterred any Ukrainians from travelling to Russia.  Kolomiyets had been living with his partner and her children in the south of Russia when seized, tortured, and then taken to Crimea.

The young man was charged with ‘attempted murder’ of two Ukrainian Berkut officers during the Euromaidan protests in Kyiv.  It was claimed that he had thrown a Molotov cocktail at the men which “caused them pain”.   They had never made any complaint at the time, nor sought medical treatment, yet two and a half years later they both claimed that they remembered Kolomiyets and “their pain”. The prosecution was under Article 30 § 3 and 105 § 2 of the Russian Criminal Code, namely “attempted murder of 2 or more people in connection with their official activities … out of motives of political and ideological hatred”.

Kolomiyets was sentenced to 6 years on the ‘attempted murder’ charges and 4 years over the hashish charge.  He too is a recognized political prisoner.

Right Sector came to prominence in January 2014 when Yanukovych attempted to push through draconian anti-protest laws, normally referred to as the 16 January Dictatorship Laws.  Russia has consistently demonized it and typically claimed that Ukrainian filmmaker Oleg Sentsov, civic activist Oleksandr Kolchenko and two other opponents of Russian annexation of Crimea were part of a ‘Right Sector terrorist plot’.  Not only was there no evidence of Right Sector’s presence in Crimea or of any ‘plot’, but the idea that Kolchenko, a committed left-wing anarchist should have been involved in a right-wing organization was laughable.  Sentsov is, nonetheless, serving a 20-year sentence, Kolchenko 10 years.

Russia officially banned Right Sector as ‘extremist’ in November 2014 and is now using this as an illegal pretext for imprisoning Ukrainians and one Russian, permanently resident in Ukraine.  At least one of the men was probably abducted from Ukraine.

The first such ‘trial’ is now underway, though, ironically, it is of a person of somewhat ill repute among activists who knew him in Ukraine.  The activists do not believe that 31-year-old Mykola Dadei was genuinely seeking to help the Ukrainian Army, however none of this seems to worry the Russian FSB.  Dadei had moved to Novorossiysk to be with his Russian wife, and was arrested there in July 2017.

Whatever the grounds are for questioning Dadei’s ideological motives for his civic activities, he has reportedly stated clearly in court that Crimea is Ukrainian territory, annexed by Russia.  That statement of fact, reiterated by the UN, and all democratic countries, can easily get you a prison sentence in Russia or occupied Crimea.

Dadei is charged under Article 282.2 § 2 with ‘involvement’ in an organization declared extremist in Russia.  Quite literally for having posted two advertisements about a collection to help a Ukrainian volunteer battalion, he could face a sentence of up to five years’ imprisonment.

Oleksandr Shumkov was the next Ukrainian to be abducted to Russia and imprisoned. The 28-year-old disappeared towards the end of August 2017, however it was only on September 26 that Larisa Shumkova received a letter from the Russian FSB for the Bryansk oblast informing her that her son had been detained on September 6 on suspicion of “committing a crime”, also under Article 282 § 2  (‘involvement in an extremist organization’).

Shumkov is a former Maidan activist, a member of the Kherson branch of the Union of Ukrainian Youth in Ukraine and a contracted military servicemen for the Ukrainian Armed Forces.  That would already be enough to deter him from entering Russia of his own free will, but he is also an ex-security guard to Dmytro Yarosh, who is now an MP, but was the leader of Right Sector.

On 18 October 2017, the Russian Investigative Committee and FSB arrested Roman Ternovsky, seemingly for attending entirely legal Right Sector events in Ukraine and for promoting the organization on Facebook.  He was allegedly seized in the Rostov oblast (Russia).

The reports claim that “Ternovsky’s above-listed activities were directed against the interests of the Russian Federation and are classified by the investigators under Article  282 § 2 of Russia’s criminal code, namely participation in an ‘extremist organization’.

The evidence is simply damning.  “During the course of a search of the suspect’s residence in Rostov on the Don, items of clothing and other personal things were discovered with Right Sector symbols”.

In all three cases, Ukrainian citizens have been arrested for carrying out activities on Ukrainian territory linked with an organization which is legal in Ukraine.

The fact that 37-year-old Denis Bakholdin is a Russian citizen does not make the charges against him any more sane, since he is also accused of activities in Ukraine.  Bakholdin is a Russian activist and fierce critic of Russia’s war against Ukraine.  He had been living Ukraine since 2014, but when his mother fell ill in March 2017, he tried to visit her and was detained in the Bryansk oblast, and remanded in custody, on the same charges of involvement in Right Sector.

The most chilling part of all of these arrests and ‘trials’ is that the only difficult moment appears to be in getting Ukrainians (or Russian activists) into the clutches of the Russian FSB. Afterwards, Russian prosecutors and judges provide the sentences demanded.