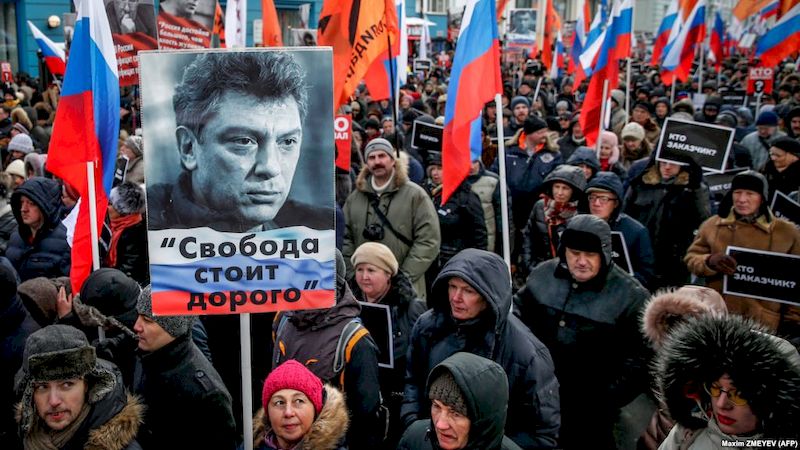 Rallies were set to be held in numerous cities across Russia ahead of the third anniversary of Nemtsov’s murder, which drew international condemnation and highlighted the dangers faced by Russians who oppose the Kremlin.

Nemtsov, a vocal critic of President Vladimir Putin, was shot dead on a Moscow bridge overlooking the Kremlin on February 27, 2015.

Thousands marched in central Moscow in a demonstration featuring placards with slogans such as "Democracy is the right to kick out authorities" and "I’m against the annexation of Crimea," a reference to Russia’s 2014 seizure of the Ukrainian peninsula on the Black Sea.

One group of protesters carried a banner that read "Retribution is inevitable: We won’t forget, we won’t forgive."

Some demonstrators chanted "Putin is a thief" and "We are Boris Nemtsov."

One Russian group that monitors crowd sizes at public demonstrations estimated that as many as 7,600 participated in the Russian capital, while Moscow police put the figure at 4,500.

Kremlin critics frequently accuse authorities of underestimating crowd sizes at protests in order to portray them as marginal events.

Prominent liberal opposition politicians attended the Moscow demonstration as well. They included Grigory Yavlinsky and Ksenia Sobchak, who are running for president in a March 18 election that is all but guaranteed to hand Putin a new six-year term.

One demonstrator in Moscow, who gave his name only as Vadim, said he was "protesting against a dictatorship."

"You have to do something, take at least one step to make things better," Vadim, who said he is a pensioner, told RFE/RL.

In the Urals city of Yekaterinburg, activists said police attempted to detain a protester who was waving a Ukrainian flag but that his fellow demonstrators prevented them from doing so.

Earlier on February 25, dozens of Nemtsov’s supporters marched in the Siberian city of Novosibirsk and the capital of Russia’s Tatarstan region, Kazan, on February 25. In Novosibirsk, demonstrators staged a rally at a monument to victims of political repression.

In July, a Moscow court found five men from Russia’s North Caucasus region of Chechnya guilty of the murder and sentenced them to lengthy prison terms.

But relatives and associates charge that his assassination was ordered at a higher level. They say justice will not be served until the person or people who ordered the killing are identified and prosecuted.

As with previous high-profile killings -- including the murder of investigative journalist Anna Politkovskaya in 2006 -- government critics have voiced suspicion that the culprits will never face justice because an honest investigation could lead to figures who are close to Moscow-backed Chechen leader Ramzan Kadyrov or to Putin’s inner circle.

The February 25 demonstrations come just days after Moscow’s mayor said a plaque honoring Nemtsov will be mounted on the apartment building where he lived in the Russian capital.

Moscow Mayor Sergei Sobyanin wrote on Twitter on February 22 that the decision to mount the plaque was made following a request from a presidential candidate Ksenia Sobchak.

Moscow authorities had previously prevented activists from installing a similar plaque on the bridge where Nemtsov was shot dead, where supporters have established a makeshift memorial to the slain politician.

That memorial has been repeatedly ransacked or removed by police or unidentified individuals.