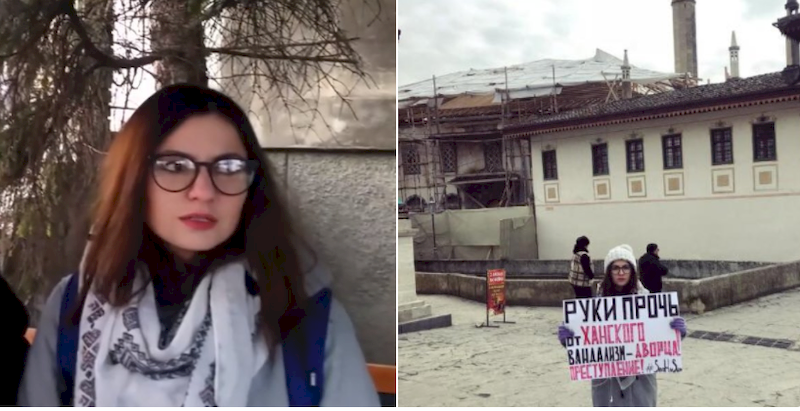 28-year-old Elmaz Akimova was harassed on 25 February for her peaceful protest over the “shocking vandalism under the guise of restoration” which is destroying the Khan’s Palace in Bakhchysarai.  The man and woman did not physically assault her, but they hurled foul abuse and threatened her, before seizing her placard and ripping it into shreds.  The placard had read: “Hands off the Khan’s Palace.  Vandalism is a Crime’.   The assault on her was also an offence and Akimova has lodged a formal complaint, though the chances of this even being investigated by the Russian-controlled police are remote.

Writing later about the events on Sunday, Elmaz explained that this “was the day when my conscience would not allow me to do nothing any longer.  When I understood that if I don’t take action in defence of our Khan’s Place, I would no longer have the right to cross its threshold.

A solitary picket was what I was able to do.  If it helped draw the attention of even one person to this appalling vandalism against the Khan’s Palace, then it was not in vain. What they are now doing to our main historical monument of architecture is a crime.  And we simply have no right to remain silent about this crime!  There will be no justification for such silence.”

She stood near the territory of the Khan’s Palace all day.  Some of the people who came up supported her, others had known nothing about this so-called ‘restoration’ which is destroying a monument which is on UNESCO’s potential list of sites of world heritage.

It is clear from her comments that the two assailants’ abuse was also racist. They violated her rights in many ways, she says, but adds that she believes she can conclude that she did succeed in attracting public attention!

The situation with the Khan’s Palace is by now critical.  Elmira Ablyalimova, the former head of the Bakhchysarai Historical, Cultural and Archaeological Museum-Reserve, reported a week ago that there are already cracks in the Khan Mosque due to pressure on the structure from the totally barbaric methods being used.

The Khan’s Palace in Bakhchysarai is on UNESCO’s World Heritage Tentative List and is a site of enormous cultural and historical significance for the Crimean Tatar People, and for Ukraine.

Russia is yet again attempting secrecy in order to deny facts that are clearly undeniable.  What is underway is not careful restoration, requiring expert consultation and experienced restorers working with great care, and, as much as possible, with original materials, but barbaric vandalism.

The work has been entrusted to a Moscow-based general contractor Atta Group Architectural and Planning Holding, using a Simferopol construction firm called Kiramet.  Neither company has any experience in restoration work.  Lawyer Nikolai Polozov  believes that the aim is to get quick profit from the 200 million roubles (3.5 million USD) in Russian state funding allocated for the work, and they are doing this through flagrantly destructive means.  Original beams have been simply removed and replaced with contemporary composite planks.

The denials are especially absurd as there are photos of all the original hand-made ‘Tatarka’ tiles packed away, with these to be replaced by factory-made Spanish tiles made to ‘look old’.

The photos also demonstrate the territory of the Khan’s Palace resembling a demolition site, with original stones left lying about as if they’re rubbish.

These construction workers are destroying centuries-old wall-paintings through their incompetence and are everywhere using contemporary materials which do not match the period.   This is likely to have disastrous consequences.  By replacing authentic crossbeams with concrete beams, they are making parts of the building too heavy.  Concrete should not be used since it can only intensify the erosion of the walls’ limestone masonry.

Construction work, using heavy equipment, is being carried out near tombstones or elements of cultural heritage inside the Mosque. If this has not caused the cracks already observed, more seem inevitable (further details here).

Please help by writing to UNESCO as well as to politicians, people involved in protecting sites of major significance, others.  Whether the wanton destruction underway is about corruption, or another attack on the Crimean Tatar people, it must be stopped.  Elmaz Akimova is right – we cannot remain silent.