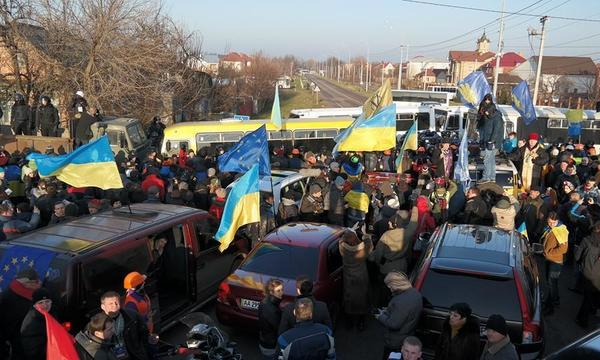 Roman Maselko, one of the lawyers representing the families of those killed on Maidan, and other Maidan victims reports that the first ruling was passed by the Supreme Court in its supposedly new makeup on 19 February – during the anniversary of the bloodiest days of Maidan.

Viktor Stepanenko had been dismissed in September 2016 from his post as judge  of the Vasylkiv City-District Court.  He was one of the judges during Maidan who passed knowingly wrongful rulings stripping Automaidan activists of their driving licences.

He won his appeal essentially on procedural grounds which gives reason to assume that all 19 judges dismissed on the basis of a decision taken by the Verkhovna Rada on 29 September 2016 can expect to be reinstated.

Parliament had gathered at an extraordinary session on Sept. 29, 2016, prompted by an appeal from President Petro Poroshenko two days earlier.  Maselko notes that it was clear even then that this was in breach of procedure which requires that a judge be notified of any session regarding his or her post three days in advance.  He says that “in view of the Verkhovna Rada’s ceremonial role”, this rule had been ignored.

The Supreme Court took a different attitude.  Ruling in the case of Stepanenko, it concluded that such a breach of procedure had infringed his right to take part in the hearing.

It also drew issue with the view that parliament’s role is purely ceremonial.  After analysing the relevant provisions of the laws involved, the Supreme Court notes that parliament’s decisions must be well-founded, and therefore adopted after taking into account all the circumstances. This would necessitate allowing for discussion and for the judge or his representative to address the hearing.

Not only the other 18 ‘Maidan judges’, but also 10 other judges dismissed that day can expect a similar ruling if they have chosen to challenge their dismissal.

What this means is that 29 judges in all will be able to continue their work as judges, and will also be entitled to backpay for the period when they were not allowed to practise.  A full list of the judges involved can be found here.

The list includes Svitlana Volkova, from the Pechersky District Court in Kyiv who in September 2014 released from custody Dmytro Sadovnyk, commander of the Berkut unit suspected of carrying out 49 of the killings of unarmed activists on Maidan.  Sadovnyk immediately fled and is now believed to be in hiding in Russia, probably with Russian citizenship.  Taras Shevchenko, Co-Chair of the Reanimation Package of Reforms Council, reported shortly after the parliamentary session that a criminal investigation had been initiated against Volkova.  Whether it has ever been more than initiated is unclear.

Others include Oksana Tsarevych, notorious not only for her rulings against Maidan activists, but also for taking part in the politically motivated trials of Yulia Tymoshenko and Yury Lutsenko.

Valery Chornobuk  was the head of the Court of Appeal in Crimea in March 2014, and, according to Maselko, urged colleagues to recognize the Russian occupation regime.  He apparently later found a post in the Dnipropetrovsk Regional Court of Appeal.

Viktor Tatkov is a former judge of the High Economic Court and member of the High Council of Justice under the presidency of Viktor Yanukovych.  According to the investigative journalists from Slidstvo.info, he and his then deputy Artur Yemelyanov created a machine for raking in money through the sale of court rulings.

Attempts to clean up Ukraine’s judiciary since its grave degradation during the Yanukovych years have less than successful.  While in the case of the judges dismissed on 29 September 2016, it is possible that the Supreme Court had no choice, the same cannot be said of all decisions.

In May 2017, for example, the High Council of Justice found no grounds for dismissing Yevhen Ablov, the Kyiv judge who had ordered Berkut riot police to forcibly disperse Euromaidan activists in December 2013.  The attempt failed after the bells of St Michael’s Cathedral, helped by people on social networks, warned of the danger and thousands of Kyiv residents sped to defend Maidan.

Other judges who issued unwarranted rulings during Maidan have passed through professional assessments without difficulty.

All of this is of particular concern given the repeated warnings from Serhiy Horbatyuk, the head of the Special Investigations Department investigating Maidan crimes of downright sabotage of Maidan cases by many judges.   This is seen in deliberate procrastination, under time bars have been exceeded, or decisions to release suspects from detention with them subsequently absconding.

Not surprisingly, the Ukrainian public’s level of confidence in the judiciary remains pitifully low.