Arrests with torture of ‘witnesses’ in Russian-occupied Crimea 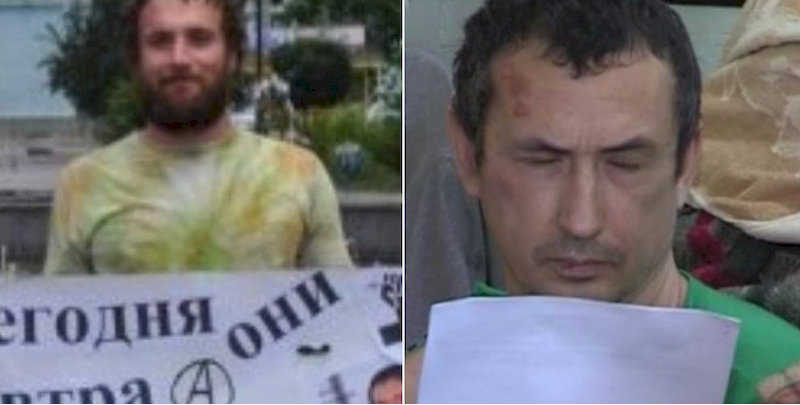 A number of searches and arrests were carried out in Simferopol and Sevastopol on March 2, with at least the measures against left-wing activist Alexei Shestakovych reported to have been with the use of torture.  This is not the first time that Shestakovych has faced repressive measures under Russian occupation, although he and another four or five men were allegedly targeted as ‘witnesses’ in the politically motivated prosecution of Yevpatoria activist Yevhen Karakashev.

Searches began in the early morning at the homes of six men, five of them anarchist activists.  While the men who turned up at the flat of Oleksiy Prysyazhnyuk appear to have behaved themselves, the searches of the other four anarchists was with gratuitous force.  Ihor Panyuta, Artem Vorobyov, and probably Ivan Markov, were forced to the floor and had plastic handcuffs put on them.

According to Oleksiy Shestakovych’s mother, the search lasted four hours with her son forced to lie on the floor all that time in his underwear and in handcuffs.  She had tried to at least shut the door to the house, but was prevented by the men who insisted on holding it open, before forcing her to leave.  She saw her son taken out of the house in handcuffs and with a bag over his head, and protested, saying that he would suffocate. They ignored her.

There is no information as to why Shestakovych was jailed for 10 days on administrative charges.  Naumlyuk says that according to unconfirmed reports, the similar 10-day arrest sentence against Markov was for supposed circulation of ‘extremist’ material on social media.

The searches of the above five anarchists, as well, probably, as that of Dmytro Kisiev, were supposedly over the so-called ‘Karakashev case’.

39-year-old Yevhen Karakashev, an anarchist activist from Yevpatoria, was arrested on February 1, and is now in custody facing charges which the Memorial Human Rights Centre has already suggested are politically motivated.

The charges are extremely serious - of inciting enmity, under Article 282 § 2 of Russia’s criminal code, and of ‘public calls to terrorist activities or public justification of terrorism’.  The latter carries a sentence of up to seven years.

Karakashev was detained after an equally rough search, however the multiple abrasions and other injuries on his body and long period before he was allowed to call a friend and ask him to contact a lawyer suggest that torture was applied. The ‘investigator’, Allgiz Abushev was later ‘unable’ to remember how long Karakashev had been held in handcuffs.  In remanding him in custody on 2 February, ‘judge’ Alexei Nanarov saw no need to question the prominent abrasion on Karakashev’s forehead, and the police have since refused to initiate proceedings over the detained man’s injuries.

If not even earlier, both Shestakovych and Karakashev would have attracted Russian FSB attention in the summer of 2016 when a group of Crimean anarchists tried to hold a picket outside the FSB office in support of  fellow anarchist Oleksandr Kolchenko and other political prisoners.  They were driven away, with Shestakovych then detained and fined.   Shestakovych later faced further harassment and court proceedings, with the pretext then also a post on social media from four years earlier.  It seems that Karakashev was also summoned to the so-called ‘Centre for Countering Extremism’ at the beginning of 2017, but refused to provide the required ‘explanation’.

The Memorial Human Rights Centre reacted swiftly, stating that there is strong likelihood that “the criminal proceedings against Yevhen Karakashev were initiated in the context of his opposition civic and political activities as a frequent participant in protests in Crimea.”   They view this as part of a mounting attack on left-wing activists and anti-fascists since January 2018.  There seems every reason to see the latest searches and detentions in the same light.