Four Russian invaders sentenced to 11 years for torturing hostages in Kharkiv oblast Kherson journalist, imprisoned by the Russians, tells of killing, rape and torture of hostages Russia uses Kherson ‘evacuation’ for enforced disappearance of more Ukrainian hostages and POWs Silence abets Russia in torturing and risking the lives of Ukrainian hostages and POWs in occupied DonbasAbducted 16-year-old was forced to clean up after Russian invaders" torture of Ukrainian POWs and hostagesRussia abducts 25 volunteers delivering humanitarian aid to Mariupol, threatens to put them ‘on trial’ Ukrainian POWs and abducted civilian hostages illegally imprisoned in Russian-occupied Crimea Russian Rule of Lawlessness in Occupied Crimea and DonbasRussia kills Minsk Agreement, with lives of over 300 Ukrainian hostages and POWs in danger Crucial law adopted to help Russia’s Ukrainian political prisoners and hostagesUkrainian accused of torturing hostages at Russian-controlled Izolyatsia secret prison flees to France and "asks for political asylum’Donbas militants seize Ukrainian teacher trying to help her ailing mother Donbas hostages tortured for a Russian propaganda program against Ukraine Mother with grave health issues imprisoned by Russian-controlled militants for trying to save her son400 Ukrainians imprisoned without a crime in Russia, occupied Crimea and Donbas Donbas militants threaten to kill Ukrainian hostage’s children if he doesn’t ‘confess’Nine former hostages to testify against ex-militant over torture at Donetsk Izolyatsia secret prisonElderly Donetsk hostage with hip fracture sentenced to 17 years for supporting Ukraine Ukraine to try ex-militant for torturing hostages at ‘Izolyatsia’ secret prison in occupied DonetskFormer Kremlin hostages put release of all Ukrainian political prisoners on the agenda
• Topics / Terrorism 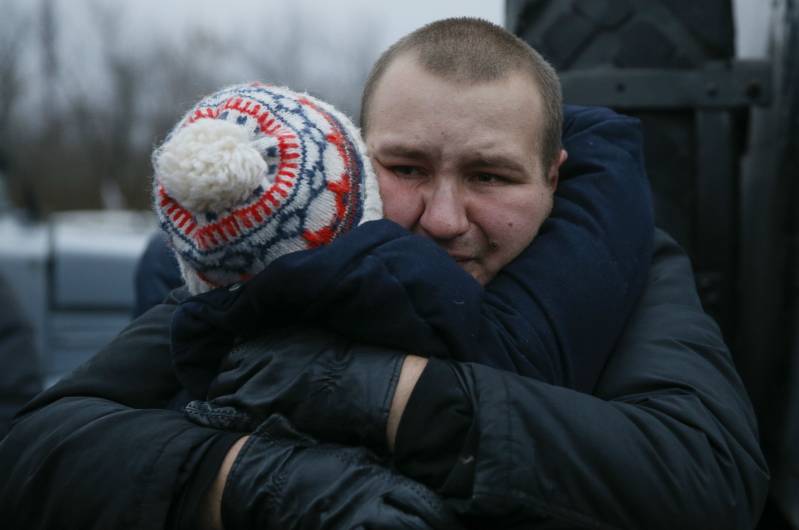 A prisoner (back) of war (POW) from the Ukrainian armed forces is embraced during the exchange of captives in Horlivka in Donetsk region, Ukraine December 27, 2017. REUTERS/Valentyn Ogirenko

Oleksiy Kanarskyy, a twenty-five-year old Ukrainian, never thought he would celebrate January 1 in freedom. His hopes had faded during three years of detention in the conflict zone in eastern Ukraine, after endless promises of a prisoners’ exchange between the Ukrainian government and Russian-backed separatists. But on December 27, 2017, the largest prisoner swap since the conflict broke out in 2014 brought him and seventy-three other Ukrainian detainees to freedom, in exchange for over 200 insurgents.

"I did not believe them at first,” Kanarskyy says, repeating a common phrase among the prisoners.

When Kanarskyy recollects how his little fingers were bound with bare wire and how he was tortured with electric current during his detention, he convulses. He had to lie to his torturers to tell them what they wanted to hear. He fabricated a story of his service in the Ukrainian army. In fact, Kanarskyy had never been drafted. He had been earning money by assisting farmers and was caught when he forgot his passport while traveling from his native town of Shahtarsk to another in the Donetsk region.

In detention, he made new friends. One was Ivan Tyrenko, twenty-six, from the southern region of Zaporizhya. Tyrenko explains how it is easy to break people down using bare wire. The separatists named this torture "A Call Home," as they used a broken field telephone for it. The current would go through the open wires when someone dialed the phone.

"They put the wires around my thumbs and pretended to call my family. I was sitting, but felt the current going through my muscles,” he says. “I said that the number was unobtainable. For my joke they hit me in the eye brow, but stopped ‘calling.’"

Tyrenko had volunteered in August 2015. But he could not be sent to the front because he was younger than twenty-five. Nonetheless, Tyrenko wanted to be engaged and soon agreed to work as an intelligence officer. Pretending to be a local resident, he was providing data to improve the effectiveness of the Ukrainian army’s shelling. Tyrenko was caught during his third field trip while traveling by bus. He is sure that those who caught him already knew all about him and had his photo.

"The guy [who caught me] hit me with the gunstock in the nose. The blood poured out immediately,” Tyrenko recalls. “They dragged me out of the bus, put the muzzle to the back of my head, tied my hands, and ordered me to run away. They wanted to shoot me as if I were trying to escape."

Tyrenko has difficulty breathing: his nasal floor was broken and never fixed. His captors beat him until his ribs and collarbone were broken, then bound him with elastic and sent him to prison.

Oleksandr Morozov, twenty-eight, has a similar story. He has returned from detention with a new name, Cyborg, which has been given to all soldiers who were defending the Donetsk airport in the winter of 2015. Morozov doesn’t see himself as a hero. He explains how he was providing cover for his platoon a few hundred meters from the airport when he was shelled. He went faint and when he woke up, he didn’t see his colleagues. A former welder from the northern region of Sumy, Morozov recalls every detail of the two weeks he spent wandering near the airport and trying to survive the cold, hunger, and constant shelling, until he was caught by separatists.

“I decided to spend the night in the stadium and broke a window to get indoors. The separatists heard glass shatter and five or seven men arrived to investigate the noise. I did not manage to run away. In a few minutes I could not even walk,” says Morozov. “At one point I begged them to shoot me. I didn’t want to die beaten like a dog. But they wanted information.”

Later, during detention, Morozov resigned himself to an inevitable death. When he was taken to the field to be shot the only thought that scared him was that the insurgents might simply maim him for life. But the whole charade was designed to intimidate him.

After 1,058 days in prison, he lost twenty-five kilos. “He had such small fingers and knees [when he was released]. But in a month and a half he had successfully regained ten kilos,” says his fiancé Natalia as she watches Morozov happily eats dessert in a Kyiv cafe.

Like others, in the next six months he will need to restore his documents to receive the support the government has promised, over $3,500. He will use this money to organize his wedding and honeymoon, and then plans to start an agricultural business, though has never been involved in that sector before. He finds solace in a Bible he picked up from the trash while washing the floors of his jailers.

Meanwhile, Kanarskyy has secured a job as a parking attendant, and Tyrenko finds consolation in humor. Neither one has plans for the future. All they aim to do is adapt. “We will try to return to a peaceful life, especially in our heads. We need to live in peace; war is not the right thing,” says Tyrenko.

The ex-prisoners do not seem to have recovered from the shock, and are still sometimes stunned by the memory of what happened to them. Their post-traumatic stress disorder is an exposed wound that time and perseverance will hopefully heal. What helps them now is confidence that their fight and sacrifice for Ukraine was not vain.

“We should develop our country,” says Tyrenko. “There is a common saying: no one but us. It is the reality. No one will do this instead of us.”

According to Ukrainian authorities, there are around 100 Ukrainians who are still detained by insurgents. Kyiv continues negotiations in order to conduct the next wave of exchanges as soon as possible.

Iuliia Mendel is a Ukrainian journalist; she contributes to the New York Times and Politico.eu, and is a 2015 World Press Institute Fellow.