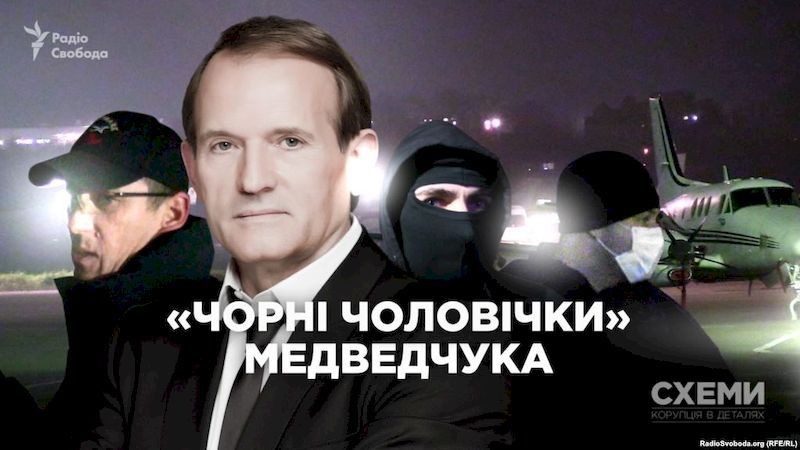 Ukraine’s National Police have initiated a criminal investigation into claims that journalists from the Skhemy anti-corruption program violated the right to privacy of controversial Ukrainian politician Viktor Medvedchuk. The move comes soon after criminal charges were brought against guards who tried to prevent the journalists from carrying out their investigation, and is viewed by the  Skhemy team as retaliation and an attempt to intimidate them.

Viktor Medvedchuk is a very controversial Ukrainian politician whose close friendship with Russian President Vladimir Putin has helped him play a key role in prisoner exchanges.  These included the exchange of Nadiya Savchenko for two Russian military intelligence officers captured fighting in Donbas, and the major hostage exchange in December 2017.

It is purportedly because of his role in such negotiations that the Ukrainian authorities have allowed his private plane to fly directly between Ukraine and Russia, despite the blanket ban on such flights since Russia’s aggression in 2014.

The Skhemy journalists decided, quite legitimately, to determine whether this special dispensation was being used by Medvedchuk only for the purpose for which it had been given, and not to pursue his own business interests.  They had investigated such business trips from back in November 2016, and had reason to suspect that his travels on 7 November, 2017 were also business-related.  They therefore arrived outside the VIP terminal of ‘Kyiv’ Airport.

The journalists were in a public area, carrying out their professional work which Medvedchuk’s guards used various methods, including force to obstruct, as the video footage here clearly shows. In masks and balaclavas, they effectively attacked the film crew, trying to push them away and several times pulling the video camera out of the journalist’s hands.

A report was immediately lodged with the prosecutor’s office and a criminal investigation initiated under Article 171 (obstructing a journalist in carrying out his or her work).  It was reported on 7 December that one of Medvedchuk’s guards had been informed that he was under suspicion.

An hour before the Skhemy report on their investigation and its obstruction was due to be broadcast, they received a warning from Medvedchuk’s lawyers of criminal liability if the program went to air.  They were accused of ‘provocation’ and of interfering in the private life of Medvedchuk and his family.

A day earlier, the journalists had sent a request for information to Medvedchuk.  They invited him to comment on the actions of his security guards, and also to explain whether his visit to Sochi on 7 November had been private or official, and whether it was linked with his role in the humanitarian working group within the Tripartite contact group.

The response from Medvedchuk’s lawyers came only an hour before the broadcast when it would have been technically difficult to stop it.

Despite the serious threats issued by the lawyers, it is also difficult to see any grounds for cancelling the broadcast.

The lawyers cite current legislation which prohibits the gathering, possession or use of confidential information without the person’s agreement.

Natalya Sedletska, Chief Editor of the Skhemy program, dismissed the argument about ‘confidential information’.  She argued that Medvedchuk is a public figure taking an active part in Ukraine’s socio-political life and is also involved in the Minsk Agreement negotiations.  He can therefore hardly expect to be viewed as a private individual.

It was also of public relevance that Medvedchuk appeared to be using a privilege he has been afforded because of his public role in the Minsk negotiations for his own business interests.

His lawyers did, nonetheless, carry through their threat and applied to the Pechersky District Court in Kyiv to oblige the National Police to lodge a criminal investigation over supposed infringement of their client’s privacy.   Why the court allowed the application is unclear, but the police initiated the proceedings on 8 March.  It remains to be seen whether any actual ‘investigation’ is carried out. Serdletska is quite clear that the Skhemy journalists “did not just have the total right to do the filming.  They were carrying out their direct journalist duty, namely to record facts which could indicate Medvedchuk’s abuse of his position for personal objectives.”.

It is extremely likely that the European Court of Human Rights would agree with the journalists, and much to be hoped that this extraordinary criminal investigation dies a swift death.