Ukrainian works of literature and history banned as ‘extremist’ in Russian occupied Luhansk oblast Ukrainian political prisoner’s sentence increased for contempt of Russian kangaroo court Imprisoned Crimean artist faces ‘terrorism’ charges for protesting Russia"s war against UkraineThe KHPG receives half of Memorial’s Nobel, and will give the money to the victims of Russia’s invasion of Ukraine‘In Sloviansk, we watched out of the window as people held up the train tracks with crowbars so we could pass through’ Despite Russia admitting to terrorism against Ukraine, OSCE will not expel it Genocide and the acts defined by that crime: Some thoughtsRussian invaders install terror methods of censorship in occupied Zaporizhzhia oblast‘There was a human being, and the body was torn apart in an instant’ — a Mariupol graduate who went through hellYoung Crimean sentenced to 3 years after ‘confession’ almost certainly extracted through torture UN Report: Russia used civilians as human shields and carried out summary executions including of a 14-year-old ‘They were trying to kill me, but I wasn"t killed.’ — a story of a woman who saw the airstrike on the Drama Theater in MariupolRussian invaders remove Ukrainian language and literature from schools Conflicting values and conflicting narratives: the case of Russia’s war on UkraineSavage sentences in Russia’s religious persecution and plunder in occupied Crimea “He lay on the sidewalk, naming towns and cities in Ukraine”. A digest of anti-war activities in Russia, 23-29 JulyDirector of Amnesty International in Ukraine resigns in protest calling controversial Amnesty press release "a tool of Russian propaganda’ The application practice of Article 391 of the Criminal Code of Ukraine proves that this Article should be canceled“Let’s Fight the Propaganda Together” Anti-war Activities in Russia, 9-16 July 2022Mock executions used to fabricate Russia"s revenge ‘trial’ of Crimean Tatar leader Nariman Dzhelyal
• Topics / Politics and human rights 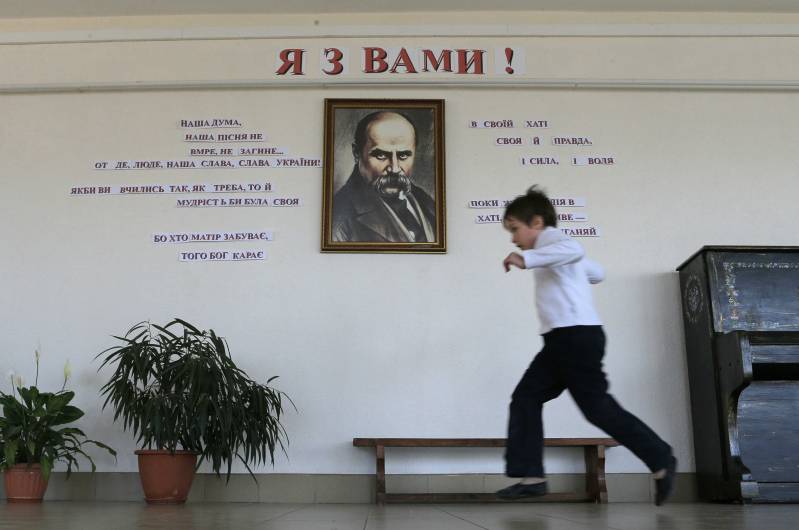 A pupil runs by a portrait of Ukrainian poet Taras Shevchenko at a local school in Simferopol, April 10, 2014. Natalia Rudenko’s ears were still ringing from being shouted at by a father demanding that the Ukrainian-language school she has run for 17 years in Crimea’s capital now teach in Russian when local officials turned up at her office to dismiss her. Their message: Rudenko and her school dedicated to sending students to Ukrainian universities no longer have a place in a society that voted to secede from Ukraine and join Russia last month after Moscow deployed troops across the Black Sea peninsula. Picture taken April 10, 2014. REUTERS/Maxim Shemetov

On February 28, Ukraine’s Constitutional Court ruled the bill "On the principles of the state language policy” unconstitutional and rendered it invalid. The law in question, adopted back in 2012 and known as the “Kivalov-Kolesnichenko language law,” granted Russian the status of a “regional language.” It was precisely the abolition of this law by the Verkhovna Rada on February 23, 2014, right after then-President Viktor Yanukovych fled the country, that Russia saw as an aggressive gesture against the “Russian-speaking population” of Ukraine and later used as a pretext to justify the annexation of Crimea and military aggression in the Donbas.

However, neither then-acting President Oleksandr Turchynov nor the subsequent president, Petro Poroshenko, signed or vetoed the law abolishing the Kivalov-Kolesnichenko language law. This means it was still in force until last month.

Unsurprisingly, there are several misconceptions surrounding this law.

What was in the Kivalov-Kolesnichenko language law? The law kept Ukrainian as the state language, yet considerably expanded the use of regional languages, should the native speakers of these languages constitute at least 10 percent of the population of a region. The law embraced eighteen languages but was clearly directed at Russian, as few of the other languages met the 10 percent threshold in any region.

Which regions fell within the law’s scope of action? After the law was passed, Russian became an official regional language in thirteen of Ukraine’s twenty-seven administrative units: Kyiv, the Autonomous Republic of Crimea, and Donetsk, Luhansk, Dnipropetrovsk, Zaporizhia, Odesa, Kherson, Mykolayiv, Kharkiv, Sumy, and Chernihiv Oblasts.

What was the response to the Kivalov-Kolesnichenko law in 2012? The law resulted in a heated public discussion. There was political opposition, and citizens and much of the expert community spoke against the law. To many, the law was a political gesture aimed at dividing Ukrainian society. Those in opposition argued that the law should have been based on the will of the people rather than imposed in a top-down manner; they also pointed out that the threshold for a language’s special status should have been 50 percent of a region’s population, not 10 percent. Given a 50 percent threshold, Russian would have qualified in only Crimea and Donetsk and Luhansk regions.

None of the language institutions of the National Academy of Sciences supported the law. The Ministry of Finance stated that it would cost between $1.5 and $2.1 billion annually to implement the law and did not support its adoption. Internationally, the Venice Commission stated that the draft law failed to ensure a balance between the use of the state language as a consolidating factor for society, and the protection of minority languages. Freedom House listed Ukraine among the states that saw the biggest drop in democracy-related indicators in 2008-2012 and named the adoption of the language law as a key reason.

Why was the law recognized as unconstitutional in February 2018? The Constitutional Court of Ukraine was supposed to consider whether the law in question complied with the constitution back in November 2016. However, the court suspended considering the case. Finally, last month, the Constitutional Court ruled the law unconstitutional because of systematic procedural violations during its adoption: the draft law was not presented for the second reading in the form of a comparison table, as required by law, and was not discussed in the second reading. Additionally, the amendments and suggestions submitted by MPs were not considered, and some MPs whose votes were counted were not even present in the session hall while the law was being considered.

What’s next? Parliament now has to pass a new law on the official state language. So far, draft law 5670-D, co-authored by seventy-six MPs, has received the highest support from civil society and policymakers. This law regulates only the use of the state language (Ukrainian) and does not apply to minority languages, as there will be a separate law for that. The law does not apply to private communication and religious rites; therefore, not much will change for the average citizen. But it requires candidates for state office, teachers, and medical staff to have good command of the state language, and regulates the use of the state language in state bodies and in public spheres of life, such as advertising, the mass media, education, science, and cultural activities.

What language dominates in Ukraine? While 68 percent of Ukrainians consider Ukrainian their mother tongue, only 50 percent speak it at home, and only 39 percent use it at work. Thus, there is little room for Ukrainian in the public domain. Several laws aimed to sustain Ukrainian were adopted in 2016-2017, including the law introducing language quotas in the media. For example, the Rada introduced a minimum 75 percent quota for Ukrainian-language shows on television. However, the legislation is imperfect, and the actual share of Ukrainian-language content on TV is only 39 percent. The rest is mostly in Russian.

Will the “language issue” mobilize the pro-Russian electorate? Opinion polls conducted by KMIS, Sociological Group Rating, and GfK Ukraine in 2016-2017 demonstrate that the status of the Russian language is important to just one percent of respondents. KMIS research in May 2017 shows that the share does not exceed three percent even in eastern regions.

Meanwhile, the same research shows that 64 percent of citizens think the state should support the Ukrainian language above all. Respondents in the eastern and southern parts of the country (35 and 38 percent respectively) also named state support to Ukrainian language as a top priority.

Tetyana Ogarkova is a foreign outreach coordinator with the Ukraine Crisis Media Center.