Sinister attempt in Ukraine to arrest / abduct opposition Azerbaijani journalist Fikret HuseynliAzerbaijan opposition blogger illegally deported from Ukraine despite ECHR rulingPetition regarding the ongoing failure to allow Azerbaijani journalist Fikret Huseynli to leave UkraineHow can Russian prison head suspected of savage torture and killing prisoners receive Ukrainian citizenship?Italy detains Ukrainian theatre director who left Russia in 2014 in protest at its aggression against Ukraine Hard-hitting Ukrainian journalist leaves Russia after accusation of ‘incitement to enmity against Russians"New charges in Russia"s revenge persecution of Crimean Tatar Mejlis leader Nariman Dzhelyal From Russia with torture : Vitaly Vlasov and other FSB perpetrators in occupied CrimeaRemember 16-year-old Stepan Chubenko and how Russia protected his Donbas militant torturers and killers Belarusian activist threatened with deportation from Ukraine for criticizing the police Russia’s remake trial of Crimean Tatar Mejlis leader provides evidence for international courts Will anyone answer for the killings on Maidan?Ukraine takes vital step towards trial in absentia of suspected Maidan mass killersTrial of Crimean Tatar Mejlis leader exposes Russian lies about invasion of CrimeaUkraine was supposed to help Russia persecute Crimean Tatar leader Mustafa DzhemilevRussia has no problem with the torture and killing of a 16-year-old Ukrainian schoolboyAttempt on the life of ex-hostage tortured for her pro-Ukraine stand in Russian proxy Donetsk ‘republic’Russia protects and gives lucrative employment to torturer and killer of Ukrainian schoolboyOpposition journalist facing political persecution is in danger of extradition from Ukraine to KazakhstanRussia’s most toxic ‘Odesa Massacre’ lie and the help Ukraine is giving it
• Topics / Freedom of expression
• Topics / On refugees 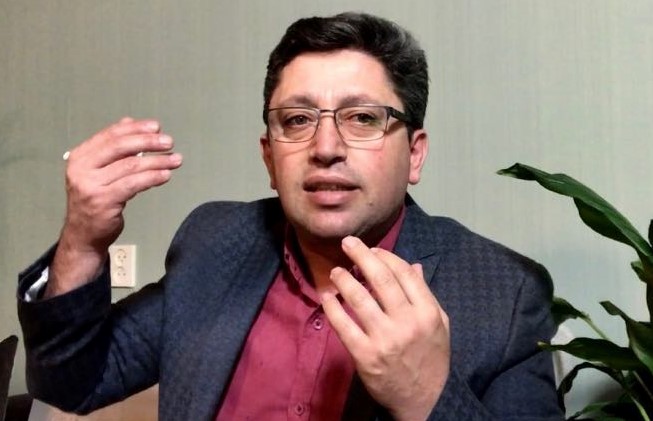 It is exactly five months since Huseynli was first detained at a Kyiv airport as he was trying to leave Ukraine.  There was an excuse, back on 14 October 2017, for detaining him, as Azerbaijan had issued an Interpol Red Notice which all countries within the Interpol system should take notice of.

There is no excuse now.  Interpol removed the Red Notice back in November, and the Ukrainian authorities are now well aware that Huseynli received political asylum in Holland after leaving Azerbaijan 10 years ago.  He now even has Dutch citizenship.

There is simply no question of Ukraine’s Prosecutor General deciding to override the decision taking by the authorities of a European Union country that Huseynli was a political refugee.

Huseynli was initially reminded in custody pending the result of the extradition check, but was released two weeks later after MP Mykola Knyazhytsky and human rights activist Boris Zakharov offered to act as guarantors.  Huseynli was, however, forced to give up his passport, and is now unable to leave Ukraine.  He is also seriously hampered on a day to day basis since even finding a flat is difficult without your passport.

The situation became particularly alarming after an abduction attempt on 5 March.  Huseynli has explained that he was aware of being followed all that day, and was approached by four men as he returned to the flat in the late evening.  They claimed that he was on the Interpol database, and that they had to take him to the police station and that there was a ruling on extraditing him to Azerbaijan.

Some of them spoke Azeri, and they began using force when he refused to go with them.  He sent the Committee to Protect Journalists [CPJ] photos of his injuries, and explained that they had hit him and knocked him to the floor, bruising his legs and throat, and breaking his dental bridge.

Neighbours, thankfully, intervened and called the landlord, after which the men backed off and he was able to escape.

He is now understandably in grave fear that the next time they come he won’t be so fortunate.

In separate statements, CPJ and Ukrainian media and human rights organizations have demanded that the Ukrainian Prosecutor General concludes the so-called ‘extradition check’, gives Huseynli his passport back and allows him to return to Holland.

CPJ stresses that Kyiv “must not be complicit with Azerbaijan authorities’ persecution of critics beyond its borders” and points out that Huseynli has covered the activities of the Azerbaijani opposition in exile and suspected corruption in the Azerbaijani government. He has also criticized Azerbaijan’s president, Ilham Aliyev.

Huseynli is now working for the opposition satellite TV channel Turan, and had come to Ukraine to open a Ukrainian office for the channel, shortly before being detained.

What is going on?

When challenged over the situation after Interpol removed Huseynli’s name from the wanted list, Ukraine’s Prosecutor  General’s Office asserted that they had received a second letter from Azerbaijan with further details of the charges they want to bring against him, and that a ‘check’ was underway.

The charges are of ‘illegally crossing the border’, fraud and forgery.  If the details reported are correct, then at least one of the charges is of having organized emigration of Azerbaijanis in order to receive refugee status abroad.  This would be for the country of destination to object to, not Azerbaijan.

Even if any of this information is new, it should be provided to Holland, not to Ukraine.

There are also strong grounds for doubting that Azerbaijan has provided new information.  The letter from the Azerbaijan Prosecutor General to his Ukrainian counterpart, Yury Lutsenko from 18 January 2018 essentially cites political grounds for Ukraine to collaborate with Azerbaijan in forcibly returning Huseynli.  It claims that he had come to Ukraine to destabilize the country, that he was taking part in political rallies, etc. which are supposedly against Ukraine’s national interests. The letter even  adds a photo showing Huseynli with Mikheil Saakashvili, ex-Georgian President, former governor of the Odesa oblast and fierce critic of Ukraine’s President Petro Poroshenko.

The message from Azerbaijan’s Prosecutor General is clear:  this is our ‘enemy’ and yours, so hand him over.

The message that Ukraine is giving democratic countries by holding Huseynli, journalist Zhanara Akhmet from Kazakhstan and Uzbek journalist and poet Narzullo Akhunjonov hostage to suspect ‘extradition checks’ is devastating.