Political Shenanigans to the End: Ukraine’s Parliament elects their own MP as ‘Human Rights Ombudsman’ 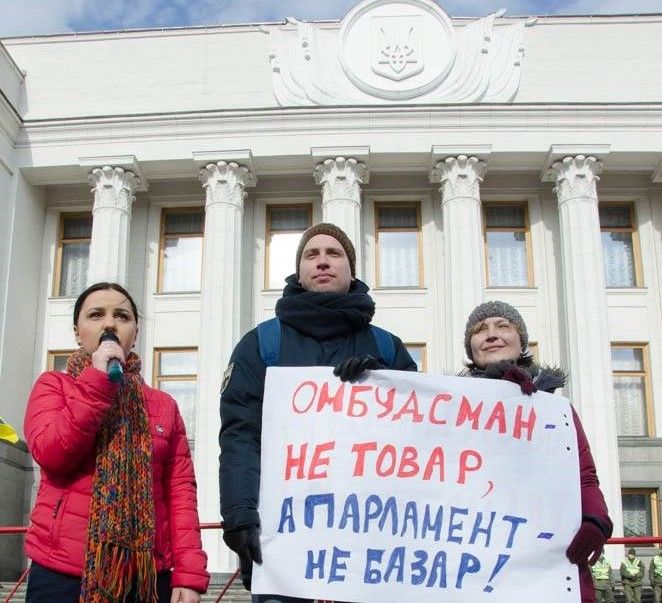 “The Ombudsman is not a commodity and parliament is not a bazaar!”.  That was the message from Ukrainian rights activists this week, and one that Ukraine’s parliamentarians have now ignored.  On March 15, a politician was elected to the post by her colleagues through procedure in open breach of the Law on the Human Rights Ombudsperson.  Ludmila Denisova has announced that she will not take office until she has ceased to be an MP and member of the People’s Front, but this cannot change a situation which has gravely undermined the most important human rights institution in Ukraine.  This is both because the appointment was openly viewed as part of political quotas for the different coalition partners in the Verkhovna Rada and because of the shenanigans used to obtain the vote.

Valeria Lutkovska’s term as Parliamentary Commissioner on Human Rights (Ombudsman) came to an end on April 28, 2017, and a new Ombudsman needed to be chosen or Lutkovska reappointed.  A time limit of 20 days is set aside for this in the Law on the Human Rights Ombudsman.

It rapidly became clear that MPs were choosing ‘their own’ candidates on party lines, with two of the three candidates proposed being current MPs.   While Denisova was from the People’s Front, Serhiy Alexeev is a member of the Bloc of Petro Poroshenko.  A third candidate – Andriy Mamalyta – was proposed by Oleh Lyashko, leader of the Radical Party.

While the Law prohibits the Ombudsman from being an MP or holding executive office at the same time, it does not specifically prevent an MP from being elected, as long as they resign from their seat.

Concern was expressed both by major Ukrainian human rights NGOs, and in appeals from 40 Ombudsmen, Freedom House and others at the apparent politicizing of this post.  All stressed the need for the person to be independent and the inadmissibility of parliamentarians treating this post as part of their political quota within the coalition.

The vote was scheduled for June 6, but did not take place, officially because the National Agency on Preventing Corruption had not finished its special checks.  The unofficial explanation was that Denisova did not have enough votes to win.

The 20-day term stipulated by the law ended that day.

Human rights NGOs called then, and have continued to demand that a new 20-day term be reset, together with fundamental changes in the entire selection procedure bringing it into compliance with the UN Paris Principles.  The latter stress that candidates “ shall be established in accordance with a procedure which affords all necessary guarantees to ensure the pluralist representation of the social forces (of civilian society) involved in the protection and promotion of human rights… “

The fact that a person has formally shed his or her political affiliation can only improve appearances, but does not change the essential situation.  The Ombudsman has wide powers in Ukraine and really is the last avenue for ordinary citizens to approach when their rights are violated.  They must not be viewed as politically engaged, and their election should not have been supported or opposed in dependence of an MP’s political faction.

It had seemed that the cynical disregard for fundamental principles could not get worse, but that proved not to be the case.

An article was added to the already controversial Law on the Constitutional Court, with this allowing for the Ombudsman to be elected by open vote in parliament.  The secret vote, envisaged in the Law on the Ombudsman has a major advantage for those wanting a real vote, since the leaders of factions cannot see, and potentially punish, their MPs if they vote ‘the wrong way’.

The second reading for this bill took place on July 13, 2017 with one MP, Olha Chervakova proposing an amendment which would retain the secret vote for Ombudsman.  This was supported by a majority (227) of MPs.

The Verkhovna Rada Office and certain MPs, however, decided to make use of the fact that in presenting her amendment, Chervakova had got its number wrong.  This was absurd, since MPs had voted on the content of the amendment, and not its number.  It was however used by the Verkhovna Rada Office as a pretext for ignoring the majority support for the amendment.

The norm introducing an open vote for Ombudsman had thus been obtained by rigging the results of a vote in the Verkhovna Rada, and is totally illegitimate.  Crucially, it also clashes with the unequivocal requirement for a secret vote in the Law on the Ombudsman.

On the eve of the planned vote on March 15, there were calls for an open and non-political competition for the post from Ukrainian civic activists, from the Ukrainian Helsinki Human Rights Union, the Centre for Civil Liberties and other NGOs; the UN Human Rights Monitoring Mission; OSCE;  Amnesty International; Freedom House and the European Network of National Human Rights Institutions.

The open vote took place regardless, with 280 votes cast for Denisova.  Alexeev’s withdrawal from the ‘race’ an hour before the vote has meant that some of the media reports say that this was a ‘choice’ between Denisova and ‘a human rights activist’.  Had this not been a political deal clinched between political factions, there would have been no need to violate the law and ensure that each MP’s vote could be seen by the heads of their factions.

Politicians have yet again ignored civil society, the law and fundamental democratic principles, with the result casting a shadow over a vital human rights institution – and the Ukrainian parliament.