13-year sentence against Belarusian investigative journalist who helped expose crimes against Ukraine Fascism is here in Russia. Anti-war activities in Russia, 15-22 AugustOpposing the Orwellian State. Anti-war activities in Russia, 27 July-5 AugustInvaders stage fake referendum so they can accuse Ukraine of ‘invading Russia’ Chief Kremlin propagandist calls Russia’s killing of elderly civilians – Hero of Ukraine Oleksiy Vadatursky and his wife - "denazification in action"Russian prisoners offered big money and ‘amnesty’ to kill for Russia in Ukraine Russia confirms plans to annex occupied parts of Zaporizhzhia and Kherson oblastsFeminists, “Railroad Partisans” and School-Leavers Protest. A Digest of Protests in Russia, 25 June-2 July 2022 Russia instals FSB man, other Russians to ‘govern’ occupied Kherson where the population hates them“We’re not celebrating today” – digest of Russian protests (early June 2022)The letter on the attempt to remove the Ombudsman from the position – to all people concernedRussia kills at least 240 Ukrainian children, forcibly deports thousands of others Even in Russia, Putin’s ‘denazification’ claims prove no excuse for war against UkraineRussia is forcibly ‘mobilizing’ Ukrainians from occupied territory to fight its war against Ukraine Fake ‘referendums’ at gunpoint planned to try to ‘legitimize’ Russia"s invasion of Ukraine Chief Rabbi of Odesa: “Ukraine is the safest country in the world for Jews” Russia has already greatly surpassed the Nazi Third Reich by insidiously launching missile and bomb attacks on UkrainePutin ramps up aggression against Ukraine through so-called ‘Russian citizens’ in occupied Donbas Putin’s new law envisages annexing other countries" territory as grounds for Russian citizenshipOver 50% of Ukrainians willing to take up arms or otherwise resist further Russian invasion of Ukraine
• Topics / Elections 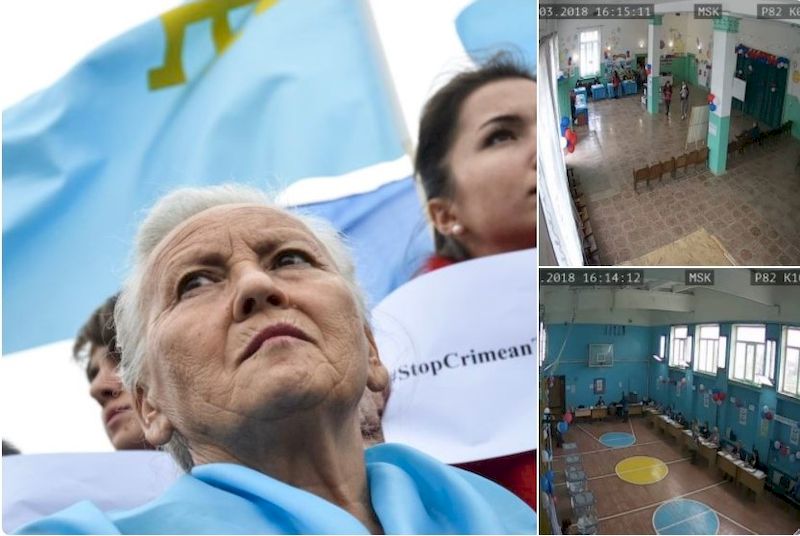 Vladimir Putin’s fourth presidential ‘election’ was moved back a week in order to coincide with the fourth anniversary of Russia’s annexation of Crimea, and the turnout on the occupied peninsula was clearly seen as significant.  Photographs from Crimean polling stations on 18 March do not tally with official reports, and certainly the vast majority of Crimean Tatars seem to have boycotted the event. This is despite four years bitter experience of the repressive measures they are likely to face for their courageous resistance.

Repression against the Mejlis [representative assembly] of the Crimean Tatar People began soon after the Mejlis called on all Crimeans to boycott Russia’s pseudo referendum on 16 March 2014, with two of its leaders - Mustafa Dzhemilev and the current Head Refat Chubarov – banned from their homeland.  A further wave of repression came swiftly after the Mejlis also called for a boycott of Russian-controlled elections in September 2014.  Mejlis Deputy Head Akhtem Chiygoz was imprisoned for almost three years and the Mejlis itself banned.   The Mejlis issued a statement on 12 March, stressing that any Russian elections are illegal on occupied territory, and that taking part in them is in violation of Ukrainian legislation.

Russia is continuing to ignore the order from the UN International Court of Justice to withdraw this ban on the self-governing body of the main indigenous people of Crimea, and all members of the Mejlis still in Crimea face the threat of persecution.

This did not stop Nariman Dzhelyal, who was appointed First Deputy Head back in 2015, after Chiygoz’ arrest, from issuing a moving video address to his compatriots.  In it he stressed that the right to take part – or not – in elections is a fundamental human right, and that each person must make his or her own choice.

Nor is it important what you do at the polling station.  Whether you tick a box or, as some are planning, you spoil the ballot paper, by coming to the polling station, you will already support the killers of Reshat Ametov; the abductors of Ervin Ibragimov; those who carry out the multiple cases of persecution and of torture.  You will give them the licence to continue their dirty and illegal work.  You will hand them your Crimea, free and prosperous Crimea which now neither you, nor your children and children will see.  Because they will be trained to live without freedom from childhood.

Most of you know what to do but you are frightened.  Admit to your fears and then you will be able to overcome them.  Do not give way to blackmail and do not let yourselves be deceived.  Make your choice freedom.  I have already made mine”.

Nariman Dzhelyal is by no means the only Crimean to have publicly spoken out, in the full knowledge that the FSB follow every word they speak or write on social media.

After the event had ended on 18 March, Dzhelyal wrote that he was “totally uninterested in the turnout and how and who will be punished for it.  It is important that among my compatriots, there were enough of those who found the strength to resist the threats and pressure”.

He goes on, however, to speak of the likely backlash.

“Get ready to uphold your right still further because there will be those who try to take revenge for our will.  And they are relying on us “not wanting trouble” and being silent. Make audio or video recordings of all threats and write complaints to the prosecutor’s office and Central Election Commission.”

It is likely that the occupation regime will avoid direct consequences as these can only help highlight the evident rigging of the official turnout results.  There are plenty of other forms of repression, as the last four years have, all too often, shown.

Among the Crimean Tatars arrested during the last six months have been a number of men active in the Crimea Solidarity movement or people who have addressed international bodies telling them about repression in Crimea.  From the outset, the Russian occupation regime targeted those who remained loyal to Ukraine and all who hold ‘dissident’ views or beliefs.

There are too many victims to recall them all here, but please remember the Kremlin’s Crimean political prisoners.  The links below normally have addresses to write to the men, and in all cases it is very important that information about them is passed to politicians and the media in your country.

Jailed for three and a half years (reduced on 16 March by only two months) on grossly falsified charges, essentially for the Ukrainian flag he refused to remove from his home.

25 men, most Crimean Tatar, are facing huge sentences for unproven ‘involvement’ in Hizb ut-Tahrir, a peaceful pan-Islamist organization which is legal in Ukraine.  A number of them are human rights or civic activists, including from the initiative Crimea Solidarity.