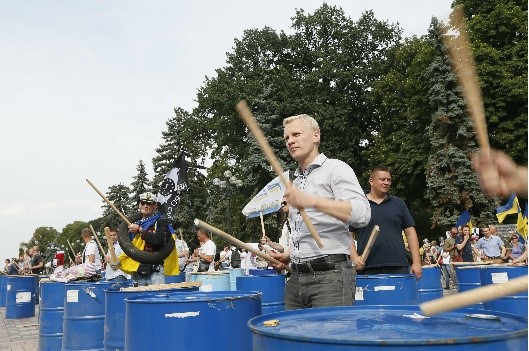 Vitaliy Shabunin, head of the Anti-Corruption Action Center, and other activists demand to deprive several Ukrainian lawmakers, suspected of corruption by the General Prosecutor’s Office, of parliamentary immunity during a rally near the building of parliament in Kyiv, Ukraine July 11, 2017. REUTERS/Valentyn Ogirenko

There has been an ominous change in the state of freedom of association in Ukraine over the last year.

One of Ukraine’s leading activists, Vitaliy Shabunin of the Anti-Corruption Action Center (AntAC), is facing trial on criminal charges and could receive up to five years in prison. The charges are at best exaggerated and at worst politically motivated. Civil society argues that the facts of Shabunin’s incident in which he punched a provocateur posing as a journalist were intentionally distorted so that authorities could bring more severe charges against him.

YouControl, a platform that provides free access to government data registers used by anti-corruption activists and investigative journalists, was accused of trading classified information, among other charges. Over ninety Ukrainian organizations wrote a cease-and-desist letter to government authorities, requesting that they stop harassing YouControl. The SBU recently dropped the case because of an “absence of proof,” but the decision does not explicitly state that YouControl’s founder and his employees are not guilty. Similarly, three activists from the Auto-Maidan civil society group currently face criminal proceedings for throwing eggs at lawmaker Oleh Barna. Sergei Hadzhynov, one of Auto-Maidan’s leaders, believes this to be part of a larger political vendetta. If convicted, Hadzhynov and his colleagues could face four to seven years in jail.

Many key civic actors argue that the actions against AntAC, YouControl, Auto-Maidan, and others are not isolated incidents, but attempts on the part of President Petro Poroshenko to muzzle key voices of dissent in advance of the 2019 presidential and parliamentary elections. At the heart of the government’s apparent campaign against civil society are two draft laws that the Poroshenko administration submitted to the Verkhovna Rada in July 2017: a draft amendment to the tax code (No. 6675) and a draft amendment to the law on public associations (No. 6674). Both measures would require nongovernmental organizations to submit detailed financial reports identifying their own full-time and part-time staff as well as any groups or individuals they work with or fund. NGOs that fail to comply with these onerous reporting requirements could face heavy fines, lose their nonprofit status, or even be liquidated.

The draft laws were hastily introduced by the presidential administration with limited consultations with civil society actors. Bankova invited a few select NGOs to the table and released some photos from the meeting to make the process appear legitimate.

A number of political parties—particularly the Petro Poroshenko Bloc–Solidarity (BPP) and the People’s Front (NF)—have rallied around the presidential administration’s efforts and vocally promoted the draft laws. The drafts are facing review in the Rada and have not been discussed yet; however, many are concerned that they will pass if civil society, parliamentarians, and the international community do not continue to put pressure on the government. A small group of lawmakers, including “Euro Optimist” MPs Serhiy Leshchenko, Svitlana Zalishchuk, and Mustafa Nayyem, as well as several representatives from the Lviv-based Samopomich Party, oppose the draft laws, but pushing back against BPP and NF remains a challenge.

The draft laws would replace a law adopted by the Rada in early 2017, which requires anti-corruption NGOs to publicly submit income and asset e-declarations for all employees, board members, and contractors—including workers who clean the office and deliver coffee or water—putting them under the same level of scrutiny as public officials. The situation presents civil society groups with a set of unattractive choices: live with the current legal framework requiring intrusive e-declarations, submit to the host of new reporting rules under the draft laws instead, or risk serious financial and legal consequences by refusing to comply altogether.

Oleksandra Ustinova, an expert at AntAC, predicts that the current requirements will stay in place. The deadline to disclose e-declarations is April 1. Even still, the draft laws will be up for discussion in the Rada next month, and if they pass, Ustinova thinks it’s likely that the authorities could potentially use the information collected from the e-declarations against activists to initiate more harassment against them.

Similar provisions have been used in other countries in the region—including authoritarian states like Kazakhstan and Russia, and more recently, Hungary and Poland—to put pressure on independent civic groups. Tetiana Pechonchyk, executive director of the Human Rights Information Center and a leading Ukrainian activist, went as far to say that these draft laws directly draw language from existing legislation in Kazakhstan and Russia. European institutions have criticized Ukraine’s legislation through careful analysis and statements, as well as bilateral meetings with the Poroshenko administration and Rada members. Both draft laws were evaluated by the Council of Europe’s Venice Commission, and the preliminary analysis is extremely critical. In a joint statement with the OSCE/ODIHR, the Commission indicated that the “stringent financial reporting and disclosure requirements for public activists, coupled with severe sanctions, are likely to have a ‘chilling effect’ on civil society in Ukraine and should be removed in their entirety or significantly narrowed down.” Moreover, the Commission indicated that these requirements will directly undermine freedom of association in Ukraine. The Commission’s entire analysis on these requirements and the draft laws will be released today. The Commission has a narrow window of opportunity in which to pressure the Ukrainian government to drop the measures, as the deadline for submitting e-declarations goes into effect on April 1.

Allowing the status quo to stand or enacting the two draft laws would be destructive for Ukraine, marking a reversal of the important democratic progress that Ukraine has made since 2014. Civil society in Ukraine and the international community must continue to emphasize that the current law and the pending legislation could directly undermine freedom of association and ultimately Ukrainian democracy. Instead, Kyiv should allow its outstanding civic activists to carry on unhindered, standing as a positive example for the rest of the region.

Gina S. Lentine is the Program Officer for Ukraine and Moldova at Freedom House in Washington, DC. She tweets @ginayogina.