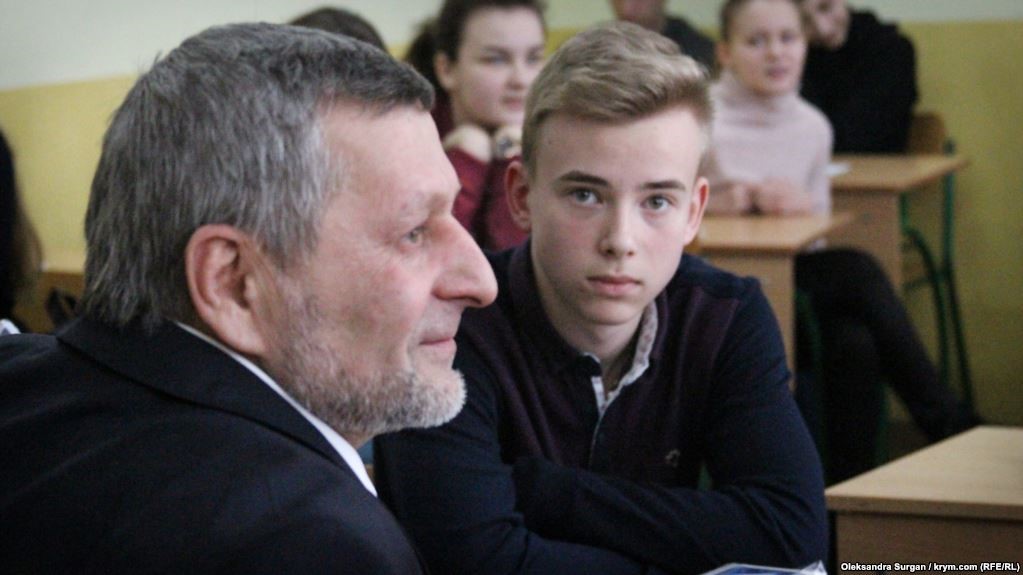 Just how much our letters mean to Ukrainians held in Russian captivity became movingly clear during a very special meeting on 19 March between former political prisoner Akhtem Chiygoz and 14-year-old Bohdan Fenechok.  “Where is my friend?”, Chiygoz asked, after entering a classroom in Lviv.  Bohdan stepped forward and the two embraced  (see the video)

The Deputy Head of the Crimean Tatar Mejlis spent almost three years imprisoned in Russian-occupied Crimea on quite astoundingly lawless charges.  He recalls that he was seldom passed letters, however his wife did manage to bring several to the prison in Simferopol.  One of these was from Bohdan, who began his letter with the words Dear Friend”, explaining that he didn’t know what form of address he should use.

The letter was short.  It is always hard to write to political prisoners and for Bohdan it was also difficult to write in Russian.  In the letter, he says that “if my mistakes in Russian make you smile, I will be very pleased”, and hopes that Akhtem Chiygoz will soon return home.  He writes also of his wish that one day they can meet so that Bohdan can “say thank you for everything”.

During an interview given in Kyiv after his unexpected release in October 2017, Chiygoz spoke of how this had been a very tough time for him.  “The letter gave me a powerful impulse to struggle on,” he said, and expressed the hope that he could meet the young man one day.  He has since told Krym.Realii that the letter arrived after he had been sentenced to eight years and couldn’t see any hope.

“Then you open the envelope and understand that a child has written this.  A child, you understand?  Well how can you give up?  Giving up would be the same as letting him down”.

It was thanks to another former political prisoner that the meeting became possible.  As reported, Yury Yatsenko was released in May 2015  after being held and tortured in Russian captivity.

Yatsenko had run a campaign in schools encouraging students to write to political prisoners held in occupied Crimea or in Russia.  It was from Lviv School No. 2 that Bohdan sent his letter, without giving his full name or address.  He explains that he hadn’t believed that the letter would get there, and wasn’t even sure who he was writing to, but he felt the need to express his heartfelt support. 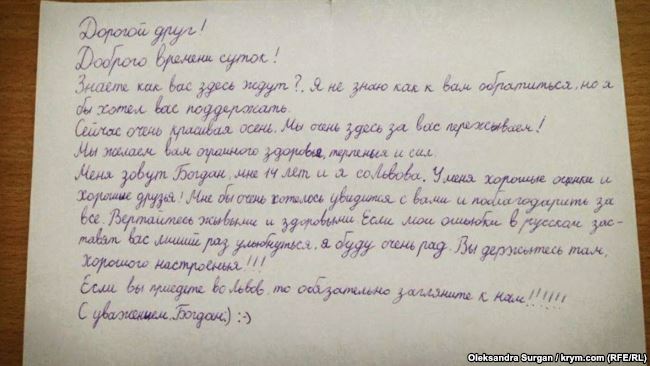 Akhtem Chiygoz is not the only political prisoner who has stressed the enormous importance of receiving letters.  Yevhen Panov has been held prisoner now since August 2016, and says that letters make him feel ‘charged with energy’  (his letter can be read here).

The Russian FSB are holding at least 64 Ukrainians prisoner on absurd charges which do not bear scrutiny.  It is precisely for this reason that the pre-trial detention is usually dragged out, with prisoners placed under heavy pressure to ‘confess’ to non-existent crimes.  They try to convince the men that their families and Ukraine have forgotten about them, and that they are quite alone.

For that reason alone, it is vital that they receive letters, however they also provide an important message to the Kremlin that Russia’s actions, its persecution of the men is under scrutiny.  This helps to keep them safe.

See the bottom for a list of the prisoners (press the links for addresses to write to.

Akhtem Chiygoz was sentenced to eight years’ imprisonment on September 12, 2017, after having been held in appalling conditions in the Simferopol SIZO [remand prison] since January 29, 2015.  He had not been allowed to attend his own trial, and was also prevented from attending his own mother’s funeral, having been taken to see her before her death for a mere ten minutes.

The charges were of pure legal nihilism, since they pertained to a demonstration that took place on February 26, 2014, on Ukrainian territory and under Ukrainian law.  Even had Russia had jurisdiction, there would have still been absolutely no grounds to the charge of ‘organizing a mass riot’, since there had been no mass riot, and Chiygoz had not, in any case, been the organizer of the demonstration.

This so-called ’26 February’ case was openly anti-Crimean Tatar and seemed a clear act of revenge against the Mejlis which had blocked Russia’s attempt to carry off a coup without the use of Russian forces.  (Details here and  here. ).  Chiygoz was released, together with another persecuted Crimean Tatar Mejlis leader Ilmi Umerov, on October 25, 2017.  This was seemingly as part of an exchange agreement according to which Turkey returned two suspected Russian killers held on charges of involvement in a Russian state-sponsored killing. Two other men – Ali Asanov and Mustafa Degermendzhy – are now under house arrest on the same surreal charges.  Both spent almost two years in custody, almost certainly because of their refusal to give false testimony against Chiygoz.

Information about the Kremlin’s hostages – press the links for both information and addresses.  If people are held prisoner in occupied Crimea, please send letters c/o:

[This is only an address for passing on letters, and since the Mejlis is persecuted in occupied Crimea, should not be mentioned on the letter itself]/