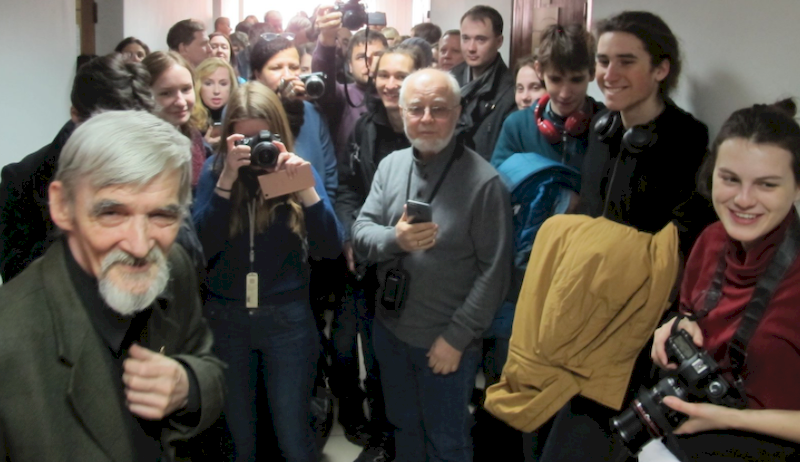 Verdict is due on Thursday, 5 April in the trial of Yuri Dmitriev, a world-renowned Russian historian and head of the Karelia branch of the Memorial Society. The prosecution has demanded a 9-year sentence, despite even the expert assessments ordered by the court dismissing the charges. This deeply flawed case differs from many politically-motivated trials in that the outcome is not clear.  A guilty verdict, however, will signal a new descent for Russia into its Soviet past.

It is thanks to Yuri Dmitriev that very many Ukrainians, Russians and representatives of other nationalities learned of the fate of their parents or grandparents arrested during Stalin’s Terror.  It was he and his colleagues from the Karelia Memorial Society who discovered the mass graves at Sandarmokh where thousands were murdered during the Terror, including 1,111 prisoners of the Solovki Labour Camp.

Memorial, and Dmitriev have also concentrated in recent years on exposing the perpetrators of the Terror, not only their victims.  It has been widely assumed, both in Russia and beyond, that Dmitriev’s arrest and the obvious efforts to use it as a way of discrediting Memorial were linked with the above-mentioned work.

Dmitriev was arrested on 13 December 2016 and remanded in custody.  He was charged with ‘preparing pornography involving a minor’ (Article 242.2 of Russia’s criminal code) and ‘depraved actions with respect to a child under the age of 11’ (Article 135).  Both these apparently serious charges pertained solely to a folder filed on his computer, and never ‘circulated’, which contained 114 photos of his adopted daughter Natasha.  The little girl had been painfully thin and in poor health when he and his former wife took her from the children’s home when she was three, and the authorities had themselves advised him to monitor her development.  Each of the photos, taken between 2008 and 2015 recorded her weight and height.

Askerova then demanded yet another assessment of the photos, as well as tests in a psychiatric institute of Dmitriev himself. She also sought a further 3-month extension of his detention.

It was at this point that the outcome of this trial became somewhat less predictable.  The judge agreed to send Dmitriev to the Serbsky Institute for the said examinations, but only extended the detention for one month.

A month later, on February 27, Dmitriev’s lawyer Viktor Anufriev reported from the Petrozavodsk Court that the Serbsky Institute had also found nothing wrong with Dmitriev.  It had directly stated that Dmitriev is not a paedophile, and that the photos of his adopted daughter were taken for a different purpose.  He had not done anything that was harmful for the little girl,”

With all the evidence so heavily against the prosecution, and Dmitriev himself having been freed, it came as a shock when Askerova demanded a 9-year maximum security prison sentence.

Over a hundred people, including well-known human rights defenders, were at the court on 27 March, when Dmitriev gave his final address.  The hearings have been behind closed doors on the grounds that the photos are of a child, however Anufriev and Dmitriev himself later explained what had been said.  Dmitriev had reiterated his denial of the charges, and had brought a letter from Natasha to her beloved Papa, in which she said how much she loved and missed him.

Anufriev explained that the letter had been cited because of the attempts to push the idea that Dmitriev had psychologically damaged the young girl.

Natasha was sent away immediately to a grandmother she didn’t know.  Anufriev noted that this was even despite the fact that the little girl was supposed to receive hospital treatment in Petrozavodsk.

Despite all efforts to turn her against the man she calls Papa, she had still written such a letter.

The judge Marina Nosova is now due to announce the verdict on 5 April 2018.