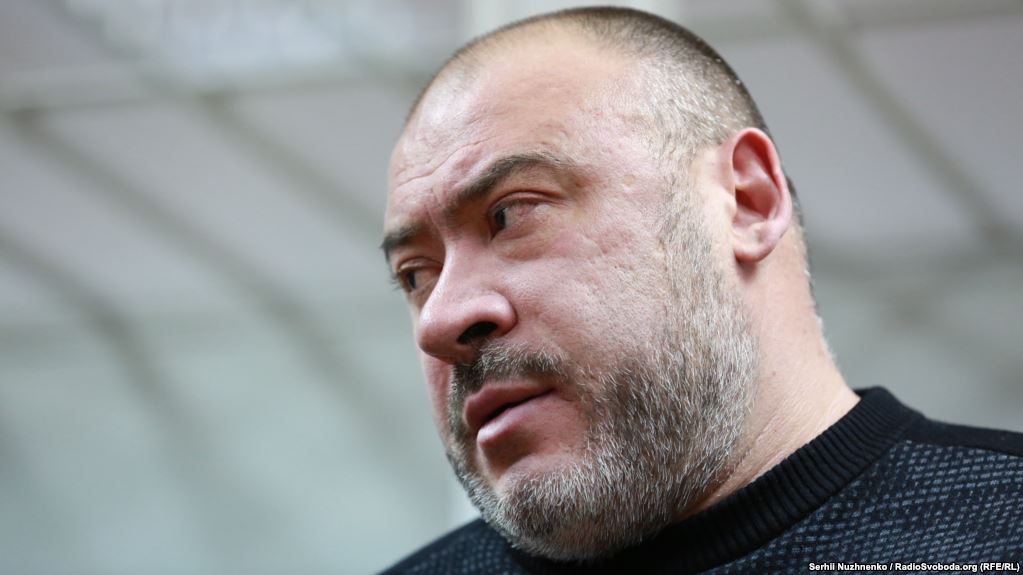 Yuri Krysin, the head of the ‘titushky’, or hired thugs involved in killings, abductions and attacks on Euromaidan activists, has been remanded in custody on charges which could carry a 10-year sentence.  The development comes three months after Krysin’s extraordinarily light four-year suspended sentence for his part in the savage beating and murder of Vesti journalist Vyacheslav Veremiy on 19 February, 2014 aroused outrage both in Ukraine and abroad.  His detention should put an end to a string of obstructions which have delayed hearings into the prosecutor’s appeal against that sentence.

It was established during that earlier trial that on February 17, 2014, Krysin had agreed, for payment of 20 thousand dollars, to collect a gang of titushky to attack Euromaidan activists. One such attack was that on Veremiy, however there were many others, and the new charges are in relation to those.

During the preliminary hearing into the new charges at the Darnytsa District Court in Kyiv on 29 March, the court ordered that the two defendants – Krysin and Serhiy Chemes – both be remanded in custody until 29 May.

The men are facing charges over four episodes.  Krysin is accused of abetting and encouraging people to abduct and torture a person on 21-22 January 2014;  of hurling explosive devices at Maidan activists’ barricades on 18 February 2014 (several hours before the killing of Veremiy); of obstructing the protests through the use of indiscriminate violence.  The fourth charge mainly concerns Chemes who is accused of having, on Krysin’s instructions, forced Veremiy to the ground and held him there until the other titushky ran up.

Krysin’s track record of keeping out of prison despite convictions for serious crimes has led many, including prosecutors investigating Maidan crimes, to believe that he has influential connections, including within the police force.

The Krysin trial, and specifically the way in which the charges became so diluted, was given particular attention in the last Office of the United Nations High Commissioner for Human Rights Report on Ukraine.  They noted with concern “what appears to be special treatment afforded to the ‘titushky, resulting in denial of justice to victims of their crimes”.

The details the OHCHR only briefly mentions are certainly damning.  44-year-old Krysin is believed to have been part of a criminal gang with links to Yuri Ivanyushchenko, the close associate of ex-President Viktor Yanukovych, who is suspected of having played a major role in providing the gangs of titushky who committed numerous crimes against Maidan activists.

Krysin was arrested in remanded in custody on March 29, 2014 over the Veremiy killing charges, however was released into house arrest by a Prosecutor General’s Office investigator Yevhen Kotets after Krysin, his wife and lawyer claimed that he was in danger of being killed in SIZO [the remand prison].  The ‘threats’ and elaborate extortion allegations were supposed to form the subject of a criminal investigation, however the lawyer representing Veremiy’s family constantly ran up against a brick wall when he asked for details about the ‘investigation’, and by December that year it transpired that none had been initiated.

The alleged threats were also used as an excuse to hold the court trial over Veremiy’s murder behind closed doors.  That in turn made it easier to conceal certain other worrying developments.  The most dramatic of these was the quiet disappearance of the murder charges in June 2014, with Prosecutor General’s Office [PGO] prosecutor Yevhen Krasnozhon instead initiating new proceedings in which Krysin was charged only with ‘hooliganism’.

In August that year, Krasnozhon supported Krysin’s lawyer’s application to the court to have his house arrest withdrawn. This was supposedly because Krysin had admitted guilt, had good character references and a pregnant wife and son.  At a closed court hearing on Oct 14, 2014 judge Oleh Linnyk allowed the application and released Krysin on only a signed undertaking not to abscond.

Despite public outrage, Krysin remained at liberty until his next arrest on extortion charges in May 2015.  Although he had been under a restraint order on serious criminal charges when he committed the new offences, on March 17, 2016, he was convicted of possession of ammunition and given a suspended sentence.

Although the promised criminal investigation into the alleged threats used to justify Krysin’s release from custody had never eventuated, he seems to have been under police protection when he committed his next violent crime in August 2016.

In ordinary cases, such a formidable crime record during the trial would have led to Krysin being taken back into custody, or would at least have been viewed as aggravating circumstances when passing sentence.

Not here, however.  On 22 December 2017, Judge Oleh Linnyk from the Shevchenkivsk Court in Kyiv, found Krysin guilty only of ‘hooliganism’, and cited his alleged repentance and two underage children as mitigating circumstances to justify a four-year suspended sentence with a two-year probation period.  The prosecutor had asked for a six-year real sentence.

Although Krysin did not fire the shot which killed Veremiy, he was the head of the armed ‘titushky’ gang in camouflage whom Veremiy had begun filming from a taxi.  The thugs reacted by throwing a grenade to stop the taxi and dragging him, a colleague and the driver out of the car and beating them with bats.  The ferocity of the attack on Veremiy can be clearly seen here.

The case was riddled with suspicious inaccuracies.  Veremiy’s widow pointed out, for example, that the sentence had claimed that Krysin did not have a criminal record.

Oleksiy Donsky, prosecutor from the Special Investigations Department investigating Maidan crimes, was blunt in attributing the drawn-out nature of this trial, which had benefited only Krysin, to Judge Lynnyk.   He also spoke of Krysin having people in high places providing him with protection.  It should be stressed that Maria Tomak and other human rights journalists, had identified the investigators, prosecutors, etc. involved in eyebrow-raising decisions, long before Lynnyk passed his suspended sentence. There is nothing to indicate that any investigation was carried out into their allegations.

Appeal hearings into that sentence have been constantly obstructed by Krysin or his lawyers who fail to turn up without providing valid reasons.   One such occasion was when Krysin proved to have been admitted to the children’s unit of the Heart Institute.  This had already aroused considerable scepticism, and at a later court hearing, prosecutor Donsky said that they had evidence that one of Krysin’s lawyers had arranged for his examination on that day.  Not treatment, just an examination which almost certainly did not need to clash with the court hearing.

Krysin had also sought to have the appeal hearing behind closed doors, and also demanded police protection, claiming that his life was in danger from the civic activists who turned up outside the children’s unit, the court etc.  Only the demand for police protection was granted.  Given that Krysin is now in custody, that should now be less relevant.  If, that is, this time he remains in detention.