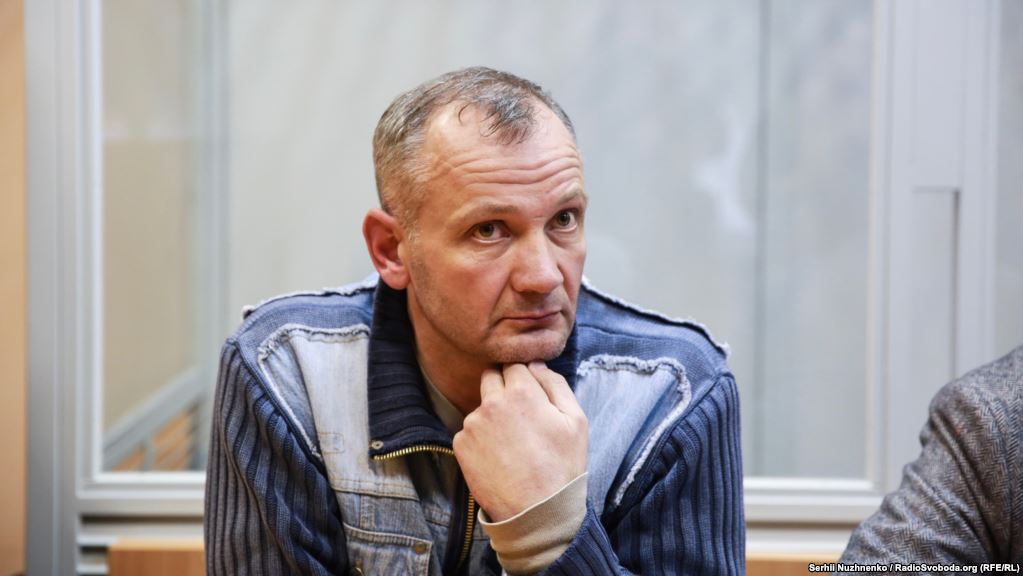 Update  In a rather controversial move, Prosecutor General Yuri Lutsenko announced on Facebook on April 4 that he disagreed with the classification of Ivan Bubenchyk’s actions made by the Special Investigations Department and that he was changing the group of prosecutors, with this to be headed by his deputy.  On 5 April, the application for Bubenchyk’s detention was withdrawn.

Ivan Bubenchyk, the Maidan activist and veteran of the war in Donbas who was reported to have told a journalist in 2016 that he had shot and killed two Berkut special purpose police officers during Euromaidan has been arrested on suspicion of two murders and one attempted murder. According to Serhiy Horbatyuk, the Head of the Special Investigations Department, Bubenchyk was detained after having constantly ignored summonses to appear as a witness.  The move is likely to stir up emotions, especially given the pitiful number of convictions over crimes against Maidan activists, but may well have been forced on the investigators given Bubenchyk’s failure to appear.

Horbatyuk explained to Radio Svoboda that his department was investigating the killing of 13 enforcement officers, as well as over 180 injuries from firearms.  He stressed that if Berkut officers had received gunshot injuries as a result of their own use of weapons or violence against somebody, and if the person had used them in an act of extreme necessity, to protect himself or someone else, then the person would not face criminal liability.  If such circumstances have not been established, then the person can expect to face charges.

Back on 19 February 2016, shortly after the publication, Horbatyuk stated that Bubenchyk had been summoned for questioning, but that he had not appeared. This has apparently continued ever since, and Bubenchyk, who is from Lviv, was finally detained in the morning of 3 April on the border with Poland.

The Pechersky District Court in Kyiv was due to decide on a preventive measure on Tuesday evening, but has put off the ruling, without specifying for how long.  Oleksiy Donsky, prosecutor from the Special Investigations Department, reiterated that Bubenchyk had been detained because he had not cooperated with the investigators.  He stated, however, that they were seeking his detention given the seriousness of the potential charges.  Two MPs (Volodymyr Parasyuk and Semen Semenchenko) had asked that Bubenchyk be released under their guarantee.

It is undisputed that Bubenchyk spoke with Ivan Siyak in February 2016, but he denies that he made the very direct assertions about killings in the article published in English and in Russian/  He says that he never uttered the words used in the title:: “It’s True I Shot Them in the Back of the Head”.

Bubenchyk told Lviv Daily that the information in the text claiming that he had killed Berkut officers on Maidan was “a lie”.  He said that he had indeed met in Kyiv with a man who introduced himself as Ivan Siyak, and that he had given him an interview, but that he had said nothing about any killings.  He was trying to find Siyak to get him to remove the false information from the Bird in Flight site.

Siyak was aware of Bubenchyk’s objections, but did not change the text.  Instead he posted a YouTube video of an interview Bubenchyk gave back in November 2014 as alleged proof of the account given in his text.   Although the two accounts do coincide to a large extent, there is a critical difference between them, since in the videoed interview Bubenchyk says only that he shot at the Berkut officers’ legs to scare them away.

If Siyak had a video of the interview, he has thus far not shared it, so it should be borne in mind that the following account of what Bubenchyk said cannot be verified.

The article begins by explaining that the first deaths on 20 February 2014, the bloodiest day of Maidan, were of Berkut officers, and asserts that Bubenchyk said that he had killed them.  The Lviv activist was not well-known, but had been one of the heroes of the film Бранці [Captives] by Volodymyr Tykhy, and it was the producers of that film who seem to have arranged for this interview where Bubenchyk spoke of his experiences on Maidan as part of a Samooborona [Self-Defence] unit.    Although Bubenchyk denied having made the direct claims about killings attributed to him in the article, he does talk about how he fired ng at the Berkut during the film.

In the article, Bubenchyk asserts that Berkut were already on Maidan and closing in, having burned down the Trade Union Building.   In the morning of 20 February, somebody brought a Kalashnikov rifle and 75 bullets to the Music Academy where he was positioned.

The critical part of the text is where he says that he shot from out of a window on the second floor, from where he “could clearly see the police officers with their shields at the Independence Monument. There were about two hundred of them there behind the sandbags, there was no room for more. Assault groups with pump-action shotguns were advancing from there. They shot point-blank at the barricades, without any shame.

I was aiming at those who were in charge. I could not hear them, but I could see the gestures. The distance was very short, so for two commanders I only needed two shots. <> They say I shot them in the back of the head, and it’s true. It happened that they were standing with their backs to me. I had no time to wait until they turned around. There was no need to kill the others, only shoot them in the legs.”

It was later on 20 February that the gunning down of unarmed activists began, however the first deaths of Maidan activists were a month earlier, on 22 January 2014, and a large number of unarmed protestors had been killed already on 18 February.

Bubenchyk refutes the claim that there were a lot of firearms on Maidan, and claims that if there had been, “nobody would have let the police shoot our people”.  In Siyak’s article, Bubenchyk clearly views his actions as justified, and asserts that “my victims are criminals, enemies”.

In fact, he fleetingly touches on one of the problems with this position when he mentions that he had met (former) Berkut officers fighting for Ukraine in the ATO zone (the war in Donbas).  “If they are at war consciously, not for the veteran status or the money, then it could purify them. But I have no wish to communicate with them”.

Other former Maidan activists have spoken of the role many ex-Berkut officers played in the war in Donbas, and clearly feel that their attitude to them changed as a result of their shared defence of Ukraine.

So what did he say, and does this matter?

Detektor Media spoke with people involved in the film and with Bubenchyk soon after publication of the interview and his statement that parts were false.  Volodymyr Tykhy and the producers asserted that the text of the interview, which they had themselves organized, was built out of phrases that had been taken out of context.

Asked why he had spoken about such personal things with a journalist he didn’t know, Bubenchyk said that he had been told that he was a good journalist and a decent person.  He says that Siyak had, however, totally violated human values and behaved without any decency, hurling all this “dirt” in his direction.  He believes now that Siyak was acting according to some plan and that he is now enjoying the dirt.

It is unclear if he sees any more of the text as being a distortion of his position, but certainly denies having made the categorical statement given in the title about shooting the Berkut in the back of the neck and nowhere says that he shot to kill.

If the investigators have firm grounds for suspecting that Bubenchyk was responsible for two killings, then what Siyak wrote may not matter.  It is clear at present only that they certainly wish to question him, but have not formally charged him.