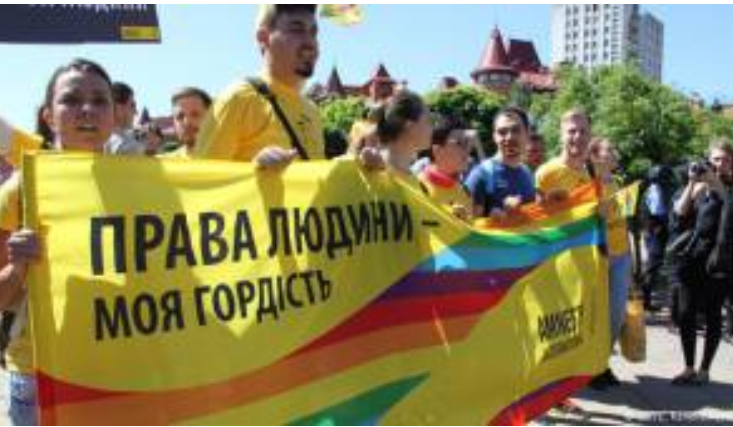 Ukraine’s Anti-Discrimination Ombudsperson has set an important, though controversial, precedent by demanding that a petition purporting to ‘defend family values’ be removed from the President’s official website as in violation of the rights of sexual minorities and inciting discrimination.  The petition in question “asked for measures to be taken to stop propaganda of homosexuality and to defend family values” and was, accordingly, removed from the electronic petitions section.

The petition had been supported by various churches and religious organizations, and, according to UNIAN, had received 23 thousand signatures when deleted on 28 March.  Its author was informed that the Ombudsperson on Human Rights, Non-discrimination and Gender Equality Aksana Filipishyna had demanded its removal as containing “calls to restrict human rights and elements of incitement to restrictions on the basis of sexual orientation and gender identity (belonging to the LGBT community).”

The removal of the petition was greeted warmly by some and condemned by others with UNIAN reporting calls on social media to picket the President’s Administration demanding “that the rights of believers be taken into account”.

Maksym Vasin, Head of the Institute for Religious Freedom, wrote that “the crux of the matter is very simple”, going on to quote Article 10 of the European Convention on Human Rights which guarantees freedom of expression.

“If individual Ukrainian citizens are not allowed to express their point of view on this or that social phenomenon or legislative process, that is an infringement of their right to freely express their views and, in turn, discrimination against them. Since it transpires that supporters of gender ideology enjoy this right without obstruction, while citizens with a conservative point of view on state family policy face restrictions in expressing their position.”

This was clearly one of many protests expressed, and the Ombudsperson’s Office on 3 April posted an explanation of the grounds for their intervention, entitled ‘Publication of petitions which encroach upon human rights and liberties is in violation of Ukrainian legislation’

After outlining the above-mentioned intervention as encroaching on the rights of members of the LGBT community and seeming to call for discrimination on the basis of sexual orientation, the Ombudsperson cites Article 68 of Ukraine’s Constitution.  This states that no one should “encroach upon the rights and freedoms, honour and dignity of other persons”.

She stresses the fact that while each person is guaranteed freedom of religious views and convictions and of expression, both Ukraine’s Constitution and the European Convention impose some restrictions in order to protect the rights and freedoms of others.

She notes that the petition claimed that “non-traditional sexual orientation of parents have a terrible influence on children’s future life” and that adoption by homosexuals was “an act of violence against these children” (and other claims).

The petition, she asserts, places in doubt the need to ensure and protect the rights of LGBT and encroaches on their right to respect and dignity, the right to a family; the right to freedom from discrimination.  The assertions made in the petition were offensive and disrespectful and contained elements of incitement to discrimination.

She notes that activists from some organizations had tried to encourage support for analogous petitions on the sites of the Verkhovna Rada and Kyiv City Council by asserting that homosexuality leads to an HIV/AIDS epidemic.

Article 23-1 of the Law on Citizens’ Appeals, she points out, specifically states that a petition may not encroach on human rights and liberties and that an infringement of this cancels out the requirement to publish the petition.

She calls on the authors of future petitions to ensure that they do not contain assertions that infringe human rights since their wide circulation, via the Internet, can promote the formation of a prejudiced attitude to certain groups in society.

The message ends by stressing that public officials are obliged to comply with current legislation and that Article 6 of the Law on the Principles for Preventing and Countering Discrimination in Ukraine specifically prohibits any form of or incitement to discrimination, on the grounds, among others, of their sexual orientation.

It is pointed out that Article 10 of that same Law gives the Human Rights Ombudsperson the right and duty to react to the publication of petitions with such content.

Views in Ukraine remain divided and it is unlikely that the Ombudsperson’s statement will convince those angered by the petition’s removal.  It is certainly an unprecedented position from the Office of the Human Rights Ombudsperson.   Back in 2013, the then Ombudsperson Valeria Lutkovska had been ready, together with some MPs, to ask the European Commission to waive the requirement on amendments to anti-discrimination legislation which added the prohibition of discrimination at work on the grounds of sexual orientation.  She had claimed that Ukrainian society was not ready for this move.

At the time, there were also assiduous attempts by members of the then ruling Party of the Regions to introduce legislation similar to that in Russia prohibiting this same so-called ‘propaganda of homosexuality’.

Despite the amendments to anti-discrimination legislation being a requirement for visa liberation and, effectively, the European integration which Maidan had upheld at such a cost, it took many attempts before the amendments were finally passed on 12 November 2016.