Putin’s ‘Russian World’: Children taught war and violently detained for daring to protestCrimean children take oath to serve as friends of the Russian FSBRussia deploys ‘Cossacks’ as thugs and ‘witnesses’ in politically-motivated prosecutions in occupied CrimeaChildren taught how to hunt ‘the enemy’ and disperse protests in Russia and occupied CrimeaRussian Defence Ministry wants a million children in ‘Youth Army’ by 2020Russian invaders torture and 'deport' Ukrainians for ‘extremist’ suport for Ukraine in Zaporizhzhia oblast Children to undergo compulsory military training in both Russia and occupied Crimea Russian MP promises a child from Kyiv missiles as a 'New Year present'90% of teachers in occupied Melitopol refuse to collaborate with Russian invaders Children trained to be ‘Putin’s faithful soldiers’ in Russian-occupied Crimea Ukrainian kids from occupied Melitopol indoctrinated and enlisted in Russia’s ‘Youth Army’ Russia heavily targets Crimean Tatars in forced mobilization in occupied Crimea Russian invaders remove Ukrainian language and literature from schools Russia teaches Mariupol children to shoot and to hate Ukraine Russia begins propaganda of war against Ukraine at pre-school level “I will not fear ZEvil”– digest of Russian protestsEven in Russia, Putin’s ‘denazification’ claims prove no excuse for war against Ukraine22 journalists killed since Russia began its total war against UkraineChief Rabbi of Odesa: “Ukraine is the safest country in the world for Jews” Terror and abductions as Russia tries to break Ukrainian resistance in Kherson and other occupied cities
• Topics / Children’s rights
• Topics / Human Rights Abuses in Russian-occupied Crimea 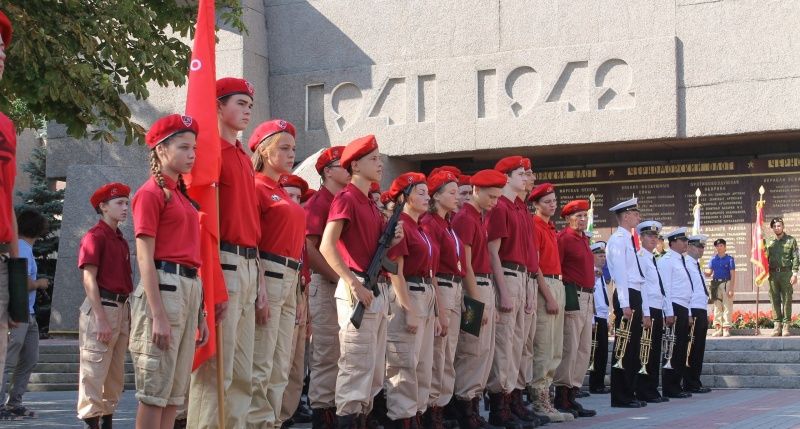 Crimean youth are to be enlisted for filling the Internet with ‘correct information’ about life in Russian-occupied Crimea, with the occupiers determining just what content is ‘correct’, and what is to be dubbed ‘fake’.  According to the Kremlin-loyal New Day report, this is considered one of the main tasks before the so-called Crimean ministry of education, science and youth.

‘Deputy minister’ Konstantin Alikin says that they have already created a base for engaging youth in combatting what he calls “the huge amount of fake news and lack of positive content”,  which they plan to develop further.

“Not only the authorities should post information. It is important that young people themselves post on the Internet that information which we consider positive and correct about the achievements and successes of Crimea, the country and our leaders.  We see this direction to be the most important.  We are forming, so to speak, a “Media Guard”.

Russia is currently blocking at least 30 Ukrainian Internet sites, including most of the main websites which regularly report on human rights abuse in occupied Crimea.  It is not, however, able to prevent such ‘negative information’ being spread through social media, not to mention the large number of UN, EU and international resolutions and reports outlining and condemning the systematic deterioration in fundamental rights under Russian occupation.

Russia has long understood that Russian state-controlled media or Russian officials are not viewed as reliable sources, and therefore cultivates a whole stream of ‘foreign experts’ and journalists who can be relied upon to take a pro-Kremlin stance.  The same principle is involved here: overt propaganda from the mouths of Russian-controlled officials can be made that much more convincing if ‘innocently’ posted and circulated by young Crimeans.

Human rights groups have long warned of the rampant militarization of Crimean society, especially that directed at young people.  A campaign is now underway to enlist Crimean children into the Russian Defence Ministry’s ‘Youth Army’ [Yunarmia], a formation which has been likened to Hitlerjugend and other “formations in which young people became tools of totalitarian regimes in Europe”. Russia’s Defence Minister Sergey Shoygu has quite openly stated that a major goal of the Yunarmia movement is to popularize military ideology and foster a special bond “between young Russians and the army”.

Russia’s inculcation of such formations, as well as its conscription of Crimean youth into the Russian army, are not just alarming.  International conventions to which Russia is a party clearly stipulate that any such practice is prohibited on occupied territory.

There has been mounting focus on so-called ‘military – patriotic’ education in Russian since Vladimir Putin came to power, with Russia now aggressively and illegally trying to foist this on occupied Crimea.

The so-called ‘military-patriotic’ education involves wearing military uniform and learning how to use firearms.  The idea is inculcated of victory in war with the help of armed conflict.  Iryna Sedova from the Crimean Human Rights Group stresses that all of this is aimed at trying to legitimize Russia’s occupation of Crimea and the actions of the armed paramilitaries who worked together with Russian soldiers to secure control of the peninsula.  It is those so-called ‘self-defence’ paramilitaries who were involved in the abduction and horrific murder of Reshat Ametov and the torture of other pro-Ukrainian activists, and who are believed to have been behind many of the disappearances since Russia’s invasion.

In June 2016, a campaign to recruit people as contract soldiers had an image of a soldier with the words ‘Politeness is your choice’.  After it became impossible to maintain the lie that the Russian soldiers without insignia who invaded Crimea were not theirs, Russia began assiduously pushing the term ‘polite people’ to supposedly describe the soldiers.  On the third anniversary of annexation, one of the choreographed performances had children dancing up to the monument to this ‘polite person’ invading soldier, and saying ‘thank you’ in unison.  Another such performance had young teenagers dancing about with machine guns.

Krym.Realii reports that the management of the Artek Children’s Centre has signed an agreement of partnership with Russia’s Investigative Committee. During 2018, the Investigative Committee plans to hold a program entitled ‘young investigator’ at the camp in order to arouse interest among young Crimeans in such a profession.

One can perhaps expect a Crimean remake of the performance in St. Petersburg on September 1, 2017, at a ceremony for future ‘investigators’ when a very small children solemnly promised Alexander Bastrykin, head of the Investigative Committee that she would shop her mother if that were required by her work.

All of this propaganda should be viewed against a background in which expressing pro-Ukrainian views, showing support for the Crimean Tatar Mejlis or exiled Crimean Tatar leaders, or solidarity with political prisoners can get a person into serious trouble.  Three Crimeans – journalist Mykola Semena, Crimean Tatar Mejlis leader Ilmi Umerov and Suleyman Kadyrov – have already received real or suspended sentences.  Each did no more than articulate the position taken by the UN and all international bodies, namely that Crimea is Ukraine and Russia illegally occupying it.  Rustem Memmanov was fined in June 2017 for a Facebook birthday greeting to veteran Crimean Tatar leader Mustafa Dzhemilev, in which he mentioned the Crimean Tatar Mejlis.  There have been a large number of armed searches, arrests and even jail terms over entirely innocuous social media posts, some of them far predating Russia’s annexation.  Several members of Crimea Solidarity, the initiative for political prisoners and their families, have themselves been arrested and are now facing huge sentences.