Russia tries to drive Ukrainian Church out of Crimea 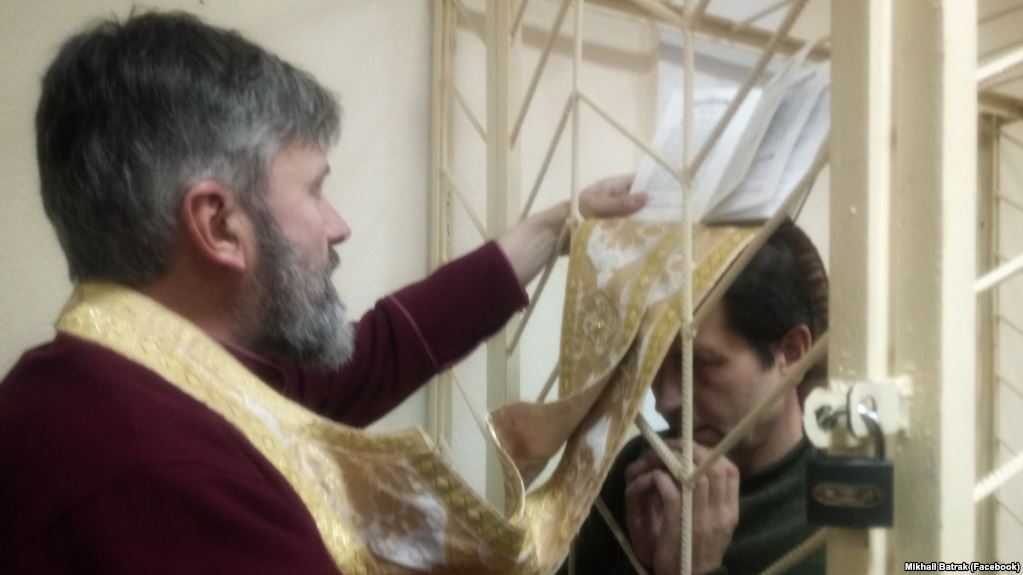 While it is Crimean Muslims who are in ever-increasing numbers facing imprisonment for their faith in Russian-occupied Crimea, it was the Orthodox Church under the Kyiv Patriarchate that first came under fire following annexation, and that remains under relentless pressure.  It is also only a matter of time before Russia begins imprisoning Crimean Jehovah’s Witnesses, as in Soviet times, either directly for their religious worship which Russia has banned, or because they refuse to renounce their faith in order to be allowed to do alternative military service.

After four years of occupation, it is increasingly clear that only those who show political loyalty to Moscow can hope to enjoy religious freedom.  Russia’s religious persecution in occupied Crimea, the similar tactics used by the Kremlin’s proxy ‘republics’ in Donbas, as well as Moscow’s treatment of its own citizens, makes it difficult to understand why the US State Department refused to designate Russia a Country of Particular Concern in 2017.

By October 2014, Ukrainian religious leaders and human rights groups were warning of a witch hunt  in occupied Crimea against all but one faith, the Orthodox Church under the Moscow Patriarchate.   Most faiths reported intimidation, attempts to discredit them, to destroy their property, etc.

“Who could have imagined that in the 21st century in the centre of Europe we would be seeing widespread repression unleashed on the basis of religion? ”   The question asked back then by Said Ismagilov, Mufti of the Spiritual Directorate of Muslims of Ukraine, is even more poignant now as at least 30 Ukrainian Muslims are imprisoned on trumped-up charges linked with their faith.

Already in 2014, Russia had demanded that all religious organizations and communities in Crimea re-register under Russian legislation.  The latter is more restrictive that Ukrainian with respect to believers, imposing far more onerous demands on bodies wishing to function as a legal entity.  One of the requirements is that the religious organization adds words to its association papers that Crimea is part of Russia which many are not prepared to do.  The lack of such registration means that the communities lose the right to use and dispose of their churches, mosques, places of worship or other buildings, and face numerous other restrictions.

Russia is using these restrictions as a form of pressure on religious groups, but also as a method of brazen robbery, especially directed against the Orthodox Church under the Kyiv Patriarchate.

According to Archbishop Kliment, the Head of the Church in Crimea, the number of parishes has fallen sharply over the last four years.  There are now only eight, and a mere four priests.  Even those priests who remained back in 2014 felt compelled to move their families to mainland Ukraine through well-founded fears for their safety.

Three legal suits involving the Kyiv Patriarchate Church are currently underway – over churches in Sevastopol and the village of Perevalne, as well as over the actions of the bailiffs who carried out an extraordinary raid on the Cathedral of Volodymyr and Olga, the main Cathedral of the Ukrainian Orthodox Church under the Kyiv Patriarchate in Simferopol, on 31 August 2017.

On that day Russian enforcement officers and bailiffs, many of them masked, burst their way in, blocking the entire premises and using force against Archbishop Kliment, injuring his arm.

Bailiffs forced their way onto the territory of the Cathedral at 10 a.m. on August 31,damaging property on the ground floor, and the doors to the altar on the first floor.  They removed a cross, church chalices, rare icons and some items of porcelain and crystal that had been given to the Church, as well as rugs.  No inventory was made of the items and Archbishop Kliment was not given any document to sign.

The battle to seize control of the Cathedral of Vladimir and Olga began soon after Russia’s invasion.  Kliment has since said that he was initially offered 200 thousand dollars to give the Cathedral up.

Archbishop Kliment has tirelessly defended those facing persecution since Russia’s invasion.  He was detained on Oct 19. 2016 on his return from mainland Ukraine and held for an hour.  No explanation was given, but the incident came just a week after he addressed an urgent plea to international bodies to “take decisive measures to protect fundamental rights of Ukrainians in Crimea”.

There is no evidence that they heeded his call, but he has remained very active, and has been a vital source of spiritual comfort to imprisoned political prisoner Volodymyr Balukh and his mother.   Balukh, who has now been on hunger strike for three weeks, is facing new absurd charges, and Kliment recently succeeded in becoming a civic defender for the Ukrainian imprisoned since December 2016 for his courage and the Ukrainian flag he refused to remove from his home.