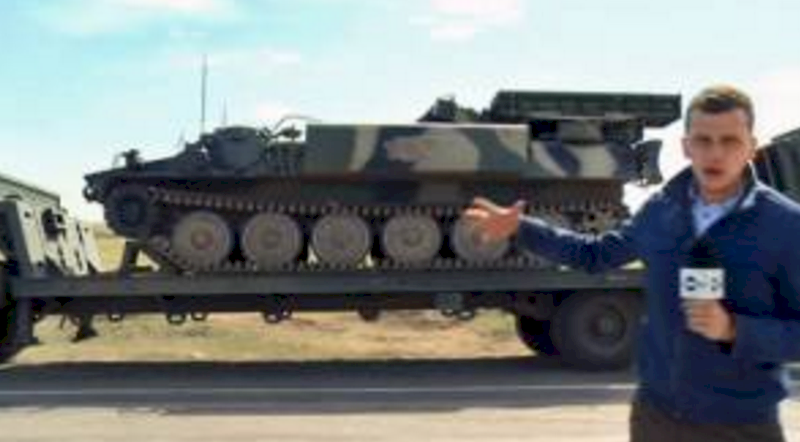 Russia has spent four years denying responsibility for the tanks and huge arsenal of weapons provided to the Kremlin-controlled militants in Donbas, and using OSCE observers to purportedly back this denial.  While this is not the observers’ fault, the vast expanse of border area physically beyond their scope, as well as the clamps placed on what they are mandated to observe, must surely place the sense of their mission in question.

The mission’s limited scope is stated clearly enough in its title – the OSCE Observer Mission at Russian Checkpoints Gukovo and [Russian] Donetsk.  It has 20 civilian monitors, including the Chief Observer, who “operate on a shift basis to ensure cover 24 hours a day, seven days a week”.

Frustration at what the mission was not even mandated to achieve  was expressed early on.  In April 2015, analyst Judy Dempsey noted that the restricted possibility for checking “what and who enters Ukraine from Russia … makes a mockery of the ceasefire in Ukraine and undermines the organization”.

Almost four years after the mission was created in July 2014, Oksana Kovalenko has addressed this “illusion of control”.  She explains that Ukrainska Pravda “decided to find out what this strange mission is about, why it monitors only 40 metres of the Russian-Ukrainian border, and why it can’t get close and detect what kind of trains are illegally crossing the Ukrainian-Russian border.”

Ukraine lost control of a vast expanse of the border between Russia and Ukraine during the summer of 2014. It was this uncontrolled border that made it possible to bring the BUK missile launcher that downed Malaysian airliner MH17 into militant-controlled territory in July 2014, as well as tanks, military personnel, mercenaries and arms.

Only 40 metres of this territory has been ‘monitored’ since July 2014 by the OSCE mission stationed at the two Russian checkpoints at Gukovo and Donetsk. Kovalenko explains that the idea of such a mission was first raised on 2 July 2014 at a meeting of the leaders of the ‘Normandy Four’ (Ukraine; Russia; France and Germany).   At that time, the amount of area not controlled by Ukrainian border guards was small, mainly two checkpoints over which there was fierce fighting – Izvarino and Vosnesenivka (formerly Chervonopartizansk).

By 11 July, those two checkpoints had been regained, however there was a large part of the border which was now not under Ukrainian government control. The following day, Russia officially proposed to have OSCE observers at two Russian checkpoints – Gukovo and Donetsk that are opposite Izvarino and Vosnesenivka, now under the control of the Ukrainian Border Guard.

The OSCE was thus invited to observe checkpoints crossing into Ukrainian-controlled territory where Russia was least likely to send soldiers, tanks and other heavy artillery across the border.

It was also mandated to watch only that specific area, and pay no attention to anything outside it.

This emasculated ‘observer mission’ was launched by a unanimous vote on 24 July.  By 7 August 2014, Kovalenko writes, Ukraine had lost control of 400 kilometres of the border.

It was seen as best to agree to Russia’s strict conditions regarding the mission’s tasks in order to get it launched, with the idea being that its geographical scope could later be expanded.   That, however, has never transpired.

Not only are the monitors continuing to observe a part of the border that is least likely to be used for illegally fuelling Russia’s aggression, but they are also prevented from observing very much at all.

Kovalenko cites Paul Picard, the first Chief Observer, as pointing to the severe restrictions on their mission.  She believes that it was Russia who won from the situation.

“When, during the battle around Ilovaisk, Russian military burst into Ukrainian territory, the OSCE mission could not physically record this.  That was convenient for Russian propagandists, who would enthusiastically spread headlines, quoting the OSCE observers, claiming that no tanks were coming across the border into Donbas.”

It is clear that both Picard and the current Chief Observer, György Varga, are aware of the problem.  Picard recounts how he would insist each time that their mandate was restricted to those two checkpoints and that they could not talk about what was happening on the rest of the 400 kilometres of the border.  Varga says that they can also only note how many trucks, etc. go through the two checkpoints, but cannot usually see who is inside because of darkened windows, etc.  Nor can they force drivers to open their car boots (trunks), etc. for inspection.  He adds that only about 37% of the people who cross the border in the Rostov oblast, do so at the checkpoints they are mandated to observe.

According to Ukrainska Pravda’s information, the observers are even prohibited from using any devices, including binoculars.  Their sources, including those in diplomatic circles, recognize that this mission is not meeting the demands Ukraine and other countries have of those observing the border area.  There is, however, nothing they can do about it since any change would require consensus from 57 countries and Russia blocks all attempts to broaden the mandate.

While Ukraine’s attempts to get permanent OSCE observers on the whole stretch of the border are blocked by Russia, the (separate) OSCE Special Monitoring Mission’s efforts to get unrestricted access to the border from the Ukrainian side run up against resistance from the Kremlin-backed militants.

The OSCE Gukovo and Donetsk checkpoint weekly updates can be read here.  Even they provide some indication of Russia’s involvement in the conflict, however this does not make up for the harm the illusion of control causes.  However often individual monitors may stress that the mission’s scope is restricted, the very fact that they are there and their results are reported make it easier for Russia to deny the steady flow of military and human supplies which is part of its undeclared war against Ukraine.

See also: Russia’s weapons of Ukraine’s destruction were not "found in Donbas mines"