Poroshenko accused of creating a weapon against critical NGOs, like in Russia & KazakhstanUkraine: From targeting anti-corruption NGOs to "a witch hunt on all civic activists"?Poroshenko signs anti-Maidan law against NGOs & journalists fighting corruption"Faked reform" on electronic declarations lets Ukrainian officials steal with impunityGreen Light for Corrupt Politicians slipped into 2016 BudgetRigged and Secretive Fight against Corruption?Government accused of rigging anti-corruption selection commissionHead of Traffic Police Dismissed after Scandalous Lifestyle ExposedIt’s Tax Time In Ukraine, And Financial Discrepancies Suggest Corruption EnduresBehind the declarations: how public officials lived – and live nowParliamentarians’ secrecy regarding income given judicial OKVerkhovna Rada and Constitutional Court least willing to divulge public informationCourt rejects Verkhovna Rada claim that staffing details are not for the publicOPORA takes secretive Verkhovna Rada Office to courtCHESNO: Office of the Verkhovna Rada flagrantly violating Public Information ActUkrainska Pravda takes parliament to court over concealed informationResidences of Azarov, Lytvyn and Yushchenko to cost the taxpayer 50 million UAHCourt has no problem with parliament not handing over MP’s declarationsVerkhovna Rada Office refuses to hand over Deputies’ declarationsPublic Information Law like a Bolt from the Blue for the Authorities
• Topics / NGO activities 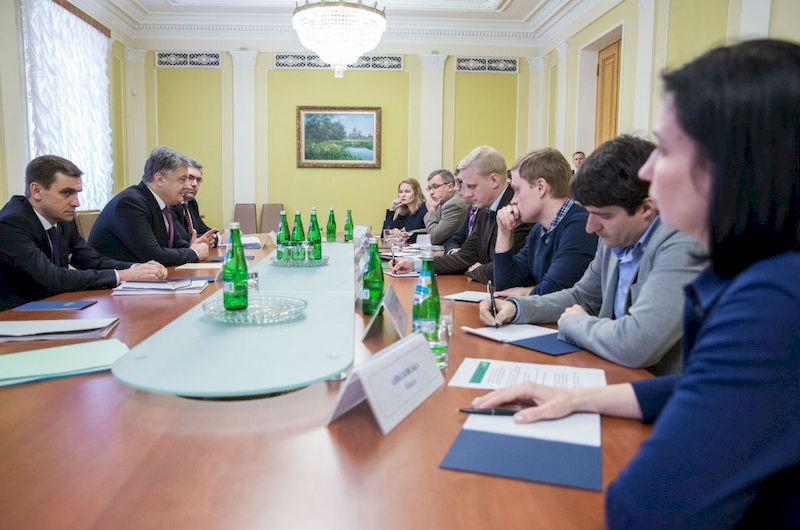 For more than a year, Ukraine’s government and activists have been at odds over a March 2017 law that requires activists to disclose their assets online in the same way that public officials do. The law was roundly criticized by Ukrainian civil society as well as by the international community.

But now, the Presidential Administration and independent lawyers say that the law is invalid and unenforceable, based on a 2012 Constitutional Court decision. No one can be forced to publicly submit information about their private life without their consent.

Dmytro Shymkiv, the deputy head of the Presidential Administration, led the effort to find a compromise between the government and civil society. He appeared relieved. “…It looks like we found an answer among the decisions of the Constitutional Court,” he said.

The decision states, “It is not allowed to collect, store, use, and disseminate confidential information about a person without his consent, except in cases specified by law, and only in the interests of national security, economic welfare, and human rights.”

One Kyiv-based lawyer who spoke off-the-record explained that this means that the e-declaration requirement is not legally enforceable against individual activists. The decision may also apply to foreign board members, including Naftogaz’s supervisory board, although the best way to test the decision is to put the specific issue before the Constitutional Court, the lawyer said.

The 2012 court decision excludes public officials, which means that they still must declare their assets.

But Ukraine’s activists are not convinced. “It is a new trick from the Presidential Administration, which for already a year imitates they’re sincerely looking for the solution to the problem,” said Daria Kaleniuk, executive director of the Anti-Corruption Action Center in Kyiv.

Getting the Constitutional Court to consider the issue will take enormous time and resources— and that may be exactly the government’s goal. Kaleniuk worries that as the court deliberates, activist asset declarations will be used to discredit, intimidate, and distract them from their watchdog activities and force them to spend their limited resources on protecting themselves.

Yaroslav Yurchyshyn, president of Transparency International Ukraine, isn’t satisfied either. He urged parliament to officially abolish and decriminalize this requirement on activists altogether. If it isn’t, he predicted, “the pressure on activists will only increase.”

Roman Waschuk, Canada’s Ambassador to Ukraine, agreed. “The March 2017 law was ill-advised and—as the Venice Commission has now reiterated—an infringement on the rights of civil society. While we welcome any measure that might reduce the risk of criminalizing activists, full repeal of this requirement and a shift in emphasis to sensible NGO transparency should remain the goal.”

The law, passed by parliament in March 2017, was far-reaching. Investigative journalists who regularly expose corruption as well as international board members who oversee anticorruption NGOs were also subject to the disclosure law.

Shymkiv and his team spent nearly a year searching for a solution that would abolish the e-declaration for activists.

In July 2017, the Presidential Administration tried to walk back the requirements and find a compromise. Bills 6674 and 6675 were introduced in parliament and would have replaced individual personal declarations with organizational public reporting.

But parliament failed to pass the bills. Activists and the government remained at loggerheads, and the furor grew as the disclosure deadline neared. Activists from the Anti-Corruption Action Center and Transparency International-Ukraine complied, while others—such as the Reanimation Package of Reforms—refused on principle.

But as the April 1 disclosure deadline loomed, Shymkiv and his team began to focus their search in the legal code for anything that might mitigate the risk of criminal prosecution. His team unearthed the 2012 decision and the compromise solution it may provide.

It now remains to be seen if the courts uphold their interpretation.