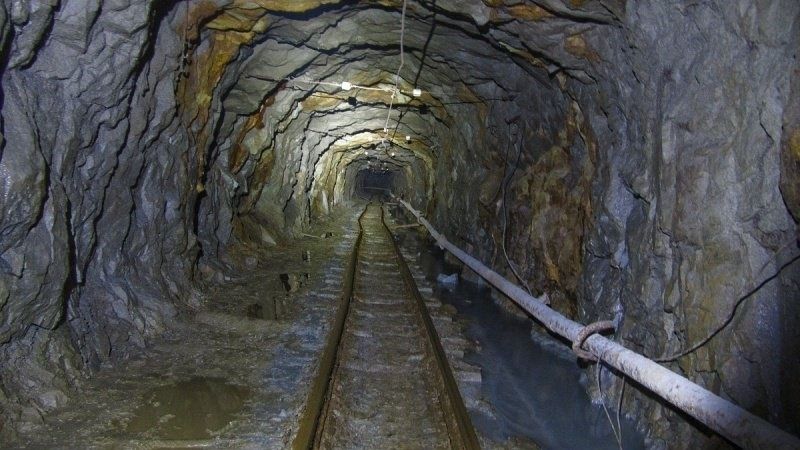 Militants from the self-proclaimed ‘Donetsk people’s republic’ [DPR] are ignoring local residents, the Ukrainian government and international warnings, and flooding the Yunkom (Yuny Komynar) former coalmine which was used for a nuclear test in 1979.  The scale of radioactive contamination of soil and water sources could prove catastrophic.

Staff at the Yunkom mine in Bunhe told the OSCE’s Special Monitoring Mission that some of the mine’s pumps would be shut down on 14 April.  This will lead to the gradual flooding of the mine, including the capsule in which a nuclear device was detonated on 16 September, 1979.  Although nobody knows how the capsule will react under water, the risk of major contamination throughout Ukraine’s independence was always considered much too high and pumps were constantly repaired to keep the mineshaft dry.

It is these pumps that the DPR militants now think are too expensive to repair, quoting a figure of “600 million [Russian] roubles” (or 7,876 thousand Euros).  It seems that the militants’ Russian paymasters are willing to send vast stocks of tanks, heavy military equipment and weapons, but do not want to pay for people’s safety.  It is clear from addresses during protests back in June 2017 that Russian specialists are well aware of the problem – one with consequences that could affect Russia, as well as Ukraine.

The official ‘DPR’ version is, of course, very different.  On 22 March, 2018, the planned suspension of the pumping as of 14 April was announced, with this claimed to be after “comprehensive scientific studies by leading DPR and Russian Federation institutes”.  They had purportedly concluded that the immersion in water would not lead to contamination of the environment and the threat of radiation.

This has not convinced the US State Department, whose representative on April 13 warned that “Plans by Russian proxies to flood the abandoned YunKom coal mine … could threaten the drinking water of thousands of Ukrainians in Russia-controlled eastern Ukraine”.

The local population are clearly also unconvinced judging by the number of people who came out onto the streets in protest – something that can have adverse consequences in the so-called ‘republics’.

Exiled Donetsk journalist Denis Kazansky points out the bitter irony of the situation.  Since 2014,  Russia and its local supporters in Donbas have constantly pushed the narrative that Ukraine’s government never listened to the local population.  In fact, back in 2002, when the authorities considered flooding Yunkom and adjacent mines, it was local protest that persuaded them to back down.  Each year under all Ukrainian governments, huge amounts (around 45 million USD) were spent ensuring that the mine was kept dry.

On 24 June 2017, a large number of local residents gathered to protest against plans to flood Yunkom.  Their protests were ignored, and a local journalist Yulia Skubaeva, who reported the situation, lost her job.  One of the older people obviously linked with the mine spoke then of their concerns.  He recalled how, even during the worst of the shelling in 2014, they had understood the danger from the mine and had run there to ensure that it did not get flooded.

Although it is Yunkom that is of critical concern, there are, in fact, several hydraulically interconnected mines, some of which the militants began flooding last year.  Back in 2017, environmental experts warned that the flooding of all these mines, including Yunkom, “creates a risk of practically uncontrolled flooding of the Klivazh facility [the underground chamber, or capsule, where the nuclear explosion was carried out, and the immediate surroundings].  The consequences of this are difficult to predict precisely but may include the contamination of groundwater and the wider geo logical environment with anthropogenic radionuclides. This may lead to a risk from radiation to human health and life.”

In contrast, these unnamed “DPR and Russian experts” have claimed that there is no danger, and so are ploughing ahead.  600 million roubles is, of course, a lot of money, Kazansky notes.  It is money that ‘DPR leaders Alexander Zakharchenko, Denis Pushilin and others would prefer to steal for themselves, or hand to Serhiy Kurchenko, the close ally of ex-President Viktor Yanukovych, who is believed to have gained control and vast wealth from appropriated enterprises on territory under militant control.

Journalists like Kazansky were forced out of areas under militant control four years ago, with many abducted and tortured before being released into exile.  There is no independent media in the so-called ‘republics’ and websites from Ukrainian government-controlled areas which report truthfully on events in Donbas are generally blocked.  At least one Ukrainian journalist Stanislav Aseyev remains imprisoned by the militants, and a number of the hostages exchanged in December 2017 had been seized, tortured and imprisoned for critical blogs, or expressing pro-Ukrainian views.

It is possible that the ‘DPR leaders’ and Russia are assuming that under such circumstances, all that is needed is to state that there is no danger and all will be well. The timing for such criminal recklessness could not be more poignant, coming just two weeks before the latest anniversary of the Chornobyl Disaster.  Then too, a communist leadership that cared nothing for its citizens, denied any danger and even sent children out onto a May Day demonstration.   That betrayal was to be one of the death knells of the Soviet regime.