Ukrainian prosecutor refuses to investigate police inaction during shocking anti-Roma pogromTerrifying Precedent Set by Authorities’ Response to Violent Anti-Roma PogromPolice, who watched on as homes were destroyed by Loschchynivka mob, now deny there were riotsShocking riots against Roma in Odesa oblast sparked by arrest of a man with an alibiThe arrest for a child’s murder that sparked anti-Roma riots in Ukraine may be based on faked DNA evidenceLoshchynivka child murder – mounting evidence that case against Roma man was falsifiedCrucial victory as Ukrainian court orders compensation for Roma families driven out of LoshchynivkaCourt in Ukraine passes life sentence on a young Roma with an alibi whose arrest triggered Loshchynivka anti-Roma riots Ukraine orders deportation of ethnic Ukrainian facing persecution in Russia for opposing Putin and the warECHR slams Ukraine over detention which triggered anti-Roma riots in Odesa oblastProminent Ukrainian activist Roman Ratushny killed defending Ukraine against Russian invaders Romani Voices From Hell: Discrimination, Epidemic, WarUkrainian Holocaust survivor dies in a Mariupol basement, seeking refuge from Russian bombsOver 60 places of worship in Ukraine, as well as sites of cultural heritage, have been attacked by the Russian invaders, with some totally destroyedUkraine Should Ratife The Rome Statute Of ICC — Euromaidan SOS appealRussian invaders kill 96-year-old Ukrainian Holocaust survivor Euromaidan SOS Statement on International Support Priorities for UkraineImprisoned for seven years as Russia"s revenge for Ukraine’s Euromaidan Chillingly retrograde Ukrainian court ruling justifies anti-Roma pogrom as ‘direct democracy’ Crucial testimony confirms doubts about child murder that sparked anti-Roma riots in Ukraine
• Topics / The right to a fair trial
• Topics / Interethnic relations 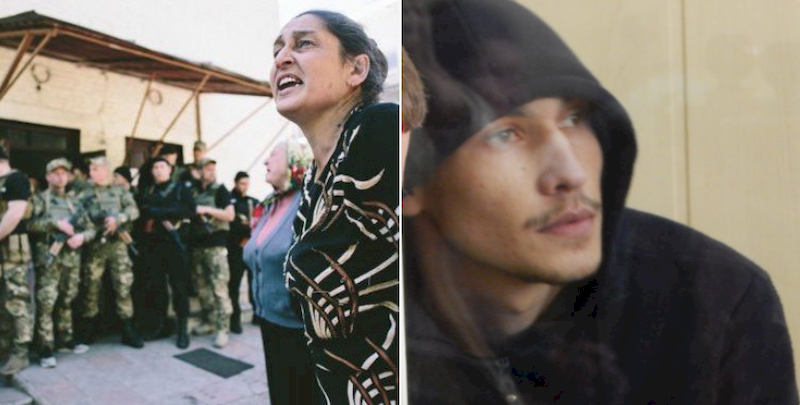 The court hearing the high-profile trial of a young man accused of the rape and murder of a child has rejected an application to hold the trial behind closed doors. The Odesa oblast trial is of public interest because of the anti-Roma pogrom which followed it, and because there are grounds for believing that the defendant is innocent.

The prosecutor had supported the application from the murdered child Angelina's mother that the entire trial be closed to the media and public.  The Prymorsky Court, however, ruled that only forensic evidence would be heard without the public present.

At the hearing on 18 April 2018, the court, under presiding judge Viktor Ivanov, ignored the objections from lawyer Andriy Leschenko that the accused, Mykhailo Chebotar is suffering from tuberculosis and needs treatment, and extended his detention for a further two months.  The SIZO [remand prison] staff acknowledged knowing of Chebotar’s condition, but said that he had not complained to the medical unit of feeling unwell.  In fact, the Hidnist [Dignity] Legal Monitoring Centre reports that at the previous court hearings Chebotar has looked very ill.  He has lost weight, is pale and jaundiced, and Leshchenko says that in the SIZO he constantly has a temperature.

During the hearing, the court heard testimony from the step-father of the murdered child whom the defence openly believes may be implicated in the crime.

Oleksandr Matyash presented his version of events during the night of 26-27 August 2016.  After work, he and friends, including 21-year-old Chebotar, had had some drinks in a local bar, after which they went to celebrate his brother’s girlfriend’s birthday.  They were there, drinking beer and vodka, until around midnight, and then returned to the bar.

Neighbours from the village discovered Angelina’s body the following morning, between two gardens. Mykhailo Chebotar’s cap was found on Angelina’s bed, and had not been there the previous evening.  Matyash gave no other details to suggest that Chebotar had committed the crime.

Asked by Leshchenko, he answered that he would be willing to take a DNA test.  According to Leshchenko, the forensic examination found two samples of DNA under Angelina’s nails – hers and those of another person.  They did not match Chebotar’s DNA.  The defence also says that the estimated time of the child’s death coincides with when Chebotar was in the Fortuna bar, in the company of several witnesses.

Only those witnesses who were drinking together with Matyash and Chebotar are to appear in court personally, with other residents of Loshchynivka giving testimony by video link.

The prosecutor’s office is continuing to resist legitimate demands that it investigate the failure by the police to properly react to the events that followed the discovery of Angelina’s body on 27 August 2016.  It keeps issuing decisions to terminate the investigation, which Yulia Lisova, the lawyer representing victims of the pogrom, then challenges successfully in court.

Chebotar was taken into custody almost immediately after the child’s body was found.  He is reportedly from a mixed family and not part of the Roma community.  He is also from Loshchynivka and had lived there all his life, giving the lie to the claims of those participating in the pogrom that they were against Roma who had arrived in the last three years.

Lisova and her colleague Volodymyr Kondur were particularly concerned by the role which the police played.  “They didn’t intervene at all, simply watched, with this making it possible for the angry citizens to destroy housing and evict Roma”, Lisova says. “We asked for a probe into the actions of the National Policy who, in our view, should have brought in reinforcements from other districts, but did not do so.  They took the decision to come only the following morning”.

As mentioned, the prosecutor has constantly denied any cause and effect link between police inactivity and the damage caused members of the Roma community.  They have also claimed that the task of safeguarding the health and life of Roma had been adequately fulfilled through the positioning of police observation posts for warning the Roma residents “at a safe distance from the epicentre of conflict”, and that there had been no significant material damage.

That is easy to assert since no expert assessment was made of the actual material damage incurred.  One of the victims, Zinaida Damaskina, for example, says that after the pogrom, she was effectively left to live on the street, since the crowd destroyed her home which contained all that she owned, and that she had spent all her money off for many years.

As well as the ongoing battle with the prosecutor’s office, there are also proceedings against the head of the Loshchynivka Village Council Viktor Paskalov, who called for the Roma to be evicted.