Russia tries to ‘give itself’ more Ukrainian territory 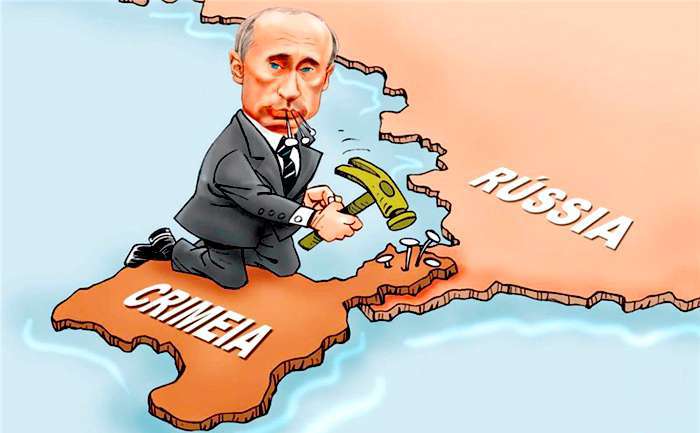 The Russian-controlled ‘government’ in occupied Crimea has decided to ‘hand over’  Ukraine’s Tuzla Island to Russia.  The move is linked with Russia’s construction of a bridge between Russia and Crimea, and is legally meaningless.  The territory remains Ukrainian according to international law, and, in accordance with Ukraine’s Constitution would require a national referendum to alter its geopolitical status.

Interfax reported on 17 April that the Russian occupation ‘cabinet of ministers’ had issued a decision to hand the 6.5 m² of land into Russian federal ownership.  The decision was reportedly taken in response from an application from Russia’s contractor for the ‘Crimea Bridge’ which Russia is building from the Taman Peninsula in Russia to Kerch, in Crimea, via the Tuzla Spit and Tuzla Island.

It is this Tuzla island that the ‘government’ originally established by Russian invading soldiers in February 2014 has now ‘handed over from Crimean to Russian federal property’.

The Tuzla Island has been considered part of Crimea since January 1941, before the decision on February 19, 1954 that Crimea should be included within the Ukrainian SSR.

From an international point of view there is no dispute over either the Tuzla Island or over Crimea.  They were and remain part of Ukraine.

Back in 2003, Russia, however, did not dispute that Crimea was Ukrainian, but tried to claim that the Tuzla Island had not been included in the 1954 decision.  It began building a dam between the Taman Peninsula and the island without any consultation with Ukraine.  The latter reacted firmly to what was clearly called a threat to its territorial integrity, and the dam works were eventually suspended.

Ukrainian political commentator Vitaly Portnikov, in a text entitled ‘The occupier’s fear’ suggests that Russia may in fact realize that it will not be able to hold on to occupied Crimea, and is trying to grab what it can.

Whether or not this is the case, the fact that Russia earlier disputed Ukraine’s sovereignty over the Tuzla Island makes it look very foolish now.  The Kremlin has tried to justify its landgrab by citing the invalid and rigged ‘referendum’ on 16 March 2014.  It can give no justification for appropriating the Tuzla Island.

Despite all of Russia’s attempts to assert a historical claim to Crimea, the peninsula was always organically linked and dependent on Ukraine – for water and power, as well as for food and other goods.

Russian President Vladimir Putin ordered that a bridge be built between the Taman Peninsula and Kerch soon after annexation, and vast amounts of money have been spent on the project.

The entire construction of the Kerch bridge has gone to a firm owned by a Putin crony Arkady Rotenberg.  He and his brother are reported to have increased their personal wealth by $2.5 billion over contracts for the Sochi Olympics and state-controlled Gazprom.  Rotenberg has long been under western sanctions for his role in undermining Ukraine’s territorial integrity, so would not lose more internationally over the bridge, while the open cheque style of funding gave him even greater possibilities for increasing his own wealth.

Ukraine has severed any agreements made between Moscow and Ukraine’s disgraced former President Viktor Yanukovych over construction of a bridge.  Since Russia is now building it without Ukrainian consent, it is in breach of Ukrainian and international law.  With sanctions in place, it would be very foolish for any foreign investors – or insurers – to have any involvement at all, and the only mention of an insurer has been of an obscure Crimean insurance company.

In fact, there are other reasons as well why insurers would want to stay well away from this project.

There appears to have been no environmental accountability despite the fact that the  Kerch Strait is an area of seismic activity, with extremely difficult weather and geophysical conditions. It was  reported back in June 2015 that the bill being pushed through parliament made it possible for the bridge to be designed and built simultaneously. Permits were effectively to be issued on the basis of an unspecified amount of preparatory work – and friendship.

In addition to the potential for disaster if the bridge collapses, there has been zero concern about major damage to the environment and the disruption of the water flow between the Black and Azov seas