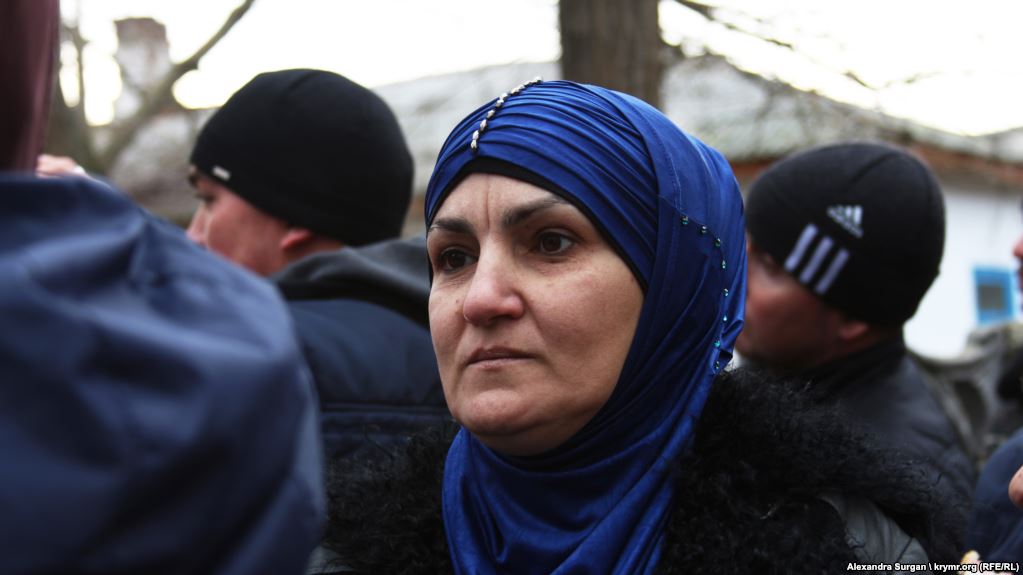 49-year-old Zarema  Kulametova has been convicted in Russian-occupied Crimea of ‘insulting’ a police officer on the day that her son disappeared for several hours after being taken away by armed enforcement officers.  She was sentenced to 250 hours of compulsory labour, and also ordered to pay 20 thousand roubles ‘compensation’ to the officer who had claimed to have been ‘depressed’ for several months.  The ‘court’ had rejected the defence’s application for an expert assessment of the supposed ‘insult’, and was undeterred by the fact that the alleged ‘witnesses’ had all provided identical written ‘testimony’.   If convictions on absurd charges as a form of intimidation have become standard in occupied Crimea, this case is an ominous precedent as the first time that an enforcement officer has sued for ‘compensation’.

The events on January 18, 2018 began early in the morning when 27-year-old activist Girai Kulametov and his family were subjected to an armed search.  Kulametov was one of two young men whose homes were searched that day, with both men having taken part in the single-person pickets on October 14, 2017 in defence of political prisoners.

Although the officers who burst into Kulametov’s home did admit that he was facing administrative, not criminal, proceedings, they took him away, with his parents and fellow activists unable to find out where he was for several hours.  Under Russian occupation, there have been a number of cases where Crimean Tatars were abducted and never seen again, or tortured by the FSB, and the hours of uncertainty would have been hellish.

It was during this period that the incident occurred.  Zarema  Kulametova denies the charges against her and says that her behaviour that day was motivated solely by her wish to find out where her son was.

She says that she saw the allegedly insulted police officer - Andrei Alexandrovich Rogozhin -  in the Kirov District Police Station and assumed from his behaviour that he was a guard.  She asked him several times where her son was, with his silence frightening her still further.  She says that he did not only not answer her questions, but ostentatiously chewed gum in her face.  Seeing her hysterical distress, he then pulled out his phone and started videoing her, which she considers to have been “clear provocation”.

She acknowledges that she should have been cooler, more restrained, but explains that this seemed impossible.  She had earlier seen her son taken away, in front of her, his pregnant wife and their small children, with all of this carried out in brutal and intimidating fashion.

She says that at first they suggested that she ‘admit guilt’ and they’d terminate the case and then, during one of the hearings, it was proposed that she apologize to Rogozhin.

She had nothing to admit to or apologize for and she refused.

She was later prevented from being present at the ‘court hearing’  where ‘judge’ Roman Vitalievich Milhailov jailed her son for ten days over a video posted on social media two years before Russia’s invasion and annexation of Crimea.  The video was linked with Hizb ut-Tahrir, an organization which was and remains legal in Ukraine.

Just over a month later, on 24 February, she was accused, under Article 319 of Russia’s criminal code, of supposedly ‘insulting a representative of the authorities’.

As mentioned, Kulametova’s lawyer Emil Kurbedinov applied to the court for an expert assessment of the alleged ‘insults’ but this was rejected.

The whole incident clearly depended on so-called ‘witnesses’.  In court a person called Sushchenko who had allegedly been delivering hot drinks and heard Kulametova’s words testified.

He was unable to recall the day or month that he had supposedly witnessed this ‘insult’, even though he almost never delivered to the police – except on that particular day.

The prosecution had tried to get all other ‘witnesses’’ testimony simply read out in court.  Since these several documents were absolutely identical, Kurbedinov objected and demanded to be able to question the people.

The ‘witnesses’ did confirm that Kulametova had been in a state of immense stress since she was unable to find out what had happened to her son.

All of this and other irregularities were ignored by the ‘prosecutor’ and ‘judge’ Mikhailov who found Kulametova guilty and sentenced her to 250 hours of compulsory labour.

The ‘court’s’ willingness to allow Rogozhin’s ‘compensation’ claim is at least as worrying.  In comments to Krym.Realii, Kurbedinov said that the claims made by Police Lieutenant Rogozhin to justify his claim of 50 thousand roubles should raise questions about his professional fitness.  Rogozhin asserted, for example, the two or three words that he had heard had thrown him into a depression which had supposedly lasted several months.  The case should have been thrown out, yet the prosecution demanded 300 hours of compulsory labour and that Rogozhin’s suit be allowed in full, with the ‘court’ essentially supporting this, only reducing both amounts.

Kurbedinov has said that they will be lodging an appeal against what he calls an absolutely lawless ruling.