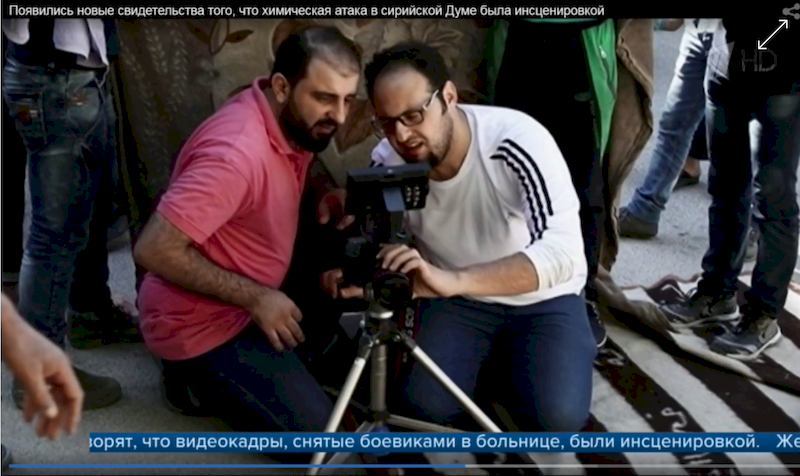 Two Russian state-controlled channels have used shots from a 2016 feature film as part of ‘evidence’ to back Moscow’s claim that the chemical attack in the Syrian town of Douma was staged.  Russia’s Defence Ministry is asserting that Britain was involved in ‘faking’ the chemical attack which is believed to have killed at least 60, including many children.

The Russian-faked ‘evidence’ was spotted by the independent TV Dozhd channel which reports that news broadcasts on both Pyervy Kanal [Channel One] and Rossiya 1 used film footage shot by Humam Husari, a young Syrian-born filmmaker in 2016.  The film was aimed at attracting international attention to the victims of the 2013 sarin gas attack near Damascus.  It follows a rebel fighter whose wife and child were killed in the chemical attack, and is forced himself to take up arms against an attack from government forces.

This was, understandably, not the impression that the two Russian channels gave.  On 22 April, in the Pyervy Kanal news report, the reader stated that “western politicians and the press are ignoring obvious evidence that there was no chemical attack in the Syrian town of Douma”.

Against a background of shots from Husari’s film, the reader continues with the words: “Testimony has appeared from witnesses, they also say that the video shots taken by rebel fighters in the hospital were staged”.

The same footage was shown on the weekly news roundup [«Вести недели»] with Dmitry Kiselyov on 22 April.  A person who is presented as part of the film crew says that “we also filmed how children in the block were thrown away, some in cars, some near them or under cars.  All had supposedly been killed, and their faces were yellow”.

A simple comparison of the specific shots makes the fake quite clear.

None of this is at all new to those who followed the propaganda warfare which Russia unleashed against Ukraine in 2014.  There was a constant barrage of claims that Ukraine was using phosphorous bombs, was bombing whole villages, etc., with the footage taken from films or from wars in other countries.

In June 2014, Russia’s Foreign Minister Sergei Lavrov proposed urgent UN Security Resolutions on the situation in Ukraine.  The ’evidence’ he claimed proved Ukraine’s use of phosphorous bombs in fact dated back to Iraq in 2004.  On another occasion, the footage from the North Caucuses was pulled out as ‘proof’ of supposed Ukrainian atrocities in Donbas.

The list of gaffes where a supposed ‘victim’ of Ukrainian ‘fascists’ on one channel was shown as the perpetrator on another, is also long.

It should be stressed that all of this was coordinated at a higher level.  According to former employees, the channels’ management got their orders directly from people in the President’s Administration.

There is also close coordination between the Russian state media and the FSB, with fake footage produced on television to pretend that ‘terrorists’ have been arrested, rather than Crimean Tatar activists.

The propaganda machine goes into overdrive where Russia, or its close partners like Syrian President Bashar al-Assad, are suspected of grave war crimes, such as the downing of Malaysian MH17 with the use of a Russian BUK missile, the nerve gas attack on Sergei Skripal and his daughter in the UK, and chemical attacks in Syria.

After the first reports of a chemical attack on Douma, Russia accused the renowned Syrian medics known as the White Helmets of having used actors.  It later tried to claim that the substance used had been dust, not chlorine.

It should be remembered that all these stories swirl around while it is Russia that has blocked an international investigation through its veto in the UN Security Council.

As part of its aggressive disinformation tactics against Britain after the nerve gas attack, Russia has singled Britain out as particular ‘villain’ in its claims that the attack in Douma was faked. The approach, backed by faked ‘evidence’ such as that above, is almost certainly effective for a domestic audience.  Such claims also have an impact abroad.  Even those who don’t believe them, are still duped into believing that there are different ‘versions’, rather than the truth vs. brazen lies.