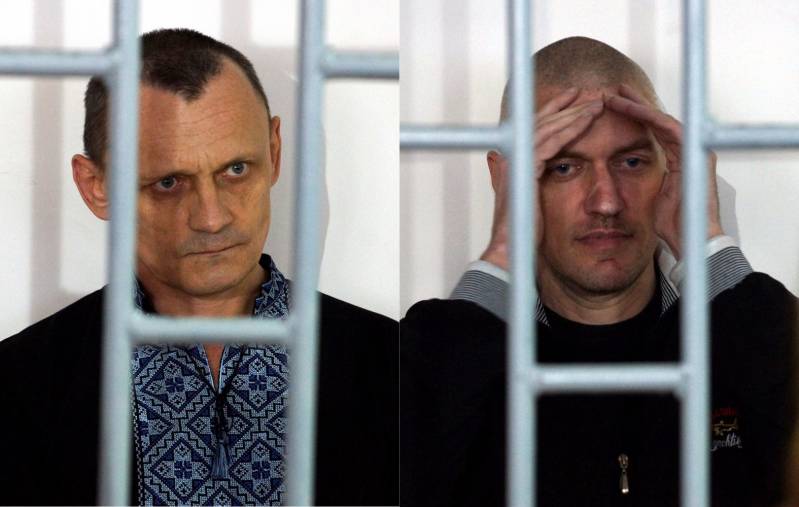 Russia’s “most falsified Ukrainian show trial” has taken on yet another cynical twist with Mykola Karpyuk and Stanislav Klykh each ordered to pay 500 thousand roubles ‘compensation’ for a death that neither man had anything to do with in a country that neither had set foot in.  This new court ruling is fairly theoretical since the two Ukrainians have been illegally held prisoner in Russia since 2014 and could not possibly pay the money.  A human rights lawyer has warned, however, that it could block any agreement for their release.

There have actually been three such court hearings, in connection with civil suits officially lodged by Zinaida Nikolayeva, whose conscript son was killed in Chechnya during the storming of Grozny on 31 December 1994.  One claim was against a third Ukrainian  - Oleksandr Malofeyev - serving a long sentence on unrelated criminal charges, and then the initial claim against Klykh and Karpyuk in September 2017, which awarded much lower figures.  Nikolayeva  appealed against the September ruling, demanding 5 million roubles in compensation.  The panel of judges at the Sverdlovsk Regional Court, under presiding judge Angela Karpinskaya, awarded one million, with each man supposed to pay half.

Nadiya Volkova, a lawyer for the Ukrainian Helsinki Human Rights Union believes that this supposed ‘debt’ could in principle prevent Karpyuk and Klykh’s release.  While this is true, the chances of the two men being released under the bilateral agreement on returning prisoners to serve sentences in their own country seem remote.  Yes, such a release would be possible only if Ukraine’s government agreed to pay the million roubles since the families of the two men could not.  This, however, would not be the only problem, since the agreement requires that the men serve out their sentences, which would be totally inappropriate in this grossly flawed trial of two men who have been recognized by international structures and human rights NGOs as political prisoners.

Klykh, a historian from Kyiv, was seized by the FSB in August 2014, after trying to visit a woman he’d met the previous year.  He vanished, as had Mykola Karpyuk, a Ukrainian nationalist politician who disappeared after entering Russia in March 2014.  If Karpyuk’s involvement in two nationalist organizations made him an obvious target for Russia’s undeclared war against Ukraine, Klykh’s link to any nationalist group was fleeting and far in the past.

Karpyuk and Klykh were accused of having fought against the Russian federal forces 20 years earlier in Chechnya.  Neither man had ever been to Chechnya and the entire story was fictitious,.  It was also immensely hypocritical coming, as it did, at a time when Russia was manning, arming and funding military conflict in Eastern Ukraine.

The case was entirely based on their ‘confessions’ extracted during the huge periods that the men were held totally incommunicado and without proper lawyers (18 months in Karpyuk’s case, 10 months in Klykh’s).  The lurid and wildly implausible ‘confessions; they signed to stop the torture were backed by provably wrong testimony provided by Malofeyev.  As mentioned, he is already serving a 23-year sentence in Russia and is a drug addict with diseases which would be life-threatening without appropriate medication.

It is not easy to say what exactly somebody was doing in a certain month, after twenty years.  There was, however, documented evidence that Klykh had been taking exams, and plenty of witnesses to confirm that Karpyuk was caring for his dying mother.

There were also the historical facts, and these were entirely ignored. The authoritative Memorial Human Rights Centre has followed both Russia’s wars in Chechnya and was therefore well-placed to assess the prosecution’s case.  In a four-part analysis*, it demolished the entire indictment and left no doubt about the methods that had been used to extract insane ‘confessions’ to heinous crimes supposedly committed together with Yatsenyuk & Co.   The methods included threats to apply the same torture to Karpyuk’s wife and small child.

(we wish you good health, courage and patience and hope that you will soon be released.  You are not forgotten.)