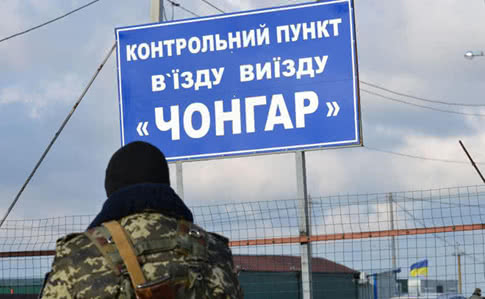 27-year-old Oleksandr Steshenko from Kharkiv has become the latest Ukrainian to suffer the cost of visiting Crimea under Russian occupation.  Steshenko first disappeared on 11 April, with the story he was still able to give his mother by phone radically different from the occupation authorities’ version when he was finally tracked down ten days later.  He has now disappeared again, after being held in administrative arrest, and lawyer Aider Azermatov believes that this must be viewed as an abduction.

Steshenko’s mother first rang the Crimea SOS helpline on 12 April, saying that her son had been detained by Russian border guards (part of the FSB) at the Chonhar crossing between mainland Ukraine and Crimea.   He had managed to phone her in the morning of 11 April and told her that he had been stopped by the border guards who doubted that he was the person on the photo in his passport.

Crimea SOS had information then that the taxi driver waited for Steshenko at the border crossing for around four hours before a Russian official came out, took Steshenko’s things from the car and told the driver not to wait.

On 14 April, the FSB border administration in Simferopol confirmed that Steshenko was in their custody, but would not allow a lawyer to see him, with this repeated on 16 April. At this stage, the lawyer was given the same reason, that Steshenko had mentioned when he last spoke with his mother on 11 April.

The pretext was implausible, since Steshenko had travelled to Crimea several times using that same passport, and in any case it soon changed.

On 24 April lawyer Edem Semedlyaev reported having discovered Steshenko’s whereabouts.  He had been told that the young Kharkiv man had been detained for smoking at the bus station, with the term of administrative arrest due to end at 22.00 on 24 April, i.e. that evening.  Semedlyaev was, fortunately, able to see Steshenko, and says that he was “in a satisfactory condition”.  The young man did not want to give any details, but said that the official version was that he’d been detained for smoking at the station, but that he had not been shown the court order.

Semedlyaev did mention then that it was widespread practice for the FSB to first place somebody in administrative arrest, and then to bring more serious criminal charges.  There appeared no grounds for fearing this, but “anything is possible”, the lawyer said.

That anything is possible under Russian occupation has now been confirmed by Semedlyaev’s colleague Aider Azamatov, who spent all day on 26 April trying, in vain, to find Steshenko.  The latter, he explained had been “abducted by unidentified individuals after serving administrative arrest”.

Azamatov finally tracked down some information in the Zheleznodorozhny District Court in Simferopol, with this yet again different from the first two versions (1 – that they suspected that the photo didn’t match; 2 – that he had been smoking at the station).  This time, the charge was under Article 19.3 of Russia’s Code of Administrative Offences – disobeying the legitimate demand of a police officer.

Supposedly at the bus station, near the railway station, he was approached by police officers who said he was smoking in a place where this is not allowed, and told him to come with them to the police station. He refused and, according to the police, tried to push them away when they tried to force him into their car.

According to the documents, Steshenko said that he didn’t want a lawyer, would represent himself, admitted guilt and was supposed to get a copy of the court ruling.  As Azamatov notes, all of this is simply perfect for the police and courts and he believes it possible that Steshenko was promised a fine if he rejected a lawyer and admitted the charges.

If this was the reason for such behaviour, he was deceived.  He was sentenced to 12 days administrative arrest and did not receive a copy of the court ruling.. All of this is particularly ominous as the jail term has ended, and Steshenko has vanished.  Both the Russian border administration and the FSB are claiming that they have no idea where he is, and Azamatov has no choice but to report his abduction to the police.

There have been many cases, such as those of Ukrainian filmmaker Oleg Sentsov and three other opponents of Russia’s annexation of Crimea, Yevhen Panov and Andriy Zakhtei and others, where men have been kept hidden until the most obvious torture marks have disappeared.  Steshenko was seen just two days ago, so this may not now be the reason, but his disappearance is obviously of great concern.

According to Steshenko’s mother, her son is not politically active, and has not been a soldier nor volunteer in the zone of military conflict in Donbas.  He was hoping simply to visit a female friend originally from Kharkiv who lives in Crimea, and seemingly not for the first time.

Back In 2016, the Crimean Human Rights Group published advice to Ukrainians visiting Crimea in which they noted that Russia’s ‘anti-extremist’ and ‘counter-terrorist’ legislation was dangerously vague, applied selectively and for political reasons. For that reason, it was impossible to hope for any fair judicial assessment in Crimea at present.