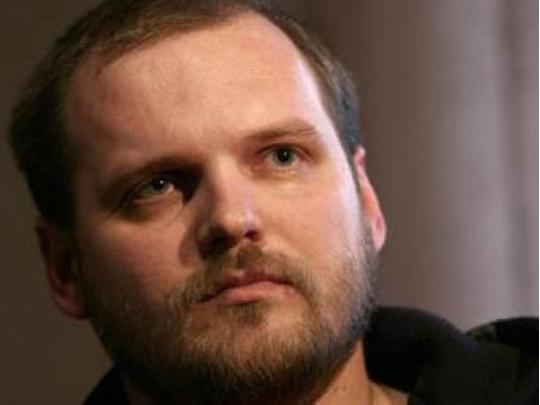 38-year-old Dzmitry Halko was arrested on 22 April on the Ukrainian-Belarusian border and is facing charges of ‘attacking a police officer’, with many assuming the arrest to be in fact linked with his role in Belarusian Partisan and other independent Belarusian publications.

Halko is both Ukrainian and Belarusian by nationality, and has Belarusian citizenship.  He has been living in Mariupol, Ukraine for some time, with his Ukrainian wife, Julia Garkushka, and their two-year-old son, but has parents and two much older sons in Belarus.  He took part in Euromaidan and over the last four years has provided coverage of the Russian-backed military conflict in eastern Ukraine, working as a fixer for Kyiv Post, the UK’s Times and other publications.

According to Kyiv Post journalist Oleg Sukhov, Halko joined Belarusian Partisan after the murder in Ukraine of the paper’s founder Pavel Sheremet in July 2016.  Sukhov says that “Halko’s problems began after he transformed Belarusian Partisan into the most opposed to the regime and most pro-Ukrainian Belarusian publication and actively covered the Spring protests against the so-called law on parasites”.

There are conflicting reports about whether he voluntarily left Belarusian Partisan, or was dismissed, though in either case this appears to have been in connection with his hard-hitting articles critical of the regime under Alexander Lukashenko.

This crackdown is ostensibly over an incident in November during a birthday party to celebrate his son Jan’s 15th birthday.  District police officers turned up at the flat in Minsk, which also housed the Belarusian Partisan server, with the initial pretext being that neighbours had complained about the loud music.  An argument broke out, after which an armed police unit burst into the flat, with a number of people present sustaining injuries.  The police claimed that Halko had attacked one of the officers who first turned up, with the latter’s mobile phone broken during the conflict.  Halko himself denied this and said that he had merely grabbed the officer’s hand.

There were initially administrative proceedings over this, with Halko sentenced for supposedly using foul language.  He himself considered that the entire police visitation was linked with his professional activities.

Although there were suggestions in the media that the authorities were planning criminal charges, there had been no police summons or any other indication that Halko was, as is claimed, on the wanted list.  He had travelled between Ukraine and Belarus many times, and had never tried to conceal his critical attitude to the Lukashenko regime.

It is not clear why the regime has decided to come down hard on him now, but it can be safely assumed that the so-called ‘attack on a police officer’ is merely a pretext – one that could, however, imprison him for up to six years.

The level of secrecy is also disturbing.  Contact with Halko was lost after the train he was travelling in on 22 April reached the Belarusian border and it was 24 hours before his family even learned that he had been detained.  There remains very little information, though his mother reported on 27 April that Halko has been moved to a remand prison in Minsk.

While Halko’s criticism of the Lukashenko regime and his links with Belarusian Partisan are probably behind this arrest, it comes after other worrying developments linked with Ukraine.   In August 2017, Russia’s FSB abducted 19-year-old Ukrainian student Pavlo Hryb from Belarus, with the chances of this having been achieved without the collaboration of the Belarusian authorities near nil. Hryb remains in Russian detention, facing grotesquely absurd charges, with Russia ignoring the European Court of Human Rights order that it allow Ukrainian doctors to examine the lad who has several serious medical conditions.