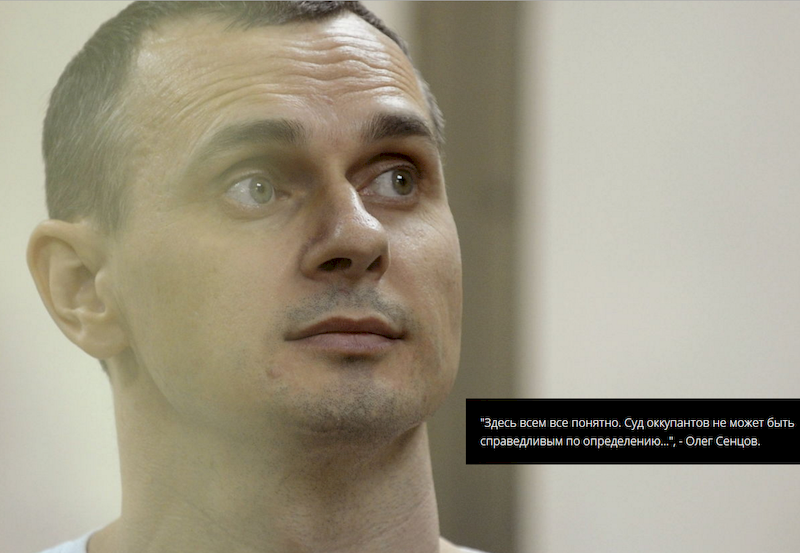 Fans visiting the 2018 World Cup this summer are to be ‘protected’ by Cossacks similar to those who helped Russian soldiers invade Ukrainian Crimea in 2014.  Hardly an accidental choice of thugs considering that the Kremlin has tried to protect itself against criticism by hiding Ukrainian political prisoners like Ukrainian filmmaker Oleg Sentsov and civic activist Oleksandr Kolchenko thousands of kilometres away from Moscow.

Russian President Vladimir Putin is hoping to keep Sentsov and around 70 other Ukrainians illegally imprisoned in Crimea and Russia out of the focus during the FIFA World Cup in June and July.

It effectively has the International Football Federation’s backing on this.   FIFA rejected calls to relocate the World Cup, and now simply repeats its mantra about keeping politics out of football.

This is a craven cop-out when Ukrainians have been imprisoned, many after brutal torture, for peacefully resistance to an invader, for their religious faith or simply because the FSB needed victims for their latest Ukrainian show trial.

The Kremlin has ensured that the most prominent Ukrainian political prisoners, like Oleg Sentsov and Oleksandr Kolchenko, are imprisoned beyond the Arctic Circle or in the Far East, and that the Russian population hear either lies from the state-controlled media about supposed ‘terrorists’, or nothing at all about them.

Putin needs the World Cup to be a success both for domestic consumption, and for the international community.

That makes it a good opportunity to seek the release of Sentsov, Kolchenko and other political prisoners and to counter the lies told about them.

The World Cup begins just over a month after the fourth anniversary on Sentsov’s arrest in Simferopol, Crimea on 10 May 2014.  The world-renowned filmmaker and father of two was one of four opponents of Russia’s annexation of Crimea who were seized in May: first Oleksiy Chyrniy  and Gennady Afanasyev, and finally civic activists Oleksandr Kolchenko,

There were particularly absurd elements to the FSB ‘plot’ such as the concentration on the right-wing and ultra-nationalist ‘Right Sector’.  There was nothing to suggest any Right Sector presence in Crimea, nor any involvement by any of the men in it.  The charge in the case of Kolchenko was particularly grotesque since the young man is a committed anarchist with pronounced left-wing views.

Details on how to write to Oleg Sentsov and Oleksandr Kolchenko here.

More about Sentsov and links to information about other prisoners can be found here.

For those visiting the World Cup games, it is important to realize that freedom of speech and other fundamental liberties are seriously restricted in Russia, and caution should be taken.