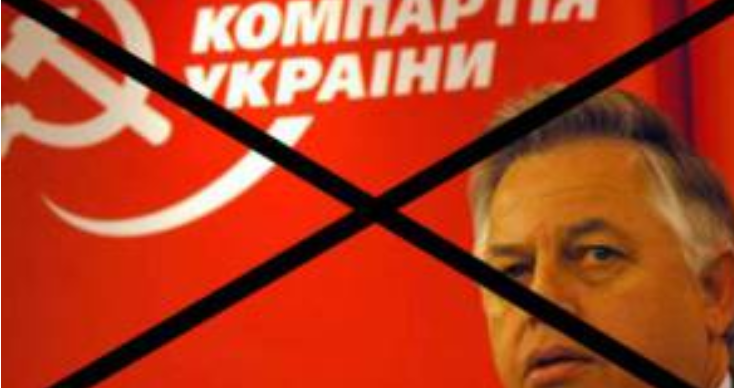 Searches have been carried out, on the eve of Victory Day, at the homes of Petro Symonenko and other leading Ukrainian communists.  According to the Security Service [SBU], this was in connection with a previously unreported criminal investigation into very serious charges, though the grounds for those charges remain largely unclear.

The SBU first reported the searches around midday on 8 May, stating that they were over criminal proceedings on charges of treason (Article 111 under Article 109 § 1 of Ukraine’s Criminal Code) and of actions aimed at violently overthrowing the constitutional order (Article 109 § 1).

“During the investigation, law enforcement officers identified the mechanism of the organization, on instructions from Russian overseers, of paid protests to destabilize the socio-political situation in Ukraine, aimed at the violent change and overthrow of the constitutional order or seizure of state power.  The investigation had also received information about involvement in anti-state activities by members of the Communist Party of Ukraine.”

Several searches were carried out in Kyiv and the Kyiv oblast during which, the SBU asserts, it “uncovered propaganda material with banned symbols of the communist totalitarian regime which were planned, at the commission of Russian overseers, for public circulation on 9 May in order to destabilize the socio-political situation in the country and to provoke violent clashes between activists of political formations”.

It is interesting that photos of material found during the search were attached to this report, although it was only in a later report from the evening that the SBU stated that propaganda material “aimed at the violent change and overthrow of the constitutional order or seizure of power” had been found.  This was reported to have been as well as a pistol with a silencer and 120 bullets.

The leaflet in question, if genuine, is certainly disturbing.  It has the communist symbols which are illegal in Ukraine and the words: “Communist Party of Ukraine.  The authorities aren’t hearing you?  Take up a weapon!”.

The latter report then slips from a criminal investigation into an entirely different genre.  Vasyl Hrytsak, Head of the SBU is quoted as saying that “the Kremlin virus of paid ‘state coups’ in Ukraine has found the latest ‘organism’.  However, unlike his predecessors, the Moscow overseers no longer trust Symonenko with a missile-thrower since they fully realize the clown-like nature of the latest candidate for the role of Russian ‘Aurora’ in Kyiv.”

There is even more rhetoric in the reaction from the Communist Party which reports that “oprichniks of the oligarch-Nazi regime burst into the CPU offices”, calls them “gestapo men” and the Kyiv government a “junta”.  The CPU statement makes no mention of the above-mentioned leaflet, and asserts that the searches were aimed at disrupting the Victory Day march on 9 May.

The same site gives a list, in Russian and Ukrainian, of slogans for both 1 and 9 May.  A number of them make highly contentious assertions, but none calls for any violent action.  It is as yet unclear whether the CPU would confirm or deny authorship of the leaflet allegedly found in large numbers, calling for people to “take up arms”. Given the ban, under Ukraine’s controversial decommunization laws, on communist symbols, it would be hard to think of anything more foolish than to produce such leaflets.

Whatever our opinion of the Communist Party, the SBU is talking about grave crimes for which evidence would need to be presented in court.  It remains to be seen whether any sequel to Tuesday’s investigative activities is planned.

Ukraine’s Communist Party was banned on 16 December 2015, however there appears to still be an appeal outstanding before the ban comes into force.  This enables the party to still have an office, official website, etc. and also delays the inevitable application to the European Court of Human Rights which Ukraine is very likely to lose.

The Justice Ministry had applied for the ban, asserting that “the Communist Party of Ukraine [CPU] carries out actions aimed at changing the constitutional order through violent means; violating the sovereignty and territorial integrity of Ukraine; propaganda of war, violence and incitement to inter-ethnic enmity and encroachment of human rights and freedoms, and members of CPU systematically make calls to create armed formations”.   There was nothing to indicate what evidence had been provided for such claims.  This is despite a criminal investigation having been launched against Symonenko back in August 2014 over the same alleged calls to armed action aimed at overthrowing the government, as well as of encroaching on Ukraine’s territorial integrity.

In July 2015, the Justice Ministry had issued an order that stripped the Communist Party and two other linked parties of their registration, and therefore their right to take part in the coming local elections. The order cited the controversial Law on condemning communist and National-Socialist (Nazi) totalitarian regimes in Ukraine and on prohibiting propaganda of its symbols” as its justification for depriving the parties of their electoral rights.

As predicted, the law was later given a devastating assessment by the Council of Europe’s Venice Commission which found that it violated democratic standards.

The joint interim opinion stressed that Ukraine has the right “to ban or even criminalise the use of certain symbols of and propaganda for totalitarian regimes”.  However, the Law’s scope is much too broad and the sanctions, including long terms of imprisonment, envisaged too severe.

The law remains in force and was used in May 2017 to sentence a Lviv student to a real, though suspended, sentence for photos and other material with communist symbols posted on Facebook.

Given the events on Tuesday, it is possibly significant that the first reported application of the law was almost exactly a year ago.   There was a violent attempt in Cherkasy by far-right activists to prevent veterans from unfurling a communist flag marking Victory Day, however only one criminal investigation was initiated, with that being under the above-mentioned decommunization law, in connection with the communist flag.