Russia doubles war crimes against Crimeans forced to serve in occupier’s army10 thousand Crimeans forced to serve in Russian occupying armyCrimean Jehovah’s Witnesses told to renounce their faith or serve in occupiers’ armyRussia breaches international law forcing Crimeans to serve in occupying army“Do You Still Want This War?” Anti-War Activities in Russia, 3-9 July 2022After violently seizing Crimea, Russia accuses peaceful Crimean Tatars of ‘terrorism’ for defending political prisoners Covert mobilization and Ukrainian conscripts from occupied Crimea sent to die in Russia’s war against Ukraine Russian Prosecutor General given power to close media for ‘discrediting the army’ through truth about the war against UkrainePatterns of Resistance are changing. A Digest of Protests in Russia (17-24 June 2022) Russian legislative changes would mean school leavers can officially be sent to fight in Ukraine Desperate plea from the wives of Donbas men seized and sent to fight Russia’s war against Ukraine“We’re not celebrating today” – digest of Russian protests (early June 2022)ECHR rules too late against Russia’s notorious ‘foreign agent’ law and hardly moves over violations in occupied Crimea Russia declares peaceful Crimean Tatar organization ‘terrorist’ to escalate repression in occupied parts of Ukraine Crucial judgement for Jehovah’s Witnesses as Russia tries to deny ECHR jurisdiction for its war crimes in Ukraine Russia deports Ukrainians to occupied Donbas, forcing them to fight its war against Ukraine Internal fight against ‘ZEvil’ – digest of Russian protestsRussia is forcibly ‘mobilizing’ Ukrainians from occupied territory to fight its war against Ukraine Seven Jehovah’s Witnesses put on trial in Russian-occupied Crimea for studying the Bible Russian Rule of Lawlessness in Occupied Crimea and Donbas
• Topics / Freedom of expression
• Topics / Human Rights Abuses in Russian-occupied Crimea 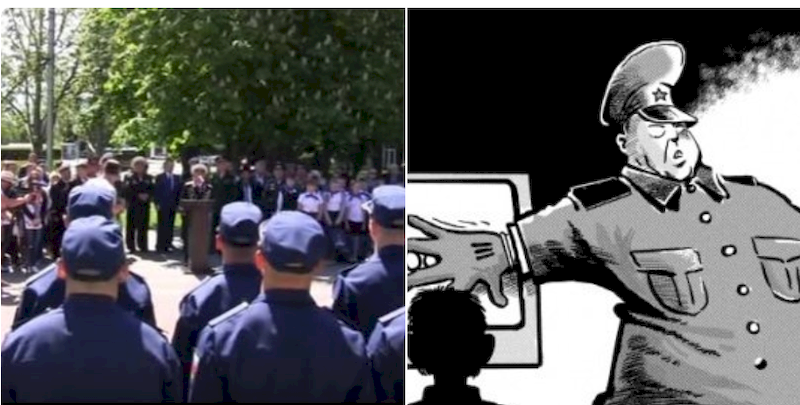 Russia as occupying state is not only violating international law by conscripting Crimeans into its army, but has placed material from the Crimean Human Rights Group informing people of this on its huge ‘Register of prohibited information’. It has threatened that if the material is not removed, the Group’s webpage will be blocked.

Roskomnadzor, Russia’ effective censor, sent notification on 10 May of the ban on three texts and demanding that the owner of the site used by the Crimean Human Rights Group be informed of the need to remove the material within 24 hours.  The ban was formally sanctioned by Antonina Lantratova, ‘judge’ of the Russian-controlled Yevpatoria City Court on 21 March this year.  Unsurprisingly, the text of the ‘court rulings’ is not posted on the court’s website.

The three articles (posted in Russian) are:

The Russian Federation does not have the right to call up Crimeans, human rights activist says

The human rights activists are not so easily intimidated and call this latest move a flagrant violation of freedom of expression.  Russia is trying to prevent Crimeans receiving proper information about their illegal use of conscription.

Russia’s attempts to deny that it is occupying Crimea have been rejected by the United Nations General Assembly, as well as by all international bodies and democratic states.  The International Criminal Court at the Hague’s Chief Prosecutor concluded back in 2016 that Russia’s occupation constitutes an international armed conflict, placing it within the Court’s jurisdiction which Ukraine has recognized.

Russia is a party to numerous international documents which set restrictions on what an occupying power may do.   According to Article 51 of the Geneva Convention relative to the Protection of Civilian Persons in Time of War,  “The Occupying Power may not compel protected persons to serve in its armed or auxiliary forces. No pressure or propaganda which aims at securing voluntary enlistment is permitted”.

Conscription is a major concern for many young men and their parents, and there have also been complaints that some of them have been placed under pressure to renounce their Ukrainian citizenship.  Oleksandr Sedov from the Crimean Human Rights Group is blunt about such attempts which he calls a war crime.  The 1907 Hague Convention states unequivocally that “it is forbidden to compel the inhabitants of occupied territory to swear allegiance to the hostile Power.”

The list of rights violations in occupied Crimea is huge and includes persecution on the grounds of a person’s faith.   Following Russia’s ban on the Jehovah’s Witnesses in April 2017, there have already been a number of arrests of individual believers.  In Crimea, at least two Jehovah’s Witnesses have been ordered to provide ‘proof of change of faith’ in order to be eligible for alternative civilian service.

According to the Russian legislation illegally applied in Crimea, all young men aged between 18 and 27 are liable for conscription.  If a draft bill now before Russia’s Duma is passed, all young men could face criminal liability if they do not themselves turn up at military recruitment offices if the latter have not sent them a summons.

Over the four years since Russia’s invasion of Crimea, around 10 thousand young Crimeans have been conscripted into the Russian army, with the number rising each year both of conscripts and of sentences passed on those who seek to avoid Russian military service. One young man was fined 25 thousand roubles in the autumn of 2017 and is still forced to serve a year in the army.

Russia as occupying power has generally severely curtailed freedom of speech in Crimea, with searches, prosecutions and refusals to provide re-registration driving independent media and journalists out of Crimea.  Recent Crimean Human Rights Group monitoring found that 30 Ukrainian were often or always blocked.  The information resources involved provide truthful information about political prisoners and major rights violations in Crimea, which is also not to Russia’s and its Roskomnadzor censor’s liking.