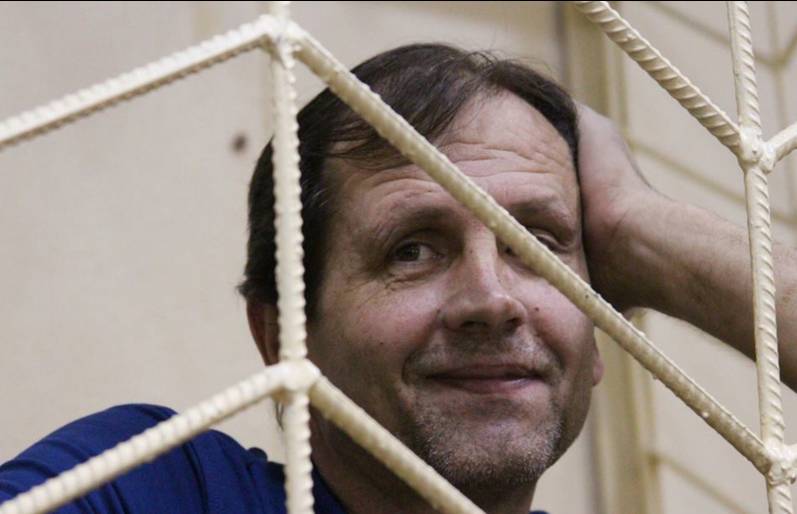 Crimean political prisoner Volodymyr Balukh was in ‘court’ again on 15 May, looking gaunt and tired after two months of hunger strike in protest at his first prison sentence on overtly falsified charges.  The new criminal charges are of ‘destabilizing the activities of the detention unit’ through an alleged attack on an officer,  though both he and his lawyers insist that he was the victim of a minor incident, not the instigator.  Balukh has faced constant harassment under Russian occupation because pf his pro-Ukrainian position and the Ukrainian flag he refused to remove from the roof of his home, and this new ‘trial’ seem aimed at revenge against a person whom the occupation regime has not been able to break.

It was doubtless important to 47-year-old Balukh that a lot of people came to the Razdolne District ‘Court’ to demonstrate their support.  He took the opportunity of passing on an address to Ukrainians in which he explained why he saw no other option for protesting against the injustice and lies.  He declared hunger strike on 14 March, but it was only on 19 March that the prison administration finally recognized his protest and moved him to a separate cell.  This was not the end of the provocation and psychological pressure aimed at discrediting him and his protest, he says, with such treatment having only intensified.

On the 25th day of his hunger strike, after consultation with Archbishop Kliment, Head of the Orthodox Church under the Kyiv Patriarchate in Crimea and Balukh’s civic defender, Balukh agreed to take a very small amount of food daily.  It is still not enough to prevent grave damage to his health, but he sees no choice at present but to continue.

The hearing on 15 May was over the new criminal case against Balukh who is charged with “destabilizing the activities of a place of imprisonment’ (under Article 321 § 2 of Russia’s criminal code).  The prosecution claims that Balukh had, on 11 August 2017, attacked the head of the temporary detention unit in Razdolne,  Valery Tkachenko and then poured a cleaning substance over him.

As mentioned, both Balukh and his lawyers point out that Tkachenko had on a number of occasions harassed and insulted him, and that the circumstances of the incident on 11 August were quite different.  Dmitry Dinze explains that the footage from CCTV cameras shows what happened originally.   Balukh was standing with his face to the wall and surrounded by police officers.  Tkachenko walked past, and, using his elbow, pushed Balukh in the back.  Balukh was pushed against the wall, almost hitting his head, and instinctively lashed out, hitting Tkachenko in the stomach.  That resulted in a conflict with mutual abuse, after which Tkachenko can be seen lashing out and hitting Balukh once more.    The video later shows Tkachenko going into Balukh’s cell, where the latter says he barraged him with some serious insults.  This appears to have been a continuation of a barrage of insults directed at Balukh’s elderly mother, other relatives, etc. and Balukh reacted by directing a canister with some cleaning substance in Tkachenko’s direction.  The lid unfortunately came off and the substance spilled on Tkachenko.

This incident was doubtless against prison rules, but hardly worth a new ‘criminal trial’.  Indeed, Dinze has learned that it was Russia’s Investigative Committee who insisted on calling the incident an attempt at ‘destabilization’.  Tkachenko himself was taken away from the detention unit after that incident, and has shown no interest at all in pushing his supposed ‘aggrieved party’ status.

Dinze is convinced that this lack of any interest simply confirms that it was the Razdolne police who wanted this – politically-motivated – criminal prosecution “in order to imprison him for a long time and send him to a prison colony far from Razdolne.”  It was with those motives that they ordered Tkachenko to make a formal complaint about a minor incident.

Volodymyr Chekryhin from the Crimean Human Rights Group reports that Balukh has faced threats of reprisals as well from the Simferopol SIZO [remand centre] where he is currently held.  The SIZO staff periodically warn him that he will face ‘punishment’ for his ‘free will’, and carry out searches in the night or early morning, clearly aimed at wearing him down.

The timing was equally suspicious.  Balukh was arrested nine days after he nailed a plaque renaming his home No. 18 “Heroes of Nebesna Sotnya St’ in memory of the over 100 Maidan activists who were killed during Euromaidan.  He rejected demands from the head of the local council to remove it.

Balukh is imprisoned in Simferopol, a fair distance from his home in Razdolne, making it effectively impossible for his elderly mother, who is in very bad health, to visit him.  She is very distressed and fears that she will never see her son again.

During the appeal hearing on October 2, the High Court in occupied Crimea revoked the sentence, having accepted the submission from lawyer Olga Dinze that Maria Bedritskaya should not have been the judge, as she had been involved in earlier (equally flawed) cases against Balukh.

Balukh was very fleetingly released under house arrest, only to be taken back into custody on 16 January 2018, after ‘judge’ Yelena Tedeyeva from the same Razdolne District Court,  passed the same sentence as had Bedritskaya on 4 August 2017, namely 3 years and 7 months in a low security prison colony and a 10 thousand rouble fine.  The conviction has been internationally condemned as very clearly linked with Balukh’s pro-Ukrainian position – and the Ukrainian flag.