Ukraine hammered by Court in Strasbourg for endless torture of life prisoners US imposes sanctions on former Yanukovych aide Andriy Portnov for corrupting Ukraine’s courts What is next?Zelensky imposes sanctions against men who fought for Ukraine in Donbas Prisoners’ rights to health protection and medical care in 2014-2021: KHPG reportPrisoners’ rights in Ukraine 2014-2021: KHPG reportAppeal of All-Ukrainian Council of Churches and Religious Organizations on solving the problem of innocent convictsJudicial reform in Ukraine is “doomed” if current bill gets passed – Venice Commission June 3 Letter to the Members of the Verkhovna Rada of UkraineThe Bill on SBU is unacceptable, it should be buried Zelensky"s reform risks dissolving notorious court but leaving judicial corruption intactUkraine’s most malicious miscarriages of justiceProtests throughout Ukraine following 7-year sentence against civic activist Serhiy SternenkoSo what will “New SBU” be?What is wrong with the bill on SBU?2020: There was no worse year in the realm of human rights after the Revolution of DignityUkraine found in bulk violation of the prohibition of torture over denial of justice to life prisonersExpert opinion (Amicus Curiae) on the application and interpretation of the case-law of the European Court of Human Rights in criminal proceeding № 52017000000000361Opinion on the political motives of criminal persecution and violation of human rights in the case of Sergiy PashinskyViktor Lozinsky, the ex-MP convicted of murder, wins in local elections in Ukraine
• Topics / The right to a fair trial

The Only Way to Improve Ukraine’s Courts 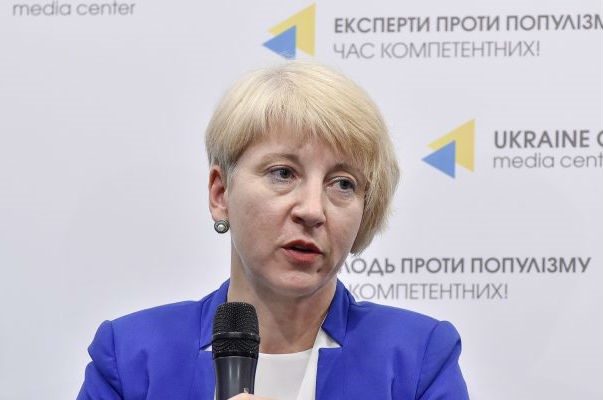 Judge Larysa Holnyk filmed and revealed an attempt to bribe her by a representative of the mayor of Poltava; she was physically attacked and had a disciplinary case opened against her. Here she speaks on May 30, 2017, in Kyiv, Ukraine. Credit: Ukraine Crisis Media Center

No state can function without justice, and Ukraine is no exception.

For years, corruption and the absence of justice, together with Russian military aggression, have held back the country.

After four years of struggle and numerous pieces of legislation, there has been little progress.

Ukraine started out with a good idea: reformers wanted to create a new Supreme Court from scratch and vet the remaining judges through a comprehensive procedure, checking their competence and integrity. The process failed in its implementation however.

With almost 80 percent of new Supreme Court judges having been judges before, as well as a majority at the cassation level and at least twenty-seven who do not meet the basic integrity criteria that was set out, this can hardly be called renewal. Civil society thoroughly analyzed this process and called for more transparency and objectivity, as well as higher standards for the assessment.

But in vetting the lower courts judges, the High Qualification Commission of Judges (HQCJ), a judicial council responsible for the process, significantly lowered standards and jammed thousands of interviews into a few months. Recently, the HQCJ conducted interviews with almost 700 judges, and only found sixteen (or less than 2.5 percent) of them not qualified. In the next two months, the HQCJ is planning to conduct around 2,000 more interviews. The Public Integrity Council, a special civic body that conducts preliminary integrity assessments of judges, called this “fake” and “window dressing,” and suspended its participation in order to not legitimize the process.

The reason for this failure is simple: the lack of will by President Petro Poroshenko’s administration, and the inability of judicial governance bodies to act in the people’s best interest.

Even worse, the few righteous judges who actively oppose corruption are threatened and attacked by the old system. Judge Larysa Holnyk, who filmed and revealed an attempt to bribe her by a representative of the mayor of Poltava, was not only physically attacked, but had a disciplinary case opened against her by the High Council of Justice (HCJ), a body that is supposed to protect judicial independence. Judge Vitaliy Radchenko, who gave permission to search the luxurious mansion of the notorious head of the District Administrative Court of Kyiv, Pavlo Vovk, was disciplined, and his wife, also a judge, was dismissed as a result of a disciplinary proceeding by the HCJ shortly after the warrant was issued.

But this is hardly a surprise, given that some of the HCJ members’ integrity is questionable. Palvo Hrechkivsky is accused of trying to settle a case in a court for $500,000 with the then president of the High Commercial Court of Ukraine (and now Deputy Head of the “new” Supreme Court Bohdan Lvov), but still serves as an HCJ member. The Rada’s appointment of Oleksiy Malovatskiy, a Poroshenko Bloc nominee, was allegedly based on bribery, as a recent investigation revealed. The head of the HCJ, Ihor Benedysiuk, appointed by Poroshenko, still cannot prove he gave up his Russian citizenship after being a judge in Russia before 1994.

Poroshenko’s strong opposition to judicial independence and inability to deliver have damaged his reputation. Months before the March 2019 presidential election, people would literally vote for anybody but him; according to polls, he will lose to any candidate from the top six in the second round.

Nonetheless, the president has dug in. He insists that the same failed bodies be responsible for the selection of judges for the anticorruption court. This is despite the very strong and clear position of the international community, including the Venice Commission, IMF, and World Bank, that international experts should play a large role in the selection process. While Poroshenko cries that international participation in the selection process would infringe on Ukraine’s sovereignty, the average voter disagrees; four times as many people trust the selection of anticorruption court judges to international experts than to judges from Ukrainian bodies. And six times as many people trust civil society representatives over judges when it comes to the judiciary’s renewal.

The unvarnished truth is that direct international and civil society involvement in the selection of judges and law enforcement bodies is the only way to ensure the successful reform of any law enforcement authority. All of the successful rule of law reforms that Ukraine has embraced since 2014—NABU, SAPO, and the patrol police—had international involvement in the selection process, as well as strong civil oversight.

This formula works with the selection of judges, too. The president recently appointed two well-known professors as judges for the Constitutional Court. Another professor, a former ECHR ad hoc judge, was selected as president of the court. Since then, the court has made a number of good decisions; it found Yanukovych’s laws that unduly concentrated power and the infamous “Kivalov-Kolesnichenko” language law unconstitutional. The reason for the court’s success? The commission that selected the judges included Honorary President of the Venice Commission Hanna Suchocka, as well as other well-known and respected experts, and was under strong civil society oversight.

If Ukraine doesn’t pass a real anticorruption court bill in the next two months, the country will likely not receive another tranche of IMF monies and economists predict that it will have grievous consequences for the economy, which is barely growing anyway.

But Ukraine needs more than an anticorruption court. It needs a comprehensive reboot of its judicial bodies, not the fake one that Poroshenko has presided over.

Now is not the time to let up. The international community has been consistent and backed civil society. Still, we need your support now more than ever before.  As Stanford University professor Michael McFaul rightly argues, “We must deepen our engagement now—to advance the cause of democracy.”

Mykhailo Zhernakov is the director of the DEJURE Foundation, a member of the board of the Reanimation Package of Reforms, and a former judge in the Vinnytsia District Administrative Court (2012-2015). He tweets @mzhernakov.Editor’s note: He is a member of the Public Integrity Council.
Share this
x