Blogger fined for saying the USSR invaded Poland in 1939 takes Russia to Court in StrasbourgRussia’s Supreme Court rules that the USSR did not invade Poland in 1939Russian fined for reposting that the USSR & Nazi Germany invaded PolandRussia says Poland, not USSR, was Hitler’s Ally and Responsible for HolocaustKremlin-funded Sputnik Int. claims West criticizes Stalin to weaken Russia & its leadershipKremlin’s proxies purge memory of victims of Holodomor and political repressionRussia’s ’new approach’ to Stalin and extended secrecy about his victimsStalin Museum: Putin’s Russia Immortalizes Bloody DictatorAnger and Protest over Stalin Monument in YaltaPortrait of Stalin appears in Russian-occupied CrimeaStalingrad as latest step in re-glorification of tyrantNeo-Nazis in Moscow’s ServicePro-Russian separatists start their own anti-Semitic TV channelPro-Russian, anti-Roma, anti-Semitic and hunting out Ukrainian speakersThe Donetsk anti-Semitic leaflets – what should not be overlookedEast Ukraine crisis and the ’fascist’ matrixRussia continues its false narrative as defender of oppressed minorities in UkraineRussian propaganda claims Jewish organizations supporting Maidan are bringing on "second Holocaust"The Crimean referendum’s neo-Nazi observersPutin’s Neo-Nazi Helpers
• Topics / Freedom of expression
• Topics / News from the CIS countries 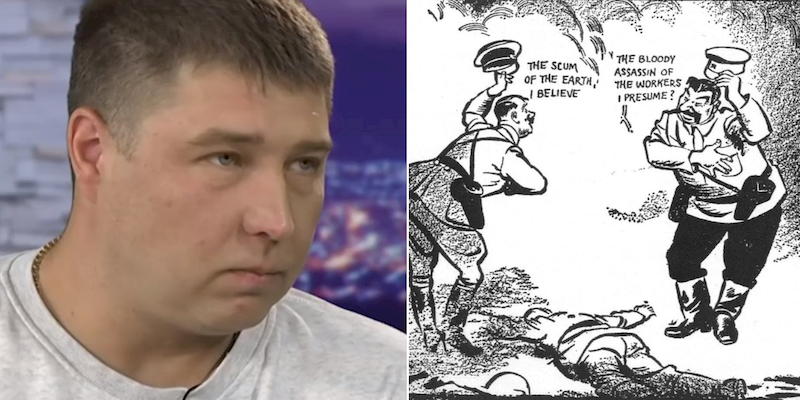 The Czech authorities have found no grounds for giving Vladimir Luzgin political asylum, and say that they cannot “get into a discussion about historical facts”.  No ‘discussion’ is, in fact, required, since 38-year-old Luzgin was prosecuted in Russia for reposting a text that quite correctly states that both Nazi Germany and the Soviet Union invaded Poland in 1939.

Luzgin explains that as well as refusing to discuss historical issues, the Czech Interior Ministry also claims that he has not provided sufficient proof of persecution.  They were influenced, for example, by the fact that Russia had not issued an Interpol Red Notice (which tells other countries he is wanted by Russia).

He suspects that “a political factor” was most important in the decision, and says that for Russians trying to seek political asylum, it is not a good idea to try the Czech Republic.  While Luzgin goes into no details, the current Czech President Miloš Zeman is known for closely following the Kremlin line, including with respect to Russia’s annexation of Crimea and aggression against Ukraine.

As of 17 May, when he spoke with Timur Olevsky, Luzgin had 14 days to decide whether to appeal the ruling.  He is clearly hoping that another country will offer him asylum, but will lodge the appeal if not.

He has not paid the fine imposed on principle, and says that he does not want his money to be stolen or to be spent on the war in Ukraine or in Syria.  This is “a principled stand” and one that makes it likely that he will face problems if he is forced to return to Russia.  The Czech authorities may not want to discuss historical issues, but would they really wish to see Luzgin imprisoned because he was unwilling to pay a fine for telling the truth?  Luzgin also believes that he can, in any case, expect further persecution for his clearly expressed opposition to the regime under President Vladimir Putin.

This regime, he says, has managed to gain control over everything – all the media, the courts, enforcement bodies and the army.  They haven’t yet taken control of the Internet, but are trying.  He is convinced that they want to use his case as an example, to frighten others so that they understand that the regime is watching everybody “even ordinary people”.

Luzgin, a car mechanic and blogger from Perm in Siberia, was convicted on June 30, 2016 and fined 200 thousand roubles for reposting an article in 2014 on his social network page entitled ‘15 facts about Bandera supporters, or what the Kremlin is silent about’.  Although it is likely that it was the mention of Ukrainian nationalist leader Stepan Bandera that initially attracted Russian FSB interest in Luzgin, the criminal charges were brought over the following lines in the reposted text:

Luzgin was the first person in Russia to have been convicted under the highly controversial law on ‘Rehabilitation of Nazism’.

This law, officially authored by Iryna Yarovaya who is notorious for other repressive legislative initiatives, was signed into force on May 5, 2014. The new Article 354.1 of the criminal code it introduces carries a sentence of up to 3 years imprisonment for what is termed ‘public denial or approval of the facts established by the sentence of the Nuremberg Tribunal’.  The same norm makes it possible to prosecute somebody for “spreading knowingly false information about the activities of the USSR during the years of the Second World War”.  There is no guidance as to how something is determined to be false.

The law was condemned from the outset by the Sova Centre as aimed at stifling historical discussion and restricting freedom of speech, and the fact that Luzgin has been prosecuted for telling the truth demonstrates that this is an offensive against historical facts that the regime wants to muffle.

The first court considered the statement about the Soviet Union to have collaborated with Nazi Germany in invading Poland to be “knowingly false information”, claiming as justification that the statement contradicted the facts set out in the Nuremberg Tribunal sentences.  That verdict was upheld by Russia’s Supreme Court on September 16, 2016, the 77th anniversary of Nazi Germany’s s invasion of Poland, 17 days before the anniversary of the Soviet invasion from the east.

Luzgin has now applied to the European Court of Human Rights, asserting infringement of his right to freedom of expression under Article 10 of the European Convention.  Violation is also alleged of Article 7 of the Convention, guaranteeing punishment solely on the basis of law.