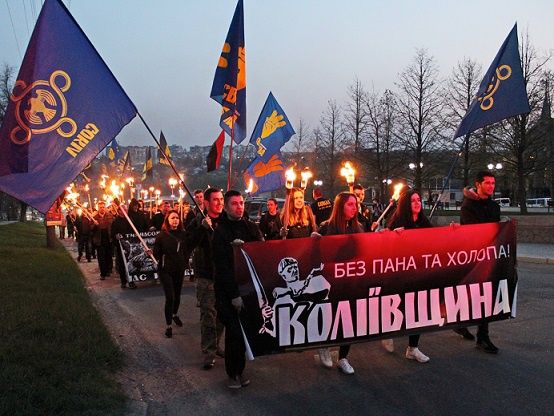 The VAAD Association of Jewish Associations and Communities and a number of other Ukrainian Jewish organizations have expressed strong concern over the decision by the Kyiv City Council to hold events marking 250 years since Koliyivshchyna, a rebellion which resulted, among other things, in the 1786 Uman Massacre of Poles, Jews and Greek-Catholics.  The proposal was put forward by two deputies from the far-right Svoboda party, with the explanatory note provided to colleagues providing a highly specific colouring to historical facts.

Koliyivshchyna was the third of three uprisings against Polish rule by haidamaky or armed groups of Cossacks and peasants, who have been described by historian  Oleksiy Sokirko as “land pirates”.

This blunt assessment of the haidamaky is far from the position taken by the initiators of this decision – Yuri Sirotniuk and Volodymyr Bokhnyak.  They say that the decision regarding the 250th anniversary is aimed “at honouring fighters for Ukraine’s freedom and national and social justice; the study and honouring of the struggle of the Ukrainian people against foreign invaders over all periods of their history; the preservation of national memory; consolidation and development of Kyiv residents’ historical awareness.”

It seems likely that at least some, if not most of the two-thirds majority of deputies who voted for the decision on 17 May 2018 did not remember much about Haidamaky, except that the great poet Taras Shevchenko wrote about them.  They could have read Sirotiuk’s explanatory note without becoming any the wiser. Effectively no mention is made in that document of the thousands of Poles, Jews and others killed during the “liberation of the city”.  The presentation is pitched to resonate with Ukrainians currently facing aggression from Russia, while being couched in terms of a national liberation struggle.  The explanatory note begins, for example, by explaining that 29 May 2018 marks “250 years since Koliyivshchyna, the uprising of Ukrainians against the arbitrary rule of the Polish occupiers and a response to the social, religious and national oppression of Ukrainians from the Polish Rzeczpospolita”.

The statement from VAAD and six other Jewish organizations is critical of the explanatory note’s style of simplistic glorification of those who took part in this “uprising of Ukrainians”.

The explanatory note asserts, for example, that “national consciousness, based on one’s own historic fate which is different from that of neighbours, is a mandatory condition for ethnic unity”.

It would be hard, the Jewish organizations believe, to see the approach proposed by the Kyiv City Council as balanced and inspired by the wish for historical objectivity. While referring to Taras Shevchenko as supposedly backing their position, the ‘Svoboda’ authors of the explanatory note ignore the fact that Shevchenko called Koliyivshchyna “a bloody tragedy”.

The uprising was in fact characterized by brutal violence on both sides, and by the mass killing of the non-Orthodox population (Catholics; Greek-Catholics; Jews), as well as of Orthodox and old believers.

“What is referred to in the explanatory note as “the liberation of Uman” was accompanied by the killing of over ten thousand Poles, Greek-Catholics; Jews; as well as Orthodox believers suspected by the haidamaky of supporting or sheltering ‘infidels’. The Uman Massacre, which was only one of the episodes of Koliyivshchyna, has remained in Jewish national memory as one of the most terrible events in the history of the region’s community. The crushing of the uprising was also accompanied by brutal repression from Poland and Russia.

The treatment in the explanatory note of complicated and bloody historical events seems outdated and following a Soviet tradition which is destructive in the context of modern trends and the development in Ukraine of a civilized civic Ukrainian nation”, VAAD wrote in their original statement.

They warn that the glorification of Koliyivshchyna has its roots in Soviet ideology and that Sirotiuk’s prioritising of ;ethnic unity; is potentially very dangerous, including at a time where Ukraine is facing foreign armed aggression.

Such a fixation on ethnic unity “undermines the civic unity of the Ukrainian nation and inter-ethnic harmony.  It adversely events the country’s image abroad and only plays into the hands of the aggressor”,

It has become accepted practice in Europe where tragic historical events are concerned, to avoid glorification and instead concentrate on memorial events honouring the victims.

“The official policy on memory in Ukraine is developing in that direction, and rejecting Soviet practice which Sirotiuk is proposing that the Kyiv City Council reinstates”.

VAAD and the other Jewish organizations call on the Kyiv City Council to reject all ceremonies and festive events, with these replaced by events to honour the victims of Koliyivshchyna of different ethnic origin and faith, such as inter-faith prayers for those victims.  There should also be academic studies and conferences that are not constrained within the ideological framework of the neo-Soviet approach that Sirotyuk is proposing.

VO Svoboda has a long tradition of glorifying Koliyivshchyna.  On 16 April, it held its eighth ‘Koliyivshchyna March’ in Uman, accompanied this time by the very far right National Corps, and using anti-oligarch slogans.  Kyiv Council deputies would be well-advised to brush up on their history before passing such ill-considered decisions.