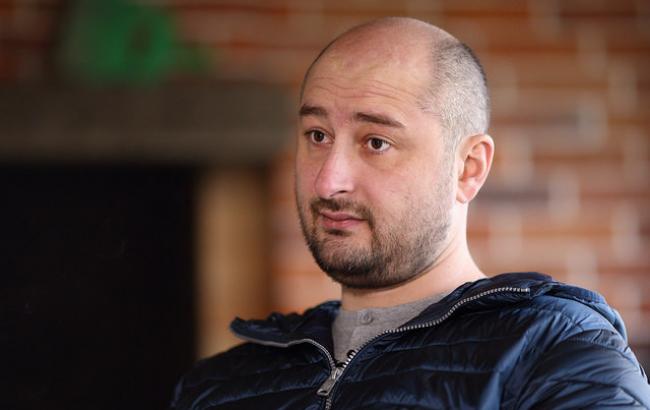 ARKADY BABCHENKO IS ALIVE  Details and commentary here If Ukraine foiled a plan to kill Russian Kremlin critic Arkady Babchenko, why the indignation?

Russian Foreign Ministry and state-controlled media have begun pushing an alternative reality version of the gunning down in Kyiv of Arkady Babchenko, Russian journalist and outspoken critic of Russia’s aggression against Ukraine and the regime of Russian President Vladimir Putin.  While western media all reported that yet another journalist vocal in his criticism of the Kremlin had been murdered, Russian audiences learned that Ukraine would probably present the killing in this way, with some politicians adding that the killing only proved how dangerous it supposedly is to be a journalist in Ukraine.  The Russian Foreign Ministry claimed that “bloody crimes and total impunity have become routine for the Kyiv regime”.   This alternative point of view was facilitated by omission in all the reports of crucial details. There was either no mention of the hysterical hate campaign that had forced Babchenko into exile, or a heavily edited and therefore misleading version of the comments that elicited public outrage.   There was also effectively nothing about Babchenko’s blunt condemnation of Russia’s annexation of Crimea which Babchenko called “unequivocally Ukrainian”, of the war unleashed on Ukraine  and of Putin’s reliance on war as his “only instrument of influence” within the Russian Federation.

Arkady Babchenko was shot in the back as he returned to his Kyiv flat in the evening of May 29 in what bears all the hallmarks of a contract killing.

He was reportedly returning from the shops and had probably just opened the door to the flat when the killer struck.  Babchenko’s wife had been in the bathroom and came out when she heard the gunshot and found her husband lying there.  He died in the ambulance on the way to hospital.  He was just 41.

Arkady Babchenko had fought in Chechnya before he left military service and turned to journalism, acting as war correspondent in many conflicts including Russia’s war against Georgia.  He had written about Ukraine from the time of Euromaidan and also provided extremely penetrating analysis of the propaganda machine which became one of Moscow’s weapons in its war against Ukraine.

He had been forced to leave Russia in February 2017 after a vicious campaign against him over comments that essentially expressed his condemnation of the Putin regime, state-controlled propaganda media and Russia’s military involvement in Ukraine and Syria.

In Kyiv he worked for the Crimean Tatar TV channel ATN and continued to comment on the situation in Russia in blogs and interviews.  If, as even the Russian media found different to dispute, the killing was over his journalist activities, then his subject matter does point in one direction alone.

A particularly virulent hate campaign against him, accompanied by threats, calls to strip him of his citizenship and to arrest him, began over comments he made on Facebook after a plane crash in December 2017.   The Russian Defence Ministry’s Tupolev Tu-154, which crashed shortly after taking off from Sochi, was carrying 64 members of the Alexandrov Ensemble, journalists and military officials and was headed for Syria.  The Alexandrov Ensemble had been involved in propagandizing Russia’s annexation of Crimea and was now supposed to be going to play for the ‘brave soldiers defending law and stability’ in Syria.  Many of the journalists also on that fatal flight worked for Russian propaganda media like ‘Pyervy Kanal’ and the Defence Ministry-linked ‘Zvezda’, that had pushed the Kremlin line on Crimea and also provided warmongering propaganda about the war in Eastern Ukraine. The disaster resulted in a fair number of negative comments about the activities in Ukraine and Syria of Russia’s military and propaganda machines, including the comments, posted on Facebook, by Arkady Babchenko.

He wrote that he could not feel sympathy for these Ministry of Defence employees, “representatives of leading propaganda agencies” and reminded his readers of the thousands of deaths that Russia had brought to Ukraine, and the civilians whom Russia was killing in Syria.

It was very noticeable that immediately after the disaster the Russian state media muffled information about its possible causes and never really allowed their audience to consider the possibility of a terrorist attack.  Putin’s new military campaign in support of Syrian President Bashar al-Assad regime had only begun a few months earlier, and this was presumably regarded as a taboo subject.  Instead the Russian media, politicians and others concentrated on such negative comments.  The version of this presented by the Kremlin-funded Russia Today in its report on Babchenko’s murder makes it clear how the hatred was incited.  The Russia Today report mentions only that Babchenko said that he “didn’t sympathise”, “didn’t give a damn” and that he had reacted similarly after the death of Russia’s ambassador to the UN Vitaly Churkin, without letting Babchenko’s clear grounds be heard.

The backlash against Babchenko was appalling, and the number of public threats, and even a computer game where you could beat him up, make it easy to imagine what kind of open threats of violence he received privately.

Babchenko was also threatened with criminal proceedings.  This came soon after the arrest on fabricated charges of historian and Memorial head Yuri Dmitriev, as well as numerous other politically-motivated trials, and Babchenko did not wait to be arrested and left the country, moving eventually to Kyiv.

He is not the first prominent Russian to have been gunned down in Ukraine.   Ex-Russian MP Denis Voronenkov was shot dead in Kyiv on March 23, 2017.  He had been due to give damaging testimony of major importance to Kyiv about Russia’s invasion of Crimea and aggression against Ukraine and a Russian link was widely assumed.    Such a link was only one of the possible motives suggested for the murder in Kyiv of Belarussian journalist Pavel Sheremet in July 2016.

In trying to present the killing of Babchenko as “provocation” or as an example of the “danger of being a journalist in Ukraine”, NTV and other media ignored the number of reports in the western media that mentioned the long trail of such murders of critics of the Kremlin in Russia, including journalist Anna Politkovskaya, opposition politician Boris Nemtsov and very many others.

Russia has recently been accused of using nerve gas in Britain to try to kill former double agent Sergei Skripal and his daughter Yulia.  As with the use of radioactive polonium in the 2006 London killing of former FSB officer Alexander Litvinenko, the use of the nerve agent Novichuk was interpreted by many as a deliberate message to others whom the Kremlin views as enemies.  It is certainly hard at this moment not to view the killing of Arkady Babchenko in the same light.  And as a terrible loss.